In his fiery speech at an SPD party congress last Sunday, Kuehnert said that repeated tie-ups with Merkel's party over recent years were "an endless loop ... that we have to break

In his fiery speech at an SPD party congress last Sunday, Kuehnert said that repeated tie-ups with Merkel's party over recent years were "an endless loop ... that we have to break

PIC: Kevin Kuehnert, leader of Germany's social democratic SPD party's youth organisation "Jusos" and opponent of the "GroKo", as the grand coalition between Germany's social democratic SPD party and the conservative CDU/CSU union is known in German, speaks during an extraordinary congress of the SPD in Bonn, western Germany, on January 21, 2018. (AFP)

GERMANY - Germany's Angela Merkel hopes to form a new government by late March, half a year after inconclusive elections, but if there is one man who may yet torpedo the plan, it's a 28-year-old Young Socialist.

Kevin Kuehnert has burst onto the German political scene as the passionate leader of a guerrilla campaign against another grand coalition or "GroKo" government which now spells the greatest threat to the veteran leader.

The Berlin university student heads the youth wing of the Social Democrats (SPD), Germany's second biggest party, which has reluctantly agreed to once again negotiate a role as junior partners to Merkel's conservatives.

To Kuehnert and other like-minded youth wing members such a power pact would spell a betrayal of the over 150-year-old labour party's cherished ideals that could consign it, after a string of election defeats, to the dustbin of history.

While SPD leader Martin Schulz has made his peace with the idea of playing second fiddle to "Mutti" Merkel, Kuehnert and other next-generation politicians are doing their best to derail the plan.

In his fiery speech at an SPD party congress last Sunday, Kuehnert said that repeated tie-ups with Merkel's party over recent years were "an endless loop ... that we have to break".

He urged party comrades to bite the bullet, go into opposition and "be a dwarf today so we can be a giant again one day".

With the mood in the party glum and fragile, the plan to negotiate another loveless left-right alliance was backed with a dangerously thin margin, by 56 percent of the 600 party delegates.

Now Kuehnert's rebel alliance hopes to bomb the GroKo plan at the end of coalition talks, expected several weeks from now, when the party's 440,000 rank-and-file members get to have the final word in a vote.

If the young activists, and other internal critics, succeed with their #NoGroKo campaign, this would likely spark snap elections in Europe's biggest economy, and probably the end of the Merkel era.

Backflip
Merkel's troubles started when, 12 years into her reign, September 24 elections left her short of a governing majority and in need of new coalition partners for a fourth term.

The rise of the far-right Alternative for Germany (AfD), driven by public fears over a mass influx of asylum seekers, came at the expense of the mainstream parties which scored historically poor results.

Schulz won plaudits for declaring straight after the vote that he would take the SPD into   opposition to rebuild its fighting spirit after four years of lacklustre compromise politics with Merkel's CDU.

This would also serve to stop the third-placed, anti-immigration AfD from leading the opposition, he said.

But Schulz backflipped on his bold promises when Merkel failed to build a coalition with two smaller parties and, in November, once again courted the SPD, appealing to its sense of responsibility.

To the Young Socialists, or "Jusos", and other critics, a new alliance would be the ultimate sellout, poison for a vibrant democracy, and proof that the ageing party elite is more interested in power and posts than policies.

They warn that it could spark the death knell for the once proud party that stood up to the Nazis and long championed workers' and minority rights, at a time when leftist parties are in retreat across Europe. 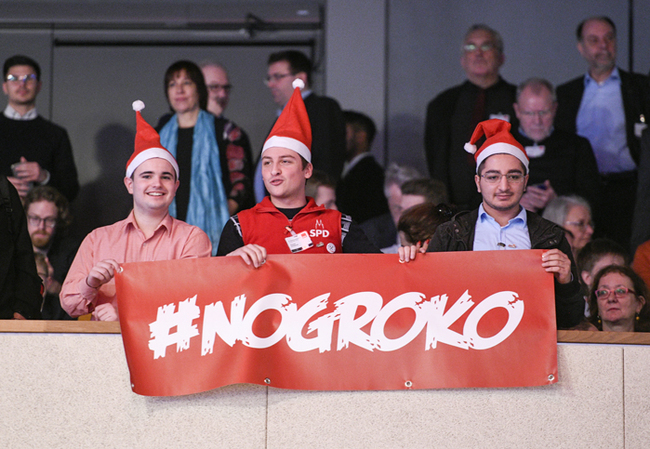 Opponents to a a new grand coalition (GroKo) unfold a banner reading "#NoGroKo" on January 21, 2018 in Bonn, western Germany, at the beginning of the Social Democrats Party's (SPD) extraordinary congress to decide whether to launch formal coalition talks with the Chancellor's conservatives CDU/CSU union. (AFP)

'Nasty trickery'
Kuehnert and friends have vowed an all-out campaign to stop the Merkel pact, controversially urging GroKo foes to join the party just so they can vote against it.

"A tenner to stop GroKo," ran their slogan, referring to the 10 euro ($12) fee for two months' membership, as more than 1,600 people signed up online in the first three days after the congress.

Johannes Kahrs, of the SPD's conservative wing, called the campaign "indecent" and an exercise in "nasty trickery", while senior party figures declared the SPD would soon set a cut-off date after which new members could not vote in the crucial ballot.

"The Jusos' campaign adds a layer of conflict to a party that is as divided as ever," said Michael Broening of the party's think-tank, the Friedrich Ebert Foundation.

"In a referendum that is widely expected to be a close call, the current no-Groko campaign is sure to make an unpredictable vote even more uncertain."

Celtel gets sh525b for network expansion

Another phone company takes off