Kagadi has a shortage of over 460 teachers

Out of 5,108 candidates who sat Primary Leaving Examinations (PLE) last year in Kagadi district, only 213 passed in division 1.

Out of 5,108 candidates who sat Primary Leaving Examinations (PLE) last year in Kagadi district, only 213 passed in division 1.

KAGADI - Kagadi district has of challenge of inadequate teachers, with 468 missing to fill the teaching gaps in the education department.

Bartholomew Bukenya, the Kagadi district education officer, said the district is supposed to have at least 1,600 teachers to ensure teachers concentrate on teaching.

Bukenya said the staff ceiling cannot allow them recruit more teachers to fill the gap because the district does not have the wage bill to cater for the missing teachers.

"We need at least 468 teachers to teach well in government-aided schools. However, this cannot be achieved until the central government lifts the ban on recruitment of more teachers," Bukenya said.

Bukenya cited an example of Muruha Primary School in Mpeefu sub-county, which has only four classroom teachers and one headteacher.

He said out of 5,108 candidates who sat Primary Leaving Examinations (PLE) last year in Kagadi district, only 213  passed in division 1, while 470 failed.

Bukenya called for teamwork in uplifting educational standards in schools. He asked the education ministry to increase the education wage bill and staff ceiling to offset challenges in the education department.

He added that some schools are understaffed yet school enrolment is high. Citing Kagadi Model Primary School, Bukenya said the UPE school has an enrollment of over 1,000 pupils but with only 14 teachers instead of 24 recommended staff.

The Masindi district Woman MP, Jalia Bintu Lukumu, advised Kagadi residents to desist from marrying off their daughters at a tender age, but invest in girl-child education.

"I am a teacher by profession and a trainer. I know the challenges in our education system, but I advise you to use the meagre resources you have to educate your children," she said.

Bintu stressed the need for stringent policies and laws, both at local and national levels in improving educational standards in the districts across the country.

"The Government, through Parliament, is working on the standardisation of remuneration of public servants, especially teachers in order to have better pay and standards of living," she said. 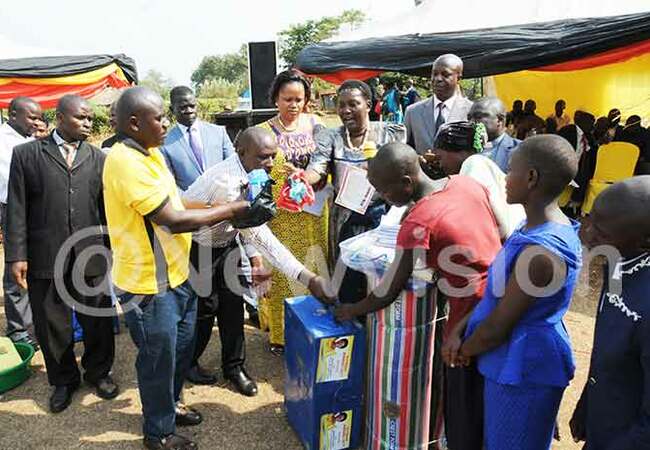 Bintu made the remarks on Monday while officiating at the handover of scholastic materials and certificates of recognition to best performers in the 2017 PLE at Kagadi freedom square in Kagadi district.

Bintu advised parents to provide extra boarding facilities to girls, especially sanitary pads, which have been a challenge to female students during their menstrual periods.

"Lack of pads and knickers is one of the causes of school dropouts and absenteeism. You should buy more than three knickers and sanitary pads to address this challenge,'' she said.

Bintu asked the Kagadi district education department and teachers to emphasise on the teaching of Kiswahili Language in schools as the second official language in the country. She said this will ease communication in offices and business activities in the East African Community countries.

Bintu implored Pupils to strive for higher strides and properly  use the donated scholastic materials in secondary schools where they will be enrolled.

Out of 42 best Pupils, 38 were from Universal primary schools, while only four were from Private schools selected from 18 sub-counties, including two town councils in Kagadi district.

She said the purpose of the offer is to help parents who are unable to afford scholastic materials for their children in secondary education.

Fresh Kyabazinga polls to be held