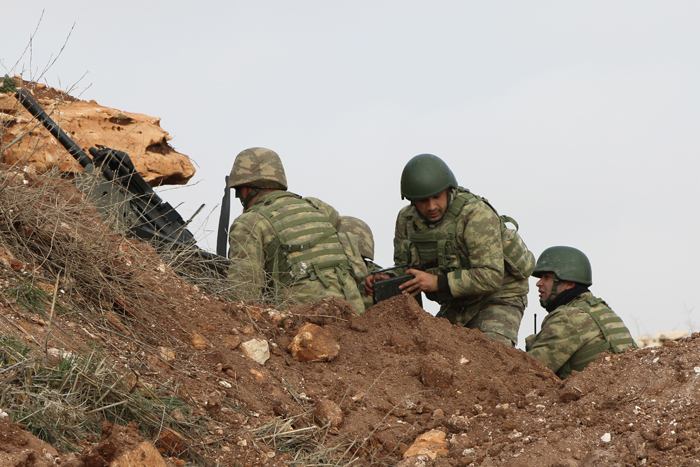 PIC: Turkish soldiers are seen around the area of Mount Bersaya, north of the Syrian town of Azaz near the border with Turkey, on January 22, 2018. (AFP)

SYRIA - Turkey on Monday intensified its offensive against Kurdish militia targets in Syria as President Recep Tayyip Erdogan vowed there would be no stepping back in a campaign that has stoked concern among Ankara's allies and neighbours.

The Turkish military announced the death of its first soldier since the launch of operation "Olive Branch" on Saturday, its second major intervention in Syria's devastating seven-year civil war.

Civilians in the town of Afrin, 18 kilometres (11 miles) from the front line, stocked up on food and medicine as they readied for a potential onslaught. Shelters were prepared and the internet was only functioning sporadically.

Turkey sees the YPG as a terror group and the Syrian offshoot of the Kurdistan Workers' Party (PKK) which has waged a bloody three-decade insurgency against the Turkish state.

"We are determined. Afrin will be sorted out. We will take no step back," Erdogan said in a televised speech in Ankara.

But the operation is hugely sensitive as Washington relied on the YPG to oust Islamic State (IS) jihadists from their Syrian strongholds and the Kurdish militia now holds much of Syria's north.

'A short operation'
Turkish state news agency Anadolu said ground forces had already seized 15 villages and other locations during their advance into Syria.

In Afrin, residents queued at bakeries and cars were on the streets as residents braced themselves for any violence.

"God willing, the war will not last long. We pray for strength and courage for the YPG," Zuheir Hussein, 32, told AFP.

Convenience store owner Ali Sourani said his shop was running low on food and the region was "surrounded".

"We have had our shelters prepared for 10 days to hide during the fighting," he said.

"We have difficulties with the internet which has been down for three days. We cannot communicate with our relatives."

Turkey's military announced its first fatality of the campaign as a soldier was killed in clashes with the YPG southeast of the border town of Gulbaba.

The Britain-based Syrian Observatory for Human Rights has said a total of 22 Syrian civilians have been killed by Turkish strikes and two more by Kurdish fire during the operation.

It said 54 Syrian combatants had been killed, including 19 Ankara-backed rebels, 26 Kurdish fighters and nine unidentified figures.

But Ankara has denied inflicting civilian casualties, with Foreign Minister Mevlut Cavusoglu accusing the YPG of sending out "nonsense propaganda and baseless lies".

Observatory director Rami Abdel Rahim told AFP in Beirut that Monday's clashes were the fiercest since the start of the offensive.

He said Kurdish forces had recaptured a key hill in the region, briefly seized by pro-Turkish Syrian rebels on Monday.

In a sign of the risks to Turkey, rockets fired from Syria on the border town of Reyhanli on Sunday killed a Syrian refugee. One more person was killed in a similar attack Monday on the village of Kirikhan.

The Syrian Democratic Forces, an umbrella group dominated by the YPG, said in a statement that the operation amounted to "clear support" for IS.

Turkey's previous incursion into Syria was the Euphrates Shield campaign in August 2016-March 2017, targeting both the YPG and IS in an area east of Afrin.

Erdogan has warned that those protesting against the operation will pay a "heavy price". Turkish police detained 24 people on suspicion of disseminating "terror propaganda" on social media.

'Russian backing'
As well as a complex military mission, Turkey faces a sensitive diplomatic landscape as it seeks to avoid alienating allies and provoking foes.

Western capitals fear the campaign against the YPG will shift the focus from eliminating IS after a string of successes in recent months.

The UN Security Council discussed Turkey's offensive and the worsening humanitarian crisis in Syria on Monday but did not condemn or demand an end to the Turkish operation.

"The call for restraint, I believe, was widely shared during the discussion," French Ambassador Francois Delattre said after the closed-door talks in New York.

US Secretary of State Rex Tillerson, in London, said he was "concerned" about the offensive, while EU diplomatic chief Federica Mogherini said she would discuss the situation with Turkish officials.

But Erdogan expressed impatience with US demands to set a clear timetable, saying the campaign would be over "when the target is achieved".

"How long have you been in Afghanistan? Is that over in Iraq?" he said, referring to long-running US military presence in those countries.

Erdogan has previously indicated that once control is imposed in Afrin, Turkey wants to head east to defeat the YPG in the town of Manbij.

Meanwhile Russia and Iran -- who have a military presence in Syria and are working with Turkey on a peace process -- have also expressed concern.

Erdogan insisted Turkey had discussed the operation in advance with Russia, and Moscow was in "agreement".

A crucial factor will be whether the operation affects a Syrian peace conference to be held in the Russian resort of Sochi in late January.

Russian Foreign Minister Sergei Lavrov said that Kurdish representatives would be invited, without specifying who, and accused the US of encouraging Syrian Kurdish separatism.