Life after prison: A tale of an ex-convict

GULU - After serving his eight months sentence, James Opoka returned home to start life anew, which he says was not easy.

His first step was to invite his relatives who had dragged him to prison and asked them to be free with him.

His crime
Opoka was condemned to a jail term after selling family land which was supposed to be shared among the members.

The land, which was sold at sh20m, was to be divided amongst the 15 members of family, but one of them claimed he had not got his share, accusing Opoka of having taken his part of the money.

Opoka was later taken to Police who preferred theft charges on. However, he was given bail for two months to allow the family members resolve the matter outside court.

After the two months, Opoka filed for an extension of his bail in court, but his uncle (the complainant) protested.

On July 25, 2015, the Gulu Magistrate's Court rejected his bail application and instead convicted him for stealing sh20m. He was later remanded in prison for eight months.

Cancelled bail
"My uncle was not happy to see me out of prison. I did not know that one of my uncles had not agree with the family's decision to sell the land."

"Selling the land angered my uncle who had not openly spoken his mind during the discussions to sell the land. He instead dragged me to court and I was sentenced to eight months in prison," Opoka says.

Opoka recalls that life in jail as a living hell. He says he broke down in tears for having been accused of a crime he had not committed.

"I was heartbroken to see my relative sending me to hell, yet I did not take his share."

I wish he had shared his views with the family members rather than placing a jail curse on me," Opoka notes. 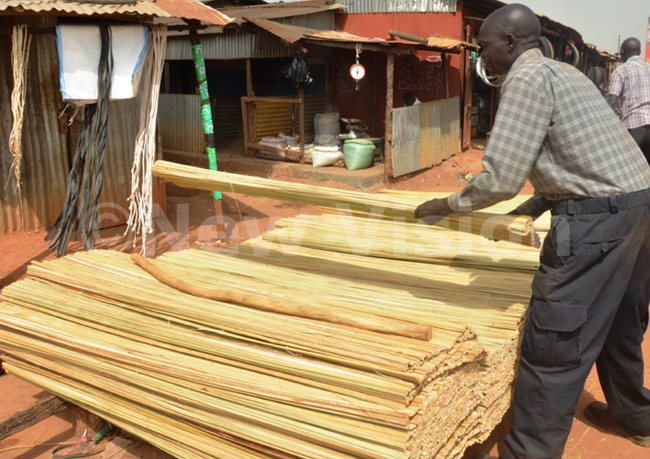 Opoka re-ignited his-business with 57 papyprus mats.Using the business skills he acquired while in prison, the stock has grown

Rehabilitation in prison
The father of three and a resident of Kirombe parish, Layibi division in Gulu municipality, says he never thought he ever forgive his uncle.

Just like other convicts at Pece Prison in Gulu municipality, Opoka was among those that attended reformatory programmes such as entrepreneurship trainings, craft making and farming sessions.

These were under the initiative of Uganda Prison services in partnership with Advance Afrika Uganda, a non-governmental organisation (NGO) that rehabilitates inmates.

"We underwent several trainings on spiritual and emotional control, as well as life skills," Opoka said.

He acknowledged that the country is undergoing several new innovations and incase one is not rehabilitated to be aware of the changes; there is a possibility of committing other crimes.

Opoka, however, said the reformatory programme of inmates in the prisons is not enough, adding that as long as one is alive and in detention, they need daily rehabilitation.

He said when inmates come out, they start a new life and getting started requires a new mind that is development-oriented.

"I want NGOs to equip convicts with more entrepreneurial skills so that they become self-reliant and start own businesses," Opoka added.

Opoka re-ignites his business
At the time of his conviction in July 2015, Opoka was running a business, which he left in the hands of his friends, but had collapsed by the time of his release.

"I had to think of how to revamp my business. So I embarked on doing manual work such as being a porter at construction sites and fetching water for sale," he said.

Fortunately, after hard work, the former convict managed to raise sh85,500, which he used to buy 57 pieces of papyrus mats as his stock.

Operating from his old premises in Layibi Central Market in Layibi division, Opoka started his business in April 2016.

He also used his bicycle repair skills to supplement his earning.

Currently, Opoka's business has grown to sh1.5m, after introducing more items such as second-hand jerrycans, brooms and ropes, fibres for roofing and second-hand bicycles and spare parts.

With more two stores in the town, Opoka was delighted to tell New Vision, that he buys old bicycles at about sh10,000, repairs them and later sell them at a minimum price of sh100,000 each. By the time we visited his store, 15 bicycles were worked on and ready for sale.

Reconciliation
Opoka says it was not easy for him to resettle into the community without making peace with the people who had taken him to jail.

He said people used to discriminate against him when he had just returned back in the community, reason he had to reconcile with them.

"I had to apologise to the people who had accused me of theft so that they can accept me back into the community," Opoka said, adding that many ex-convicts are struggling with the same. 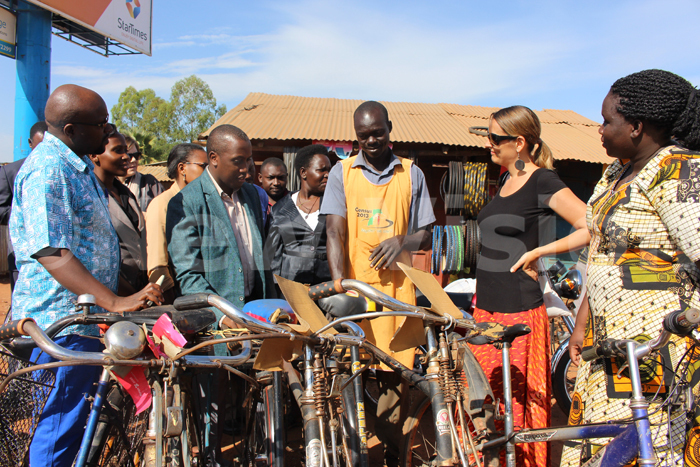 Community's view on rehabilitation of prisoners
Joyce Santa Laker, an activist in Gulu municipality, said prison is a reformatory department for people who have come into conflict with the law.

But Santa said this has not been possible as evidenced by the acts of many of those who have been released.

"The effect of prison is not seen on some of these ex-convicts. They instead come out more notorious than before," she noted.

The activist also observed that crimes are shooting high and most of them are committed by people who have been in prison, thus the need to scale up on the rehabilitation process.

Ben Acellam Ongaya, a cultural leader and advisor to the Acholi Paramount Chief, said there is need for amendment of the laws that relate to judicial process to deter others.

Ongaya said the lighter sentences have made some people become habitual offenders, making prison to become a bed of roses for criminals on top of congestion.

"In the past, culture promoted harmonious living and respect for one's property. This has changed today. The crime rate is escalating despite having many religious organisations in the country," he added.

Young population at risk of crime
Ronald Rwankangi, the country director of Advance Afrika said Uganda has the biggest young population with no meaningful employment, which leads them to commit petty crimes.

"Seventy five percent of the Ugandan population is under the age of 35 and this is the age when someone is active."

"However, this same age bracket that is unemployed have no meaningful source of income as a result they are pushed into committing crime and end up in jail," Rwankangi said.

He said when they started the organisation in 2012, they wanted to change the way young people were looked at in the country by empowering them, especially those who are in and out of prison.

He explained that they partnered with European Union, Caritas Switzerland, AGEH (Civil Peace Service), FK Norway, Uganda Prisons Service, JPC-Lira, the German Embassy in Uganda and the Government of Uganda to ensure the issues that affect prisoners and ex-prisoners are addressed.

According to Rwankangi, they also embarked on various engagements with stakeholders from the legislative and visiting prisoners to establish the services provided for prison inmates, who included; a shift from the punitive retributive culture to a rehabilitative approach; improved conditions of inmates in incarceration and ensuring inmates are prepared for re-entry into the community.

"We have started looking into the reintegration of ex-inmates and the role community members can play in it.

"Through these, we reached out to communities in Lango and West Nile, and put a new thematic focus on conflict transformation as well as the situation of female prison inmates," Rwankangi said. 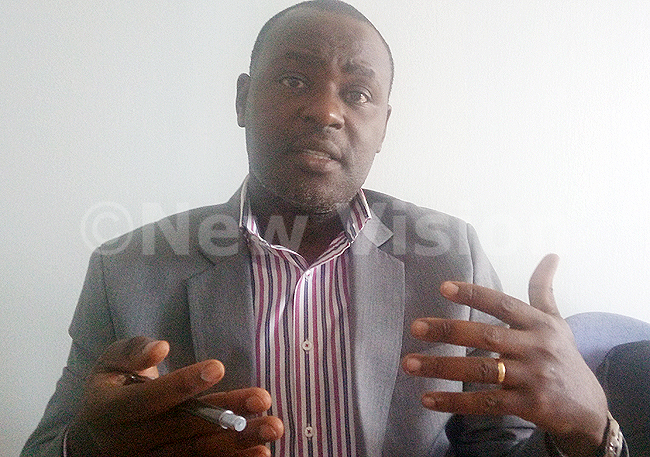 Congestion
Frank Baine, the spokesperson of the Uganda Prisons Service told New Vision that by December 2017, Uganda had 51,0 00 prisoners in the 254 prison units across the country with 97% of these being males.

In regard to decongest the prisons, Baine said last year they submitted a list of 2070 names to the Attorney General for consideration to have them released.

The Attorney General chairs the prerogative of mercy committee, which legally advises the President to exercise his powers and forgive inmates that meet the requirement of being pardoned.

Broken system
Rwankangi insists that the majority of 51,000 inmates are young people and a big number are in prison for petty crimes, which has led to congestion in prisons.
"The traditional system of resolving small conflicts at family and community level has been broken. That is why many end up in prison, causing congestion and delay in attaining justice," Rwankangi added.

He also explained that 50% of these prisoners are on remand, making it difficult for Uganda Prison Services to plan effectively for them.

Rwankangi said to bridge the gap, they have reached out to 696 inmates and 197 ex-inmates  last  year of 2017, trained 52 prison social workers and 54 student facilitators were engaged in the review of business plans to help ex-mates cope after prison life.

The aftermath
Being in prison can be challenging in any one's life with negative impacts on the family of the person in jail, recalls Solomon Okot, another former inmate.
According to Okot, a former prisoner remains an outcast in society.

"Re-establishing your former and true identity in society without being judged is a struggle. Besides, while in prison, their socio-economic activities are destroyed to the point that nobody is willing to employ a former prisoner, making their lives more miserable," Okot said.

Appeal
Okot appealed to the Government and development partners to come up with programmes to help resettle such people back in their communities so that they do not commit crimes again.

"Many leave prison in a more pathetic state than they went in. Majority come out with a lot of anger and are likely to repeat the same mistakes if not helped to regain their self-esteem and be accepted in the community," Okot added.

Residents who have lived with Opoka say he must have got good training from the prison.

According to Bonney Omara, who has been working with Opoka since he returned from prison, he is a changed person. He says Opoka has learnt how to resolve issues affecting work.

Bernard Kinyera, another resident, says unlike in the past, Opoka's interaction with people has improved.

Ugandans spending 30% less due to COVID-19