PIC: Mwiru being congratulated by his supporters on arrival at Danida playround in Walukuba Masese where he concluded his procession on Friday. (Jackie Nambogga)

JINJA - Jinja town was a no way through as Forum for Democratic Change (FDC) supporters reigned several streets jubilating the ousting of Nathan Igeme Nabeta from Parliament.

The Jinja East legislator was on Friday thrown out of Parliament by the Court of Appeal after a panel of three justices, led by retired deputy Chief Justice, Steven Kavuma announced his victory as falsified.

This was after establishing that results of one of the polling stations were inflated, which in turn affected all results of the constituency.

Nabeta had appealed a decision by Justice Lydia Mugambe of the Jinja High Court, who had overturned his victory, declaring Paul Mwiru of FDC as the legally elected legislator.

Mwiru dragged both Nabeta and the Electoral Commission for falsifying the poll outcome, which favoured Nabeta's way to Parliament.
He argued that results from Danida A-D community polling station in Walukuba/Masese division were inflated, which earned his opponent victory.

Mwiru said the original declaration forms, a copy of which he gave to the Police, indicated that he garnered 226 votes, while Nabeta had scored got 187.

He explained that a forged declaration form indicated that Nabeta had scored 507 votes, while those of Mwiru were maintained at 226. 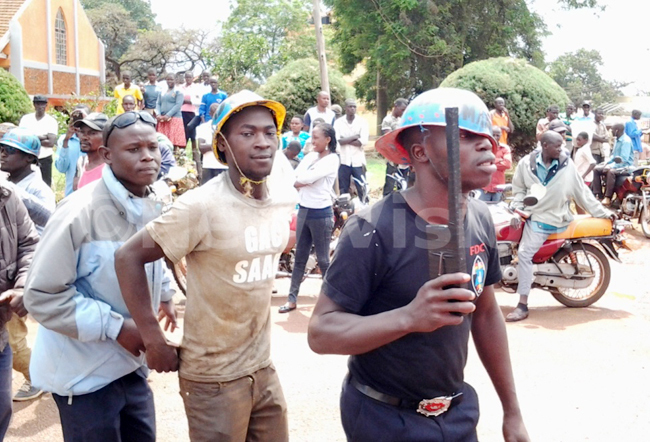 However, the Jinja district returning officer, Ambrose Mwaita declared Nabeta winner with 7,770 votes and that Mwiru had 7,635.

Mwiru insisted that there were alteration of results and vowed to institute criminal investigations against whoever was behind the changing of the results.

Also, he vowed to petition court to overturn the results.
Consequently, Mugambe overturned results in his favour, but Nabeta appealed.

However, the justices concurred with Mugambe, saying Nabeta was wrongly declared winner of the February 2017 polls and ordered for fresh elections.

At about 4:00pm, they were joined by Mwiru, before holding a procession that paralysed traffic flow in town.

They began from Kampala Road before joining the Jinja Main Street up to Kirinya Road, FDC's stronghold.

They turned to Spire Road and Iganga then proceeded to Alidina, before moving upwards Nizam Road, which houses Nabeta's NBS radio station and Kodheyo television and back to Main Street.

They walked up to Walukuba/Masese division, where Mwiru made several stopovers and summed up at Danida playground, where the voting rigging took place.

On descending from the vehicle, dubbed, FDC mamba, which moved him throughout the procession, women struggled to hug Mwiru, while others cleaned his soiled shoes in astonishment. 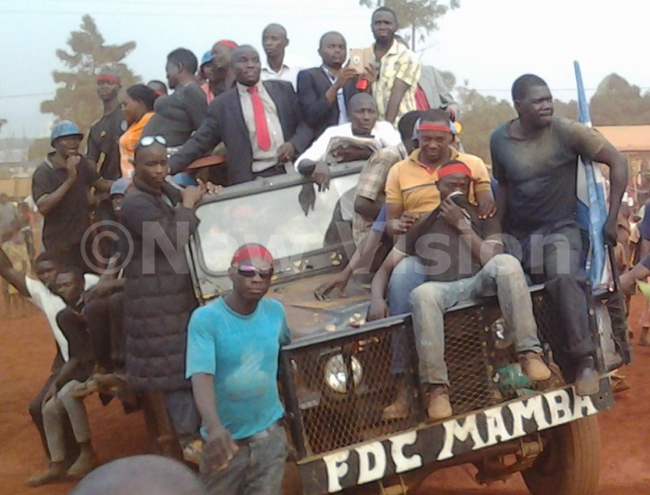 Mwiru (wearing red tie) being driven in the FDC Mamba

Addressing the crowd, Mwiru thanked the residents for having been patient in the pursuit of justice.

"It has been a year since we petitioned court, but I would like to thank each of you for being with me in this struggle," Mwiru told a cheering crowd.

He also thanked the witnesses for not accepting the bribes to withdraw from the case.

"They tried to pursue our witnesses, but they stood their ground, they were not money hungry but were angry for snatching our votes," Mwiru said
During the rally, residents accused Nabeta of supporting the removal of the presidential age limit without consulting them.

Monica Agero, a resident of Soweto, said Nabeta did not held any meeting over the matter in their parish. 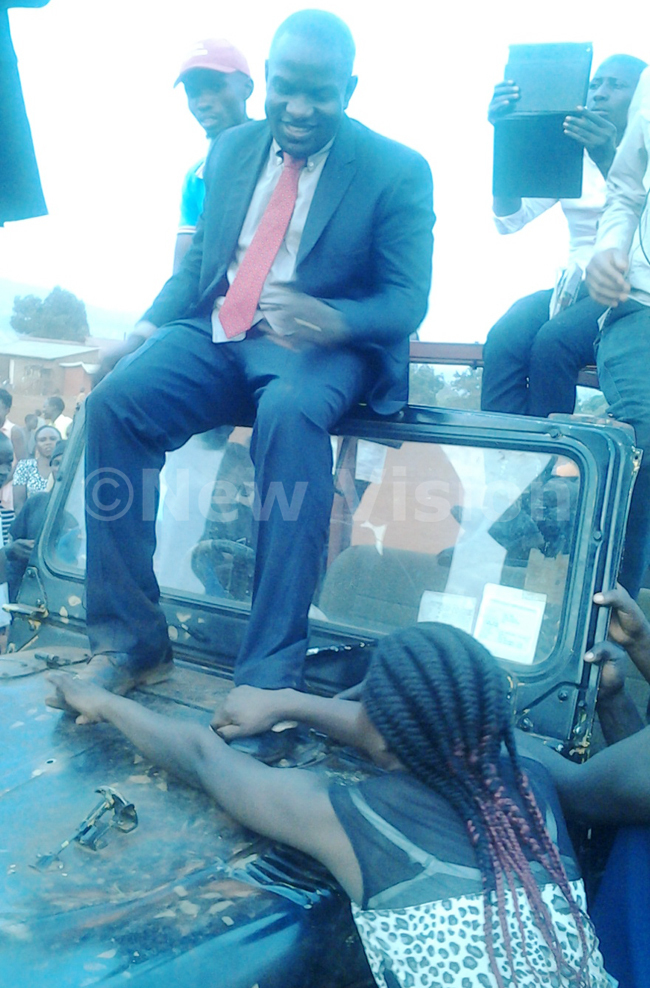 Mwiru looking at a woman as she cleaned his dusty shoes

"Where did Nabeta get the authority of thinking for all of us that we were in support of the revision of Article 102b of the Constitution, he acted against our wish," Agero said.

In response, Mwiru told residents that Nabeta committed treason by not consulting them as residents.

He said whatever the former legislator reported in Parliament were lies which had caused unrest among the people of Jinja East.

"Our own legislator turned against us by telling lies to Parliament that Jinja East agreed to revise article 102b of the Constitution, this was treason," he said.

Mwiru said the nullification gives residents another chance to vote their desired leader during the forthcoming bye-elections by maintaining their voice as per the February 2017 polls.

What Ugandans expect from the budget