UN to investigate DR Congo attack on peace...
Next Story

Godfrey Kasiita in charge of security said: “This time round we are going to man our city. If the politicians risk entering it, we shall manhandle them.”

Godfrey Kasiita in charge of security said: “This time round we are going to man our city. If the politicians risk entering it, we shall manhandle them.”

KAMPALA - The business community in Kampala has warned Opposition politicians not to dare cause any chaos in the city centre.

Parliament, towards the end of last year, passed the Constitutional Amendment Bill No.2 of 2017 (age limit bill), which the President assented into law on Dec, 27, 2017.

During a press conference at Katonga in Kampala, shortly after Parliament passed the amendments, the Opposition called on the public to join a campaign, dubbed defend the constitution.

"On January 9, we shall kick-start a campaign to defend the constitution," Besigye said.

While addressing journalists at Nakivubo Blue Primary School in Kampala Friday, businessesmen vowed to protect their ventures from political activities.

According to Yasin Ssematimba, the chairperson of the Taxi Drivers Kampala, they should be respected.

"We work for this country. Whenever there is chaos in the city, we suffer. Goons ravage our businesses and we are tear-gassed.

"Before the politicians do anything, let them think about us the business community," Ssematimba said.

"The politicians get money from the Government out of our taxes. Therefore, we shall not accept any confusion in the city centre," he said.

The chairperson Kampala Arcades Traders' Association, Patrick Lwanyaga, said: "If our MPs want to demonstrate, they should bring their children so that they can also be hit by stray bullets," he said.

Lwanyaga said Kampala is their source of survival and as a result, they cannot tolerate anybody who violated its peace.

Kayita Sserumaga, the chairperson Kiseka Market, appealed to politicians to have mercy the people with disabilities and children, who are always caught up in the chaos.

"Politicians should hold campaigns in gazette places such as playgrounds and not markets or in the taxi parks where people carry out their businesses," he said.

The general secretary Kampala informal sector association, Adams Kakumba wondered why politicians should defend the Constitution in the city and not in Parliament.

Godfrey Kasiita in charge of security said: "This time round we are going to man our city. If the politicians risk entering it, we shall manhandle them." 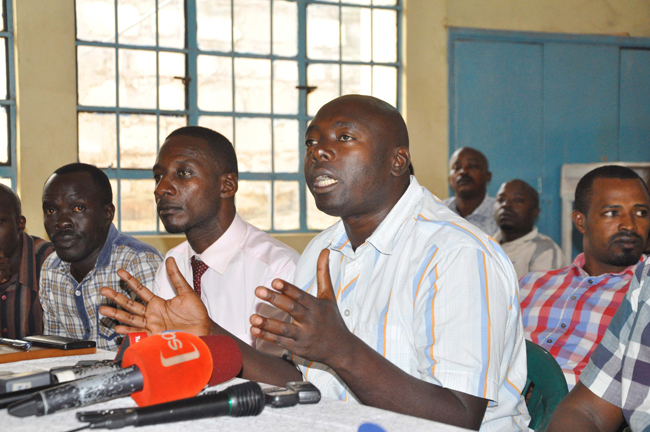 The Opposition Chief Whip in Parliament, Ibrahim Ssemujju Nganda, dismissed the group as not the genuine.

He is reported to have said they are militias who work with Police to beat up people.

"If it was the Kampala City Traders' Association (KACIITA) talking, we would know they are the genuine people."

These people should know that no one has a right to interfere with the rights of others who feel that things are not right. They will also find us prepared for them", Nganda said.


Police ready
The Police spokesperson, Emilian Kayima said: "As police we have the capacity and we are prepared to handle the illegal assemblies."

Kayima said it is not proper for the politicians to target the city business centre for political activities as it risks people's businesses.