MPs rush for guards over age limit
Next Story

Agriculture minister Ssempijja said that people learn through different means, with some learning more through music and entertainment

Agriculture minister Ssempijja said that people learn through different means, with some learning more through music and entertainment

Kasaija said that fighting poverty in homesteads was one of the challenges to the government with over 70% of Ugandans earning their livelihood from agriculture, but still stuck in extreme poverty.

"It is a good strategy to bring artistes on board, we must join hands to see that we end poverty in our homes and ensure each family earns sh20m and above through agriculture," he said. According to the minister, government targets raising people's income levels to sh20m per year for each homestead, but this, he said, can only be achieved if people adopt modern techniques of farming.

"I saw a man with a few trees of coffee at his home where was growing a crops, which are not even well attended to, such a person can never get a reasonable income unless he changes his strategy and go commercial," he said.

Kasaija was speaking to residents of Kalungu and Masaka districts at Lukaya playground where he was guest of honour at a Kadongo Kamu concert organised at an agricultural exhibition event. 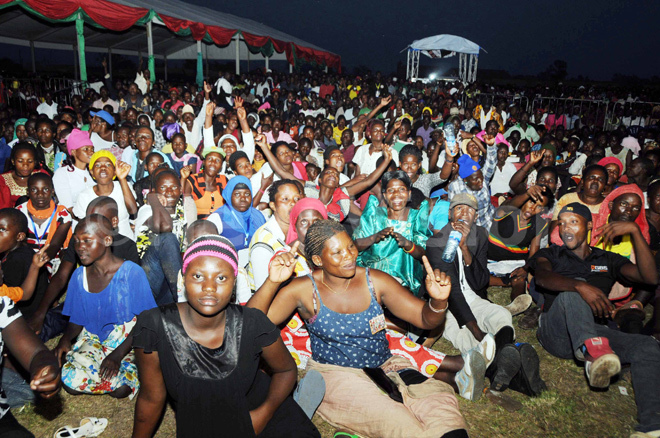 People at the concert

Show goers used the occasion to seek knowledge about new techniques in modern agriculture and how to overcome challenges in livestock crop husbandry.

Experts from the agriculture ministry, animal industry and fisheries as well as agro-dealers and business people put up stalls where they explained, offered advice and answers to queries from the show goers.

"Do not stop at enjoying the music alone, go home and implement what you have learnt from here, we want everyone to become wealthy through improving your methods of growing food and rearing animals because we have favorable weather and rich soils," he said.

Agriculture minister Ssempijja said that people learn through different means, with some learning more through music and entertainment.

"That is why we have copied this model from OWC to use musicians to lure people to such gatherings and use the chance to educate them on agriculture," the minister explained.

He said he worked a programme with the permanent secretary, Michael Wakabi, who attended the show to ensure the programme is taken to other parts of the country. The minister of state for tourism, Kiwanda Ssuubi also attended the concert.

The concert organizer and co-ordinator, Tonny Ssempijja and Andrew Benon Kibuuka, the president of the Federation of Performing Artistes of Uganda offered to organise more artistes to pass over government programmes to their fans.

"We thank Gen. Saleh and other officers in the OWC for realising that musician talent can play role and pass over message about government programmes to their fans," he said.