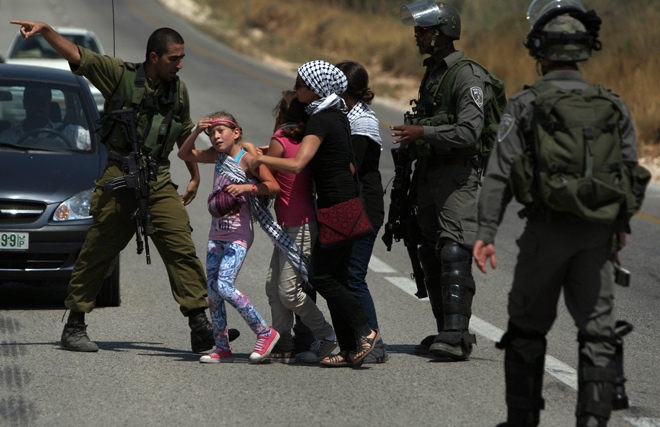 This file photo taken on June 29, 2012 shows Israeli forces preventing Ahed Tamimi (C-L) and her relatives from the village of Nabi Saleh from going into their own property. Tamimi was arrested on December 19, for slapping Israeli soldiers. AFP photo

Two more Palestinian women appeared in an Israeli military court Thursday after a viral video of an alleged assault on Israeli soldiers in the occupied West Bank, an AFP journalist said.

Nariman Tamimi, 43, and Nour Naji Tamimi, 21, were detained in a case that has set Israeli and Palestinian social media alight.

The video filmed in the village of Nabi Saleh in the occupied West Bank shows Nour and her cousin Ahed Tamimi, 17, approaching two Israeli soldiers, before shoving, kicking and slapping them while filming on mobile phones.

The heavily armed soldiers do not respond in the face of what appears to be an attempt to provoke rather than seriously harm them.

They then move backwards after Ahed's mother Nariman becomes involved.

A second video shows the two cousins telling the soldiers, apparently standing on the stairs of the family home, to leave.

The court was expected to decide on the cases of Nariman and Nour later Thursday.

Ahed, the primary instigator in the videos, appeared before a court on Wednesday and her detention was extended until December 25.

She is accused of "assaulting a soldier, harming the security of the area, incitement, and other felonies," according to court documents.

The Tamimi family is at the forefront of regular protests in Nabi Saleh, a frequent scene of demonstrations against Israel's occupation of the West Bank.

The residents say part of the village's land was confiscated by Israeli authorities and given to a nearby Israeli settlement.

The videos of the alleged assault were widely picked up by Israeli media, which often accuse Palestinian protesters of seeking to provoke the army into responses which are then filmed.

Israeli politicians hailed the restraint of the soldiers as evidence of the military's values, but some called for tough responses in the face of seeming embarrassment.

Palestinians on social media criticised Ahed's arrest in the middle of the night, arguing it is the people's right to resist military occupation.

A member of the Tamimi family was shot in the head with a rubber bullet during protests on Friday, the family said.