COSAFA U20: Hippos crush out on penalties
Next Story

Ssangalyambogo revealed her official membership number which is 4928387.

Ssangalyambogo revealed her official membership number which is 4928387.

This was during a VIP tour of the Stadium's Museum and Tour Centre conducted by Manchester United's Museum Business Development Manager, Jason Leach, earlier last week.

Leach said:  "the Princess is welcome to Manchester United family which he described as the biggest family in the world, brought together by the love of their club and football."

Nicknamed "The Red Devils", the club which was founded as Newton Heath LYR Football Club in 1878, changed its name to Manchester United in 1902 and moved to its current stadium, Old Trafford, in 1910.

Princess Ssangalyambogo, who was on a short visit to England, also had an opportunity to watch the Manchester derby, (Manchester United vs Manchester City ) last weekend which ended in a 2-1 in favour of Manchester City.

The three-hour long VIP tour to the Manchester United Museum and Tour Centre which offered Ssangalyambogo an exclusive experience giving her behind the scenes access to areas that the public do not see on standard tours, was organised by the office of Kabaka's Representative in Manchester led by Omukungu Enock Mayanja Kiyaga.

Kiyaga described the visit, though private, and the newly established relationship between the club and Buganda Kindgom as a great opportunity and an honour to Kabaka's subjects in the area and the Kingdom at large.

Princess Katrina who listened with great interest and eagerness throughout the tour, said that in addition to Manchester United's magical, strong history that she was able to learn, she also confirmed that Manchester United is a team with players that have great passion for the game.

"They play exceptionally well and entertain their fans and also they truly appreciate their fans for their support. The bond between teammates on and off the pitch is strong and admirable and that in itself is seen during their beautiful games," she added.

At the end of the tour, Princess Ssangalyambogo and her delegation were treated to English tea in the stadium café and offered lots of souvenirs with Manchester United symbols and logo. 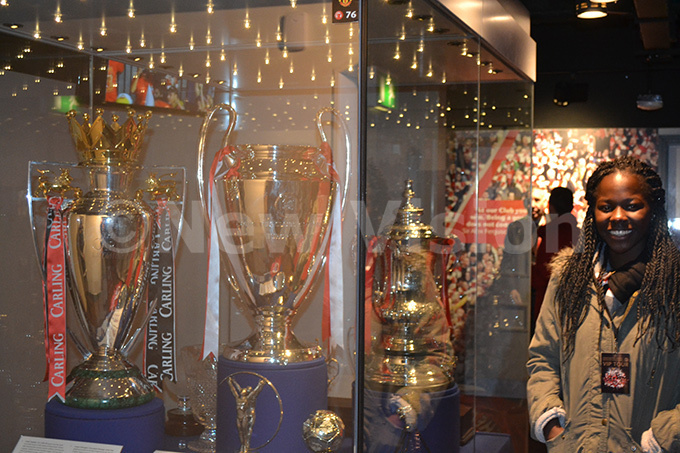 The club management also offered the Princess and the royal delegation with subsidised tickets for the next match between Manchester United and Bournemouth which fortunately ended in 1-0 in favour of United.

After her second experience at Old Trafford, Princess Katrina granted a request for an interview from Manchester United Media in which she shared about her passion for Manchester United since her childhood to the club journalist Filipe Cachada. She revealed her official membership number which is 4928387.

Speaking further about her passion for Manchester United, Ssangalyambo said she's one person who always looks forward to every game day and makes sure that she keeps close a united jersey ready for that day and when the day arrives, she wears it the whole day, no matter the game.

Katrina, who is currently attending High School in Kenya, also spoke highly of her "boarding parents" whom she said are very fond of her and they ensure she's done all her homework before they let her watch a match. "My boarding school in particular has given me the chance to keep track of Manchester United and not miss a game", she added.

On why she specifically chose to support United amongst all other teams, Princess Katrina said Manchester United had built a place in her heart mainly because of the achievements of Managers like, Sir Alex Ferguson whom she truly admires for his 26 years of dedicated service.

"He did such a tremendous job by strongly believing in his team and building it using young stars. Having the passion and believing in young sportsmen is something that touches me as a young sportswoman," she narrated.

Despite being a Princess, Ssangalyambogo is very humble and always tries to ensure that people around her are okay. She acts way above her age and is always eager to learn by asking probing questions continuously to the tour-guide.