PIC: One of the survivors is pulled out of the wreckage by the Police's fire department team (Credit: Emmanuel Balukusa)

One person has died and two others sustained severe injuries in a motor accident at Kitigoma along the Jinja-Kampala highway in Buikwe district yesterday.

According to the Njeru division police commander, Christopher Ruhunde, who spoke to New Vision at the accident scene, the deceased truck driver has been identified as Ezira Kandole, a resident of Ngagaliri village in Bulamajji sub-county in Iganga district.

The survivors are Shafik Walugo of Kasolo village in Bulamajji sub-county and Ronald Kakaire from Iganga. They are admitted at Jinja regional referral hospital with fractured limbs.

"We have not yet known the cause of the accident, but investigations are ongoing. I call upon all the truck and trailer drivers to observe traffic law while driving at night on such busy roads, especially during this festive season," Ruhunde said. 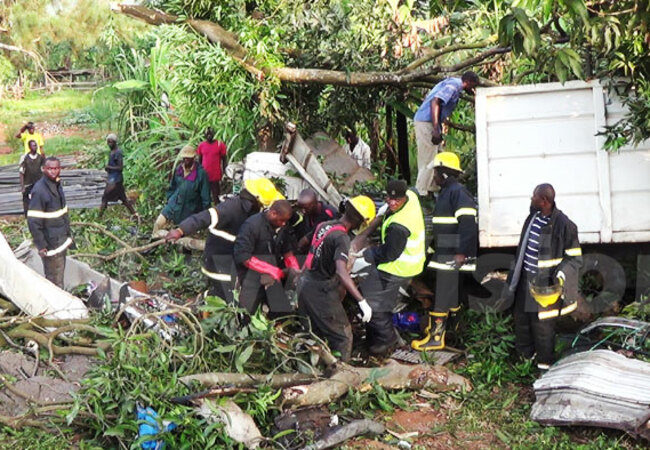 The truck, number UAQ-804T, was coming from Iganga heading to Kampala and loaded with angle bars. After ramming into the mango tree, it overturned several times.

An eye witnesses, Abdul Kasule Lubowa, told the New Vision that most of the drivers who use the Jinja-Kampala highway drive carelessly and overspeed.

He said that the incident happened just ten meters away from the spot were former Toroma county MP Lt. Cyrus Amodoi died and eight others on March 14 this year.

Police from Njeru, together with the residents of Kitigoma, worked to get the victims out of the wreckage.

Fahimah Nansubuga a resident of Kitigoma asked Uganda National Roads Authority to increase on the number of the road signs in sharp corners.