Minister calls for men's involvement in fi...
Next Story

A tale of Kiganda, the last born and only surviving member in Kivumbi’s family of ten people, is completely fused with depression and disappointment over neglect.

Kiganda siting at the door way. Government promised to renovate this house and build a memorial site here in 1982 but nothing has been done Photos /Davis Buyondo

A tale of Kiganda, the last born and only surviving member in Kivumbi’s family of ten people, is completely fused with depression and disappointment over neglect.

As Uganda commemorated World AIDS Day on Friday, Golodian Kiganda, 46, a resident of Kanya-Maganga village in Kyebe sub-county, Kyotera district, was pruning his mixed-crop garden. The day seemed normal, like any other, for him to do his daily chores.

He is the keeper of an earth-brick, and old-roof house, a home of late Golodiyani Kivumbi his father. Kivumbi is considered to be the first HIV/AIDS victim in Uganda.

On a day like this (1st December every year) his home becomes the first stop centre for reference by government and district officials, journalists and various Civil Society Organisations especially on official functions.

A tale of Kiganda, the last born and only surviving member in Kivumbi's family of 10 people, is completely fused with depression and disappointment over neglect.

And this time, he has decried what they called persistent disgrace, abuse and neglect which they have suffered for more than 35 years.

"We have become a spectacle of different organisations, journalists and government officials who have taken advantage of us in one way or another." Kiganda recounts.

In his narration, Kiganda is often invited at AIDS functions in the district and used to promote different programmes on empty promises to support the family.

This practice has created in him an undesirable impression. He considers the family home a tourist attraction without gain and him, an animal to watch in an open zoo.

According to Kiganda, several officials and AIDS NGOs keep visiting him promising to build a memorial site at the late Kivumbi's home, rebuild the house and aid the orphans in all possible ways. But nothing has come to pass over years.

Kivumbi was a prominent fisherman at Kasensero Landing Site and a farmer in Kanya-Maganga village, where he lived, worked and died in April 1982.

This was a time when the Aids epidemic had progressed in Rakai and would claim thousands of people who thought it was witchcraft.

Unfortunately, many more deaths occurred in Kivumbi's family between 1982 and 1989. Three years later, his wife Lovinsa Nanteza passed on.

But Kiganda survived the scourge as young as 10year-old. At this tender age, he was left with the burden of taking care of his nieces and nephews (orphans).

Some other family members could come in occasionally. He was then forced to drop out of school to take care of the young orphans.

State In Which Kivumbi and Wife Died

Kivumbi didn't tell how he contracted the virus but fellow fishermen suspected he acquired it from one of the Tanzania prostitutes at Kasensero landing site. Like other fishermen, he would spend several days away from home.

According to Kiganda, Kivumbi got a strange disease (HIV/AIDS) which made him weak. He couldn't do any work since he was bed ridden most of the time.

"He lost appetite and gradually lost weight. He became pale with red lips and lost almost every hair on his head. Ignorantly, we (family members) called it witchcraft." Kiganda described.
Information from some elders in the area indicates they spent a lot time and money trying different witchdoctors in attempt to find a solution for Kivumbi's complicated health situation.

His wife Nanteza decided to take him to Kyebe Health centre III for checkup. He was then referred to other health centres and clinics in Kakuuto, but his condition worsened. He was later admitted at Mugana Health Centre in Tanzania where he died after a few days.

His body was brought back and laid to rest at Kanya-Maganga village. However, Nanteza also passed on in 1988. She had acquired the virus from Kivumbi. Her five sons and two daughters also died years later.
In his explanation, Kiganda says his brothers and sisters acquired the virus due to lack of information concerning HIV/AIDS and safety measures and tolls to protect them from acquiring it.

People Shun Family
Remember, majority of unwitting residents had likened the disease to a deadly spell or witchcraft. Indeed they had reason to fear Kivumbi's home that lost seven children, a father and mother in a few years. As well, they did not have the cure for this strange disease.

"I don't blame them because I would have done the same back then." Kiganda says, adding that it was God's grace to be the only survivor in the family and living HIV/AIDS free to date. 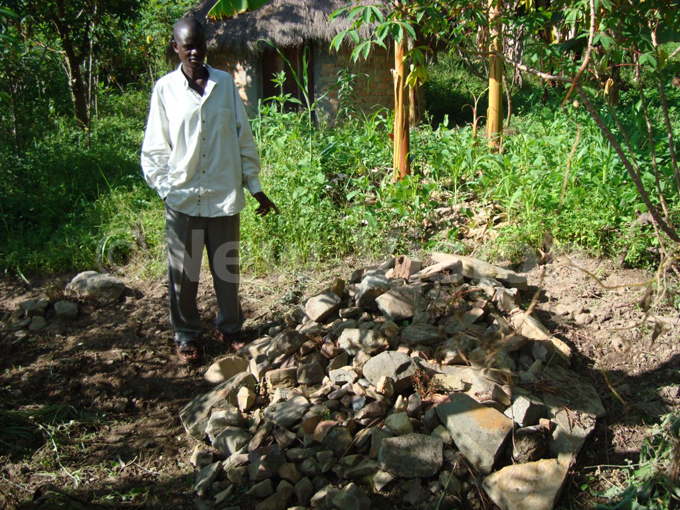 At the first look at the house, you can easily tell the family is over cramped with sheer poverty. The very old earth-bricks house and rusted iron sheets. Also his 5 children and 8 orphans wear old togs.

Also, Kivumbi's grave has also remained in the same state since 1982.

At 41 years, Kiganda has not built his own house. He stays in his
father's four-bedroom-house with his wife Teddy Namulia, their children and other dependants.

"At least government should consider us and take care of the orphans because some of them have already dropped out of school," he appealed.

Charles Njuba (Kyebe Sub-county Councillor), says there was a proposal by Orphans Community Based Organisation (OCBO) to build a monument at Golodian Kivumbi's grave and to also build a new house for the family.

He adds that the proposal was to be presented to government, but the process stalled. He appealed to government through the Ministry of Health to intervene and assist the family.

Moses Serunjoji (Kyebe sub-county chairperson), says helping Kivumbi family may not be a priority for government, but it's a concern from all area residents. He adds that the family is known all over the district, but the orphans are living poor.

"A monument would be better since the family can collect some revenue from those who visit the home," he advised.

John Kalungi Ggayi (OCBO CEO) says the proposal to build a monument has resurfaced several times during preparation for the commemoration of WAD( World AIDS Day) in the district.

He says the proposal to support this family was handed over to the office of the district several years ago, but did not yield fruits.

Anthony Kasigwa (Fisherman) - "We have seen President Yoweri Museveni dishing out millions of shillings to people like Kiprotich, earthquake victims in Tanzania and others. It's high time he considered this family as well," Kasigwa said.

However, medical experts have advanced in the HIV/AIDS research and treatment, a move that has continually given hope to millions of patients worldwide.

The current Anti-retroviral treatment is more advanced that it would be too hard for someone to identify an HIV/AIDS patient compared to its inception in 1980s.

On 30th November 2017, the Ministry of health released a report indicating a reduction in HIV infections in Rakai district from 90% to 42% in a period of seven years.

Rakai was once known for its high AIDS-related deaths that struck fear in different communities and across the country.

With the ongoing Presidential Fast Track Initiative for Ending HIV/AIDS, Museveni believes the disease will not be a threat in Uganda by 2030.