Is Uganda failing on sciences in schools?
Next Story

“I was contracted to work as their electrical engineer for two years and when my contract ended in 2015, I decided to quit, much as my bosses were willing to renew my contract,” says Wakozi.

“I was contracted to work as their electrical engineer for two years and when my contract ended in 2015, I decided to quit, much as my bosses were willing to renew my contract,” says Wakozi.

As the number of youths searching for office jobs increases by the day, Tony Wakozi thinks otherwise.He believes such youths could earn more if they focus on hands on work than sitting in office to work and earn pea nuts.
The former student of Nkumba University graduated with a bachelor's Degree in electrical engineering and got hired by Samadura a Construction Company in Karamoja.

"I was contracted to work as their electrical engineer for two years and when my contract ended in 2015, I decided to quit, much as my bosses were willing to renew my contract," says Wakozi.

Since he had passion for art, he decided to join his aunt in Nasana a kampala surburb and together they joined hands and started making art pieces out of different things.

"My aunt is an art teacher in Nyange secondary school in Mukono distirct so when I introduced the idea to her, she was happy and she offered me a place in her home to work as my workshop," explains Wakozi.

He had ideas but to develop them better, he had to chat with artists so that they would enlighten him more on how to develop his ideas best and come up with good art pieces. 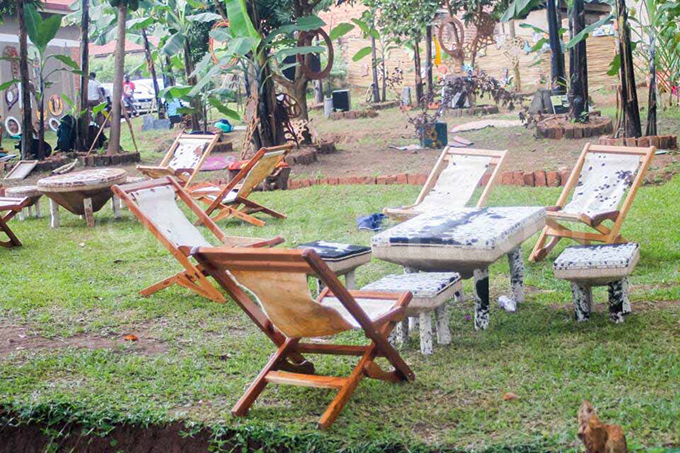 "I took time and walked around Nasana to see how different people make their art pieces. This helped me develop my ideas better and when I started, I made better art pieces which looked unique hence pulling more clients at my workshop," he explains.

He adds that when he made his first art piece out of boxes that he had bought from Kikubo in Kampala, he designed it with animal print features and this, impressed his clients. "My first piece was bought at sh 50,000 and this showed me that quitting my job was the best decision that I have ever made in life, "he says. Till today he still makes art pieces out of animal skin, boxes and African print fabric (Kitenge).

How he does it
"I go to Kikubo and source for materials like boxes, animal skins, African fabric, nails, wall clocks, paint and glue among others,"Wakozi explains.

"After sourcing for materials, I transport them to my workshop and then I sit down and sketch what I want to make before I embark on making it," he notes.

"The sketch helps me understand what exactly I should make to meet the interests of my client. After I cut the materials into preferred pieces and sizes then I join them together with glue to achieve what I exactly intend to make," he says.

"After I paint my piece, then put it under the sun to allow it to dry before I display it for clients to view and buy. In a day I can make upto 7 pieces,"he adds.

Challenges
"Prices of materials are never stable which affects the price at which I sell my art piece. However this business has changed my financial status and the way I look at things," says Wakozi.

He says that way back he thought that office jobs were paying but money belong to the hands of the bosses but workers really earn pea nuts. Now that he is self-employed, he earns more than he used to when he was being employed