Govt to crack down on practice of graduating children

"This practice abuses the gown, which is used by people who have achieved a reasonable academic level."

"This practice abuses the gown, which is used by people who have achieved a reasonable academic level."

PIC: Human rights chief Dr.Livingstone Ssewanyana (left)hands a certificate to one of the graduating children of Classic Primary School in Wakiso district on Saturday. Looking on (right and second-right) are the directors of the school George Patrick Kasajja and his wife Edith Kateme Kasajja

The education ministry is considering scrapping the practice of graduating children in top class (nursery) who are joining primary school.

This was revealed by the commissioner for special needs in the ministry of education Sarah Ayesiga.

Ayesiga was one of the invited guests at the top class children graduation at Wakiso Classic Primary School in Wakiso district on Saturday.

"As a ministry, we are considering stopping this practice because it abuses the gown, which is used by people who have achieved a reasonable academic level, for example, a degree," she said.

She said children should be taught that to wear a gown is an honour, so they have to work hard for it.

Ayesiga further pointed out that the practice was not approved by the education ministry and is only being used by schools to attract numbers.

The executive director of the foundation for Human Rights Initiative, Dr Livingstone Ssewanyana, officiated the graduation of over 40 top class children at the school.

In agreement with Ayesiga, Ssewanyana said schools and parents should respect academic gabs. 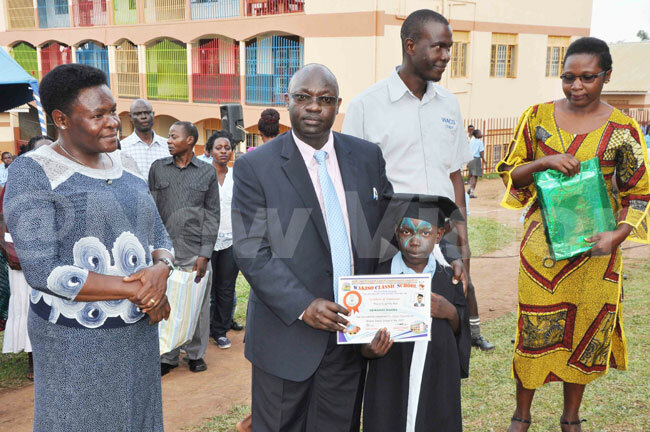 "I think it is important to recognise children who have completed the nursery section, but it does not call for dressing them in full gowns. Just award them with certificates," he said.

Ssewanyana appealed to parents in the country to educate their children, saying  it is the only way to fight the increasing poverty in the country.

He said the country needs experts in different fields and is tired of people with fake academic papers holding responsible offices.

As a human rights activist, Ssewanyana asked Ugandans to stop battering women and children in their homes and advised them to always look for amicable ways of dealing with disagreements.

He pointed out that such children should be allowed to exploit their talents.

Champions League to be completed on August 23

Kizito Luwaga is determined to succeed as a professional