Around Uganda: Pope Francis writes to Mity...
Next Story

The envoy said China was keen to work with other countries, including Uganda, to build an open, inclusive, clean and beautiful world

The envoy said China was keen to work with other countries, including Uganda, to build an open, inclusive, clean and beautiful world

(From left) the head of political affairs at the Chinese embassy Fang  Yi, Paul Kato, the guild president of Makerere University, Xin Li and Wang Shiyi, the secretary to the Ambassador of China with students after the public lecture at Makerere University on November 22. Photos by Ramadhan Abbey

Ugandan youth should work hard to exploit their potential for the benefit of the country, the deputy head of mission at the Chinese embassy in Uganda, Chu Maoming has advised.

Maoming was speaking at a public lecture held at Makerere University on Wednesday, attended by students and scholars from the institution and beyond.

The public lecture, held under the theme: How can Uganda benefit from the new era of China, was organised by the Makerere Students' Guild and the Chinese Embassy to discuss the outcome of last month's 19th congress of the ruling Communist Party of China (CPC).

At the congress, held every five years to assess the party's work and elect its echelon, China's President, Xi Jinping pledged to expand opportunities for young people to excel in different fields. 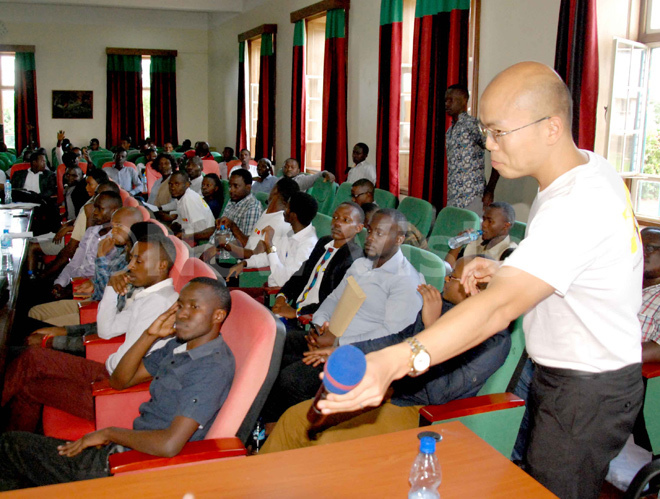 Tapping into the resolve, Maoming encouraged young people in Uganda to seize opportunities that come their way to improve themselves.

"You are the hope of Uganda and the future of the world. You will take the work of your forefathers and make Uganda and the relationship between China and Uganda much closer," Maoming stated.

The envoy said China was keen to work with other countries, including Uganda, to build an open, inclusive, clean and beautiful world that enjoys lasting peace, universal security and common prosperity.

"We see Chinese doing many projects. As young people, it is good to know more about China and the opportunities that come our way, including in academics," he said.

Fang Yi, the head of political affairs at the Chinese embassy encouraged the students to develop keen interest in global affairs and embrace ideas for personal and national development.

Health investment opportunities in the oil and the gas sector