"We want to go back home, even tomorrow, even now at night. I'm very happy," Nikiwe Khumalo, 60, said.

"We want to go back home, even tomorrow, even now at night. I'm very happy," Nikiwe Khumalo, 60, said.

PIC: A Zimbabwean national burns a shirt of the Zimbabwe's ruling party, ZANU PF, as hundreds of Zimbabweans living in South Africa celebrate the resignation of Robert Mugabe. (AFP)

Hundreds of Zimbabweans who fled their homeland for South Africa during the despotic rule of Robert Mugabe took to the streets of Johannesburg to celebrate the resignation of the hated president.

Blowing vuvuzelas, waving Zimbabwean flags and stamping their feet, Zimbabweans danced their way through Hillbrow, a cosmopolitan Johannesburg neighbourhood with a strong community of African immigrants.

"We want to go back home, even tomorrow, even now at night. I'm very happy," Nikiwe Khumalo, 60, told AFP, 36 years after leaving Zimbabwe "to find food" in neighbouring South Africa.

In the years that followed his coming to power in 1980, Mugabe set his country -- once known as southern Africa's bread basket -- on a course of economic disaster, and agricultural production plummeted in the wake of farm reforms. 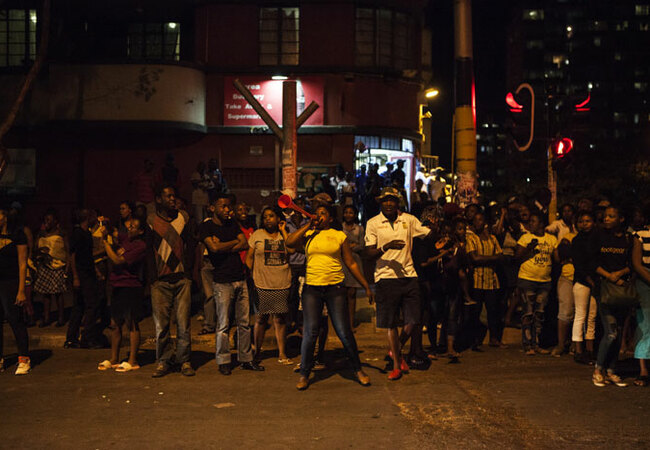 Hundreds of thousands of Zimbabweans emigrated to neighbouring South Africa to escape the misery.

After his resignation Tuesday brought a sudden end to Mugabe's 37-year reign of often brutal rule, families of protesters in Johannesburg waved placards reading "Happy people. Happy Zimbabwe" and "We are free".

"We are going back to built a better Zimbabwe... to work again and open businesses," said another Zimbabwean, who gave his name only as Ruben.

For Cleopatra, 16, whose parents moved to South Africa before she was born, Mugabe's shock exit offered a chance to finally get to know her homeland.

"I want to go back to my homeland. I've never been," she said.

Kenyan press up in arms over 'draconian' media bill