Akena died last year, shortly after a shooting incident in Lugogo, Kampala. Mathew Kanyamunyu, the prime suspect in the shooting is out of jail on bail

Akena died last year, shortly after a shooting incident in Lugogo, Kampala. Mathew Kanyamunyu, the prime suspect in the shooting is out of jail on bail

Family members of the late Akena prepare to lay a wreath on his grave. This was during the first Kenneth Akena Watmon memorial service on Saturday at the family home in Kitgum

A foundation in memory of the slain child rights activist, Kenneth Akena Watmon, has been launched to support vulnerable children.

Akena Foundation was launched during the first memorial service for Akena at the late family's home in Gang-dyang, a Kitgum town suburb on Saturday.

Jordan Ocakacon, an elder brother to the late, said the idea to start the foundation was conceived from their painful loss and the need to preserve Akena's memory and legacy. 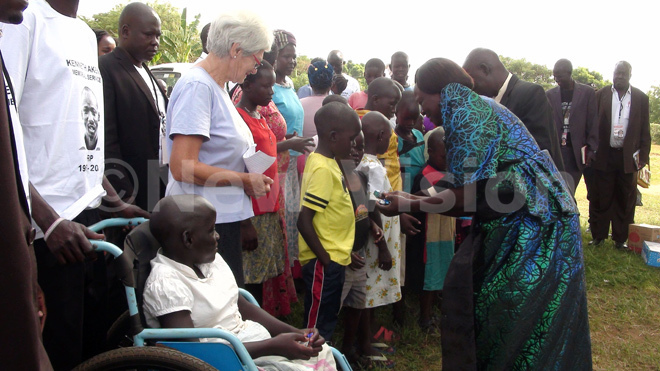 Parents of the late Akena with children at Tender Trust, an orphanage in Pager division, Kitgum municipality

"This foundation is focused on fighting for justice and supporting vulnerable children access social justice and other services that will help better their lives," Ocakacon said.

He said the foundation would target mostly children orphaned due to gun-related incidences.

"First priority will be given to children who are made orphans in gun-related violence," he said.

Ocakacon added that the foundation has already initiated a number of activities, one of which is supporting children access education.

He said they are already paying school fees for three children at Uganda Martyrs Centenary Primary School in Kitgum.

Akena died last year, shortly after a shooting incident in Lugogo, Kampala. Mathew Kanyamunyu, the prime suspect in the shooting is out of jail on bail.

Kitgum municipality Member of Parliament, Beatrice Anywar, who was chief guest at the memorial event, urged friends, family and relatives of Akena as well as well-wishers to support the foundation by making contributions.

Anywar called on Ugandans, especially leaders to practice tolerance of one another's views even if they do not agree with.

She said Akena's death was as a result of intolerance and pride, traits she said needed to be fought if Uganda is live in peace, harmony and unity.

Over sh10m in cash and pledges was raised to kick-start Akena Foundation. Ocakacon said they have also designed membership contribution cards to raise funds for the Foundation from individuals and organisations.

Italian priest granted wish to be buried in Kitgum

Italian priest granted wish to be buried in Kitgum