I fear infecting my baby through breastfee...
Next Story

The South Korea Embassy on Friday awarded the best preforming communities under the Bulungibwansi programme.

The South Korea Embassy on Friday awarded the best preforming communities under the Bulungibwansi programme.

The Vice-President Edward Ssekandi has called for review of the Government development model to empower local communities to play a lead role in planning and implementation of development activities at community level.

He says this will involve the local communities in the development plans which they will own and implement more efficiently than when programmes are planned and implemented from the local or central Government units.

The Vice-President was on Friday speaking at the South Korea Embassy in Kampala at a function during which best preforming communities that took part in the competition in community development programmes Bulungibwansi, were recognised.

Ssekandi said that using the Bulungibwansi, or village movement based on Self-help, diligence and sacrifice, South Korea transformed itself from one of the world's poorest to the top 15 economies in 30 years, saying it's an experience that Uganda can learn from in its bid to a middle-income society. 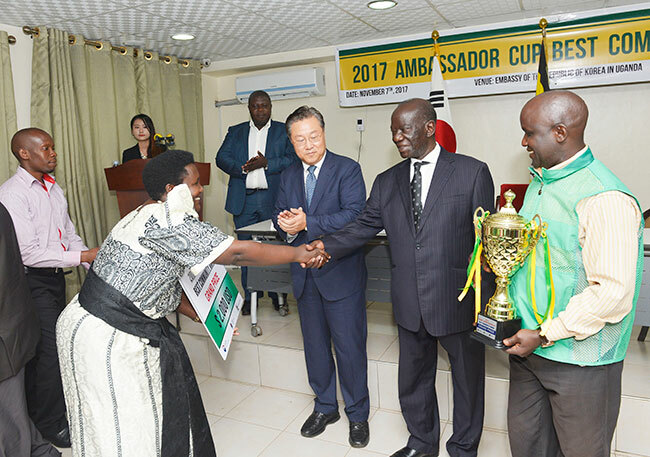 He said that by independence, Uganda occupied a better economic rating than Korea saying the departure from the country's socio- economic norms like Bulungibwansi that connected people for a common cause and facilitated community social responsibility and welfare at the village level need to be revisited.

Ssekandi commended the Government of South Korea for its support to Uganda that has enabled the establishment of the National Farmers' Leadership Centre at Kampiringisa, a technical school at Ntinda and the ongoing establishment of Soroti fruit factory.

Park said that, empowerment of leadership at the grass-root levels will be so crucial in changing the mindset of the community to focus more on their own capacity and potential to develop themselves and their areas than relying only on external support.

Lwamayonza in Bukomansimbi emerged the winner of a competition that involved 100 communities from across the country followed by Kamuzinda in Masaka, while Kabule in Mityana, Kitanga in Kibale and Nyenga in Jinja followed in that order.

This is the third time the competition is organised in Uganda benchmarking the participating villages on co-operation, diligence of leaders, mindset change and physical changes in the participating communities.