Doctors' strike was sparked off by age lim...
Next Story

How a sack garden can save you

A sack garden in the background. Such gardens are useful in urban settings where space is limited and demand for food is high. Photos by Herbert Musoke

One of the urban farming technics that caught the attention of farmers at the Harvest Money farm tour at Kampala Capital City Authority (KCCA) in Kyanja, Nakawa division was sack gardening.

While people living in urban areas would like to grow their own vegetables, they are limited by space. Those who own homes do not have the needed skills.

As people become more conscious of their health, in line with calls for more consumption of vegetables, many are now struggling to find space. This is why a sack garden or food tower comes in handy.

According to Yvonne Nankinga, an agro-chemist and a trainer at Tusimbudde Backyard Farming Group in Kyambogo, Kampala, a sack garden can be one's saviour.

"A sack garden is loosely defined as a garden created out of a perforated sack and they are placed in an upward direction," Nankinga says.

Such a garden will give one space to plant various vegetables in one place other than on land which is not readily available in many urban setting.

Since the vegetables are replacing flowers, they should be well tendered so that they equally make the compound look attractive and beautiful." 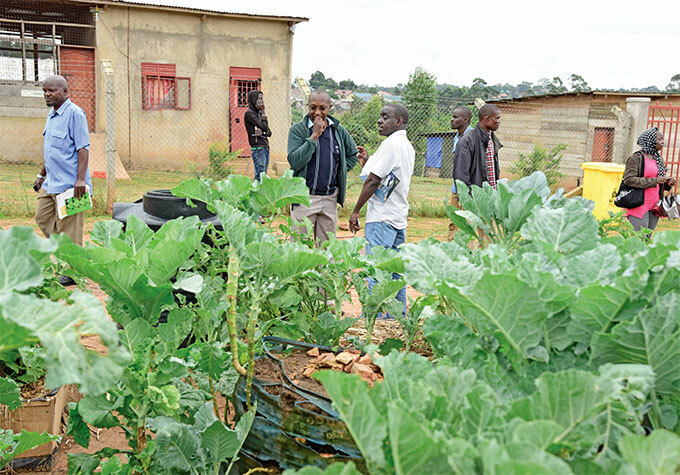 How to make a sack garden Sack gardens are made from perforated polythene or ordinary sacks sold in hardware stores.

Other items include small stones, which should be placed in the middle of the sack, sand, black soil and chicken litter on top to boost fertility.

Cost of the materials

The sacks are readily available and cheap. A new sack may cost between sh1,000 and not more than sh5,000. Some stores too have used sacks which may cost sh500 and below. The amount of hard core stones vary, depending on the number of sacks one wants to erect.

How to apply organic manure

Nankinga advises that one should apply around the plant estimating the rooting zone of each plant.

Other farmers are confused about the height of raising the bed from the ground. Nankinga clarifies that it all depends on the type of your crop. "An example is the tomatoes and the onions. Tomatoes are deep rooters, while onions are shallow rooters. So, the root orientation matters a lot," she confirms.

Where do I market my crops?

When all is done and crops are ready to market, they can hardly trace buyers, since most of these are city backyard gardens.

Nankinga advises that the farmer should "consider making small stalls outside their homes where potential customers can see.

Alternatively, they can sell to the local stalls who will sell to the final consumers," she adds.

The commonest crops that grow well in sack gardens are leafy vegetables, onions or green pepper.

It is recommended that by the nature of their growing pattern, crops with bulbs and berries should be considered since they have small vegetative growth.

"People should avoid planting tomatoes in sack gardens because they are heavy and need a lot of nutrients and water," Yvonne Nankinga, an agro-chemist and trainer at Tusimbudde Backyard

Most of the items used are cheap and user friendly.

"The sack itself is cheap and all the other items needed are readily available," Nankinga explains.

When it comes to maintenance, with this garden, even children can maintain it. She says it does not attract a lot of weed, which calls for hectic weeding and watering in dry seasons is easy.

However, the sack garden does not hold water since it is raised from the ground. "This will call for a lot of watering lest the crops dry," Nankinga says.

She also notes that this arrangement of a sack garden will limit downward growth of the plan.

A dining set versus available space

Protect your sofas from messy kids and pets

WHO awards Uganda for tobacco law

Add fertility to your backyard garden

WHO awards Uganda for tobacco law

Add fertility to your backyard garden