Airtel renews Cranes sponsorship to the tune of sh10bn

The Federation of Uganda Football Association (FUFA) will for the next four years organise several football activities in the country without much hustle after Airtel renewed their Cranes sponsorship with a sh10bn offer.

FUFA will receive sh2.5bn cash from Airtel every year for four years which will be used to fund activities of the national teams, the FUFA Junior League, the Uganda Cranes regional tours, Airtel FUFA Awards, with the biggest chunk of the money going towards the Cranes.

The break down to each of these entities was not availed as the sponsors only offer the cash to FUFA which then allocates accordingly, according to Airtel's Brand and Communications Manager Remmy Kisakye. Federation spokesman Ahmed Hussein said the different allocations will be made later.

Airtel Managing Director V.G Somasekhar signed the renewed sponsorship with FUFA president Moses Magogo in the presence of State Sports Minister Charles Bakkabulindi at Serena Hotel, which sees an increment of sh6bn up from the sh4b that was unveiled in the first four-year deal in 2013.

Somasekhar said it was a privilege, honour and pleasure to be part of the Cranes and that despite Uganda having 56 tribes there was only one that unites them all-the Cranes the reason for the sponsorship to make the sport better.

"The Cranes have got four more years to rewrite history and from our side we want to ensure that we will walk together to ensure we make a consistent and meaningful investment which is not measured by wins or losses," Somasekhar said. 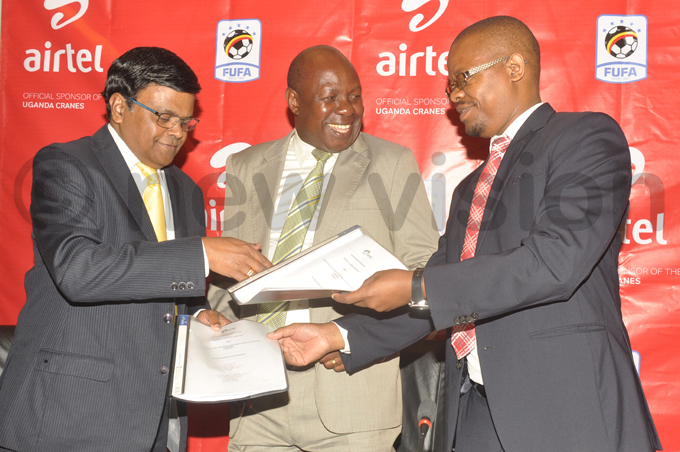 "In the next four years we want to make stronger commitment to ensure we able to develop football in this country to give an opportunity to many players to develop their talent and bring passion to the sport and pride to the country,"

He said in the next four years he would like to see majority of the Cranes players playing on the big stage and that they were ready to support and encourage all the players to continue practicing more.

"Today our hearts are bigger, our bond stronger, our tradition older and our weaknesses are fewer and there is a hand of God to see that the same people that witnessed the first signing are the ones here today," Somasekhar stated before thanking the Ministry of Education and Sports and FUFA for being commendable partners.

An excited FUFA president Moses Magogo said that Airtel actually offer much more in kind than the cash that was announced in the contract.

"This sponsorship is not only the biggest in the country but because you are associating with a brand that is thinking long term and the future," Magogo said, citing Farouk Miya's rise from the Airtel Rising Stars to scoring the goal that qualified the Cranes to the AFCON after 38 years.

"As FUFA and the players a lot of history has happened in the four years and we believe with more funding we can achieve more. We have hit the highest FIFA ranking ever for the country, as 14th in Africa and 62nd in the world in these four years," Magogo stated.

Minister Bakkabulindi commended Airtel for their continued sponsorship but asked them to drum up their sponsorship more so that it is clearly understood by the fans. He also asked FUFA to continue accounting for all the monies that they receive.

He said the Cranes had made the country proud and thanked Airtel for choosing the right sport that unites the country and commended FUFA and Cranes for the discipline and hard work.

"The qualities you have displayed over the years is the reason Airtel has continued with the sponsorship and I encourage you to continue with the same as we aim for more as a team," Bakkabulindi said before calling on other sponsors to come on board in order for the team to scale even greater heights.