He is now headed to the Tanzania Open next weekend

Ronald Rugumayo tees off during the Entebbe Open. Photo by Michael Nsubuga

He is now headed to the Tanzania Open next weekend

As he collected his Entebbe Open championship prizes, Ronald Rugumayo wore a jumper with "Keep Calm I'm a Ninja" words inscribed in-front of it.

And he seems to be turning into one "Ninja" in the game of golf in the country and recapping one of his best years in golf after he won the Castle Lite Entebbe Open on Saturday. 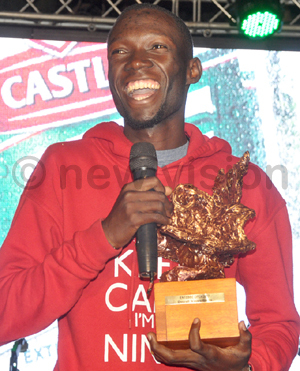 Rugumayo smiles as he gives a speech after the tournament at Entebbe Club. Photo by Michael Nsubuga

The 25 year old, Toro Club golfer and national team vice-captain returned 150 gross over 36 holes to once again emerge the best at the Castle Lite Entebbe Open.

He is now headed to the Tanzania Open, next weekend where he hopes to challenge the likes of Tanzania national team captain Victor Joseph, Seif Mcharo and Saidi Amani.

But despite coming top of the two-day event at Entebbe Club, Rugumayo who is eyeing turning pro, having won the Uganda Open and most recently the Kinyara Open was not happy with his score.

"Yes I have won, but such scores cannot take me anywhere on the big stage where I want to go, so I'm not happy. Any other player would be excited to win this tournament with such a score but for me that showed a lack of consistence," Rugumayo who shot a closing round nine-over-par 80 noted.

"I missed all the fairways in the second round because I wanted to attack and even do better, but I ended up in the trees throughout; and when things did not work, I stuck to the same strategy," Rugumayo who scored 15 pars, 2 birdies and a bogey on hole no. 17 on day one, said.

Palm Valley's Abraham Ainamani who was second best for the second year running, and was 2 strokes off blamed it on luck. "I think I'm just unlucky. Last year I lost by one stroke, this year by two. My putting let me down as I was one over by hole-No. 11 but then I started three-putting," Ainamani said.

In the professionals' category, Entebbe golfer Vincent Byamukama took the biggest share of sh10m after finishing level overall, over 36 holes.

Other Entebbe products Deo Akope and Peter Sendaula finished second and third respectively, two and four strokes behind the winner Britam Insurance sponsored Byamukama who has maintained his tradition of winning at least a tournament in Entebbe every other year. UGU vice-president Innocent Kihiika (L) presents a trophy to Paul Baite who was third in the men'd Group C. Photo by Michael Nsubuga