Pope Francis prayed for my fractured hand ...
Next Story

AMISOM to flash out Al-shabaabs

The meeting agreed on measures to ensure Al-Shabaab is denied the freedom of organizing and instigating attacks against civilians.

The meeting agreed on measures to ensure Al-Shabaab is denied the freedom of organizing and instigating attacks against civilians.

The Deputy Special Representative of the Chairperson of the African Union Commission for Somalia, Simon Mulongo, has said a crisis meeting held in Mogadishu following the recent heavy bomb attack in Mogadishu has come up with measures to prevent future attacks.

Mulongo is a former MP who served as chairperson of the committee on defence and internal affairs.

A statement from the African Union Mission in Somalia (AMISOM) over the weekend said the Joint Crisis Management Team meeting, organised by AMISOM, was attended by senior UN officials, led by the Deputy Special Representative of the UN Secretary-General for Somalia Raisedon Zenenga, and top Somalia security chiefs including the new Chief of Defence Forces Maj. Gen. Abdiweli Jama Hussein.

Mulongo noted that the consultation held on Thursday was meant to avert and mitigate future incidents through improved security and enhanced coordination.

"The meeting has agreed on putting in place some mitigating measures of better response in future. We have a technical team that is going to work out more details in terms of sequence and form of response and how quickly that response can be, and secondly, we shall have our efforts coordinated in a manner that is more orderly and ensure that command and control issues are properly fleshed out," Mulongo explained.

He added that the meeting also agreed to have a standby team to respond to future incidents. 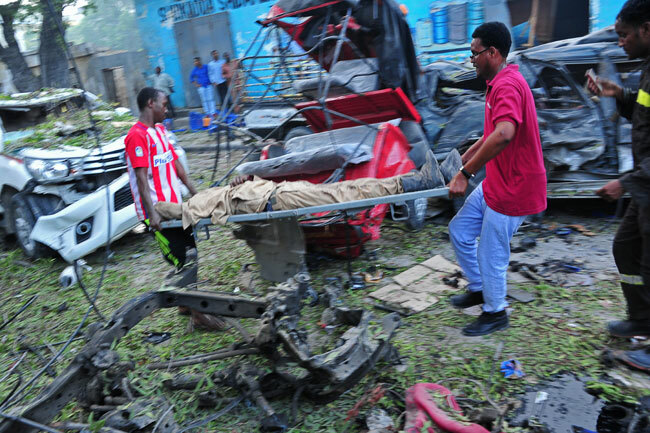 He said the meeting had agreed on measures to ensure the enemy, Al-Shabaab is denied the freedom of organizing and instigating attacks against innocent civilians.

On October 14, terrorists detonated a huge vehicle-borne improvised explosive device at a busy junction in Mogadishu, killing more than 300 people and injuring many more. AMISOM and UN joined hands in organizing a search and rescue operation and also offering other forms of aid to the Federal Government of Somalia.

Zenenga observed that there was need to focus on post blast initiatives after the recovery operations were complete.

"We are in the period of reconstruction and rebuilding, the main task falls on United Nations Development Programme and the United Nations Office for Project Services colleagues who are helping the government to assess the structural damage to the remaining buildings and what can be done to reconstruct the buildings and also to build the capacity that has been lost in the adjacent ministries," he said.

Zenenga called for help to build the capacity of the Federal Government to effectively respond to crisis caused by acts of terror and other factors.

Hussein, who represented the Minister of Defence, hailed the international community for its swift response in the aftermath of the incident. He appealed for more support.

"There are a lot of challenges that need to be addressed at the moment, which requires us to be united. We have to move forward and that means you have to do your part. We need the support of the international community to find solutions to these issues," Hussein said.

Lack of sleep boosts chance of death by heart failure

Too much sitting infront of TV may cut life short

'Eat while standing to stay healthy'