Kenya found itself in a dangerous limbo on Saturday after two days of violent protests sparked by a deeply divisive presidential election that left eight people dead and scores injured.

As Kenyans counted the cost of Thursday's chaotic and bloody ballot -- its second election in three months -- supporters of opposition leader Raila Odinga vowed to maintain their boycott of efforts to reschedule a vote in areas where they'd managed to block it.

Plans to restage elections in the protest-hit western Nyanza region where opposition supporters managed to prevent hundreds of local polling stations from opening, were postponed on Friday after election chief Wafula Chebukati said he feared for the safety of his staff. National Super Alliance (NASA) supporters get to the ground as police officers fire during a protest against Kenya's second poll in Kisumu, on October 27, 2017.AFP Photo / Yasuyoshi Chiba

In Kisumu, Kenya's third largest city where three people had died and dozens were injured as protests raged on Thursday and Friday, the move was welcomed as a modest victory.

"This is not really a victory, it's just the right thing to do," nodded Wilson Ochyeng, 38, sipping a beer at a bar after officials called off plans to stage the vote on Saturday.

"Imagine the number of deaths we would have had if they had tried to hold the election."

Two people were shot dead Friday as protests gripped western towns and clashes erupted in a Nairobi slum as officials counted votes from a ballot set to hand President Uhuru Kenyatta a landslide win due to Odinga's boycott.

Initial turnout figures suggested only about a third of registered voters turned up, tarnishing the credibility of an election boycotted by a large part of the 19.6 million registered voters.

At each others' throats

In Nairobi's Kawangware slum, one man was shot dead by police as clashes broke out between ethnic groups over the election, police said. A witness told AFP the violence started when a group of youths "started attacking people and questioning why people never voted".

Earlier, a man was shot dead during a confrontation with police in the western town of Bungoma.

The confirmed casualties raised to 48 the total number of people killed in election-related violence since the August poll.

The crisis is the worst since a 2007 election sparked politically-driven ethnic violence that left 1,100 dead.

The presidential re-run was ordered by the Supreme Court after it overturned Kenyatta's August victory over "irregularities" in the transmission of votes. 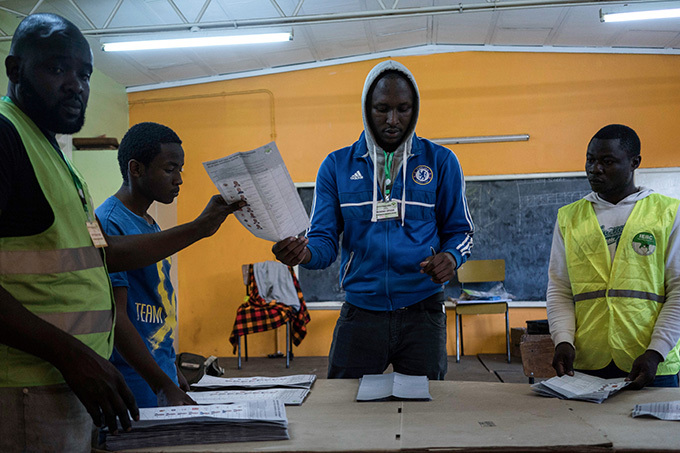 Officials count ballots at a polling station in a primary school in Lavington, a suburb of Nairobi, where 659 voters are registered and where only 167 persons voted on October 26, 2017. AFP Photo / Fredrik Lerneryd

But two weeks before the new elections, Odinga pulled out, calling for a boycott on the grounds that the electoral commission hadn't made the necessary changes to ensure a free and fair vote in a call that was widely observed.

Plans to re-run the vote this weekend in four western counties were eventually postponed over fears for the safety of polling officials, with Chebukati saying a future date would be announced "in the coming days".

According to the Supreme Court, the election re-run must be completed by October 31.

Odinga has vowed a campaign of "civil disobedience" and is demanding another new election be held within 90 days.