Kenya re - election marred with chaos
Next Story

This after the Chieftaincy of Military Intelligence (CMI) investigated the top Police commanders, for allegedly operating private cells and orchestrating armed robberies.

It is also alleged that some of the commanders were involved in committing abuses against refugees in the country, including repatriating some refugees back to their countries of origin, where they faced threats to their lives.

On Monday, CMI picked two elite commanders of the Uganda Police Force, which has over the past few years been at the centre of investigating high-profile cases.

Sources said Agasirwe is under investigation, among other things, for allegedly operating private cells.

There are also allegations implicating him in armed robberies, while Aguma is implicated in the illegal repatriation of refugees.

There are reports that the President had received a complaint from a United Nations agency regarding the refugees. 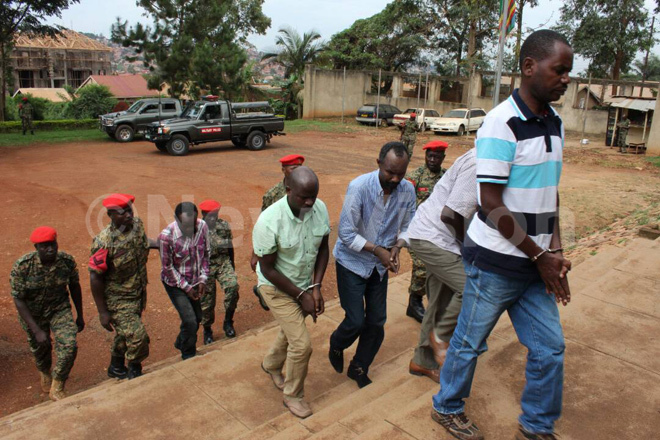 Police spokesperson, Asan Kasingye on Tuesday confirmed the arrest of the two elite commanders, but remained cagey on the details.

"It is true, but there is no official communication from the army," Kasingye told New Vision. Kasingye added:

"The army has not arrested anyone from Police," he stated. The Inspector General of Police (IGP), Gen. Kale Kayihura, has so far not commented on the matter.

"It is uncouth for a commander, whose motto is ‘to protect and serve', to hold suspects in private cells," a top-ranking Police officer told New Vision, yesterday.

It is reported that CMI is investigating allegations that the Police officer "could hold suspects at ransom, on trumped up charges and extort millions from the families of victims".

Besides the two officers, CMI has arrested many operatives attached to the Police's Flying Squad Unit (FSU).

Those arrested are mainly operatives who have served in the unit for long and have handled many high-profile cases. Sources at the Police headquarters told New Vision that CMI commenced the investigations on the directive of President Yoweri Museveni.

Both Kasingye and the FSU commandant, Herbert Muhangi, could not be reached for comment.

He argues that due to internal intrigue, some officers have authored negative reports against their colleagues and forwarded them to their superiors.

The officer cited the recent clash between Police and ISO operatives over a woman, Christine Mbabazi Muhoza, alleged to have been a mistress of fallen Assistant Inspector General of Police Felix Kaweesi.

The woman is said to be in possession of vital information about the assassination of Kaweesi. Muhoza is currently under the protection of the Special Forces Command (SFC) at a house in Lungujja, a city surburb.

SFC took over the protection after a clash between Police and ISO operatives. Police claimed they had received SOS calls from Muhoza. Following the murder of Kaweesi in March, President Museveni tasked the Police chief (Kayihura) with cleaning up the Police force.

So far, the PSU has written to the Police's legal directorate, recommending the sacking of at least 80 Police officers over misconduct.

A total of 105 officers, both junior and high ranking, are under probe by the PSU.

The cases range from extortion to robbery, concealing evidence and fraud.