After a two-hour journey from Kampala to Jinja where FINCA Bank first opened its doors to Ugandans, the FINCA team was welcomed in Buwenge sub-county by a group of women with dance and songs detailing what FINCA has done for them.

“Thank you FINCA for helping us. We have been able to educate our children. We have a source of income. We have bought plots and built houses,” they sang.

The group comprised women who joined the bank in 1992. In unison, they celebrated FINCA’s 25 years of innovative, responsive and impactful financial services in Uganda. These women represent countless others whose businesses have grown over the years thanks to FINCA, a micro-finance deposit-taking institution.

FINCA’s story started in 1984, when its founder John Hatch conceived the idea of village banking to serve low income entrepreneurs. A village bank is an informal self-help support group of nine to 30 members, predominantly female heads of households.

At that time, women were marginalised and did not own assets, so the services aimed at alleviating them from poverty and ensuring financial inclusion. The members meet once a week to not only pool working capital loans, but also get mentorship and skills training. 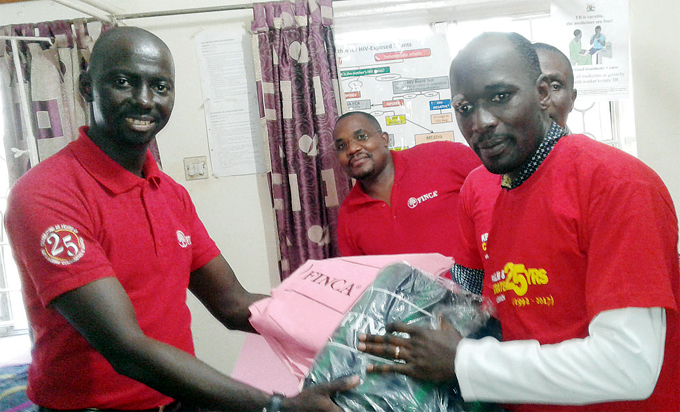 The next year, 1985, Hatch launched the programme in Latin America, El Salvador and registered enormous achievements in financial stability. Consequently, FINCA made expansions in the 1980s in Latin America, the Caribbean and in the 1990s it entered the newly independent states of the former Soviet Union and Africa.

Uganda was the first country outside Latin America that the FINCA group ventured into and the bank initially operated as a credit only institution.

“We set up operations in Jinja in 1992 with a handful of staff and we leveraged the powerful village banking methodology,” James Onyutta, FINCA Uganda’s managing director, says.

The bank’s mission has always been to alleviate poverty through lasting solutions that help people build assets, create jobs and raise their standard of living. CLICK HERE FOR MORE ON THIS STORY

FINCA has been instrumental in promoting financial inclusion

FINCA Uganda is a leading micro deposit-taking institution that offers services such as saving, loans and money transfers. It does this through a network of 27 branches with six service points countrywide. T

he company has 536 staff serving 140,000 customers across Uganda. These services are based on the company’s mission of providing basic financial services to low-income entrepreneurs, so that they can be able to build assets and create jobs.

“We pride ourselves in financial services that will create impact (financial and social) in the lives of the people that we serve,” James Onyutta, the managing director of FINCA Uganda, says.

“The bulk of our loans in Uganda still target low income entrepreneurs, with average loan sizes at less than sh1m,” Onyutta states.

It is important to focus on this group because prior to the age of mobile money, financial inclusion in Uganda was less than 20% and now it is just over 50%.

“It is a wealth of opportunity for us to make meaningful economic impact in the markets we serve. The whole mission is to make financial services inclusive.”

Jackie Kamara is the FINCA manager of Kawempe branch. She spoke about her 19 years of service at the bank

What does celebrating 25 years mean to you as a FINCA employee?

Personally> my banking career started with FINCA. Therefore, I owe all my achievements, skills and experience to FINCA and I am happy and proud to have been a part of this journey. For how long have you worked with FINCA? I have worked with FINCA for 19 years now; serving in different capacities and I am grateful to have been part of her success story.

What employee initiatives has FINCA put in place to ensure that you hit your targets?

There are many initiatives, but key among those include goal setting and performance management programmes to enable us focus on our targets and key priorities. We have a bonus scheme where staff are rewarded for achievement of targets on a monthly basis. There is also reward and recognition for good performance including team building and networking opportunities. Consistency in performance has enabled staff to be given opportunities to build their careers such as sponsorship for further studies. We also have exchange programme opportunities for staff to go and work in other FINCA subsidiaries worldwide.  FOR MORE ON THES TESTIMONIES

When a customer sticks with a company for 25 years> there must be something special about that relationship. FINCA has a big clientele from diverse backgrounds. No customer is too big or too small for the financial institution. Jacquiline Emodek spoke to some of these clients. We bring you excerpts of those conversations.

I heard about FINCA Uganda from a friend called Kivejinja in 1995 when I was running a restaurant, but I was struggling to pay school fees for my five children because my husband would constantly snatch my money on the pretence of paying fees for the children. After doing this three consecutive times, I decided to take my money to the bank so I opened up an account with a group in FINCA. At this time I contributed sh25,000, but would acquire loans of sh250, 000. From the loan, I sent sh30,000 to my village in Kamulo and started growing maize which I would process into flour and cook in my restaurant. I also bought a plot of land in the village and constructed rentals which earn me sh.700,000 monthly. I have been able to educate my children up to university and they have qualified as teachers and a pharmacist.  FOR MORE ON THESE TESTIMONIES