The Roman Catholic Bishop of Kiyinda-Mityana diocese, Prof Joseph Antony Zziwa has praised the Carmelite Sisters for their deep religious commitment, which has inspired many Christians in Uganda.

"Dear Sisters of the Carmelite Order, you are a blessing to us. You have been our light all these years. Your zeal for the Lord has inspired and touched the lives of many people in the diocese and beyond.

The fact that you live in an enclosure, but many people know you, is a proof that the influence of your vocation is enormous," said Zziwa.

The Bishop was presiding over the thanksgiving mass for the 50th anniversary of the presence of the Carmelite Sisters in Kiyinda-Mityana.

The celebration took place at the Sisters' monastery at Kiyinda-Mityana on Saturday. 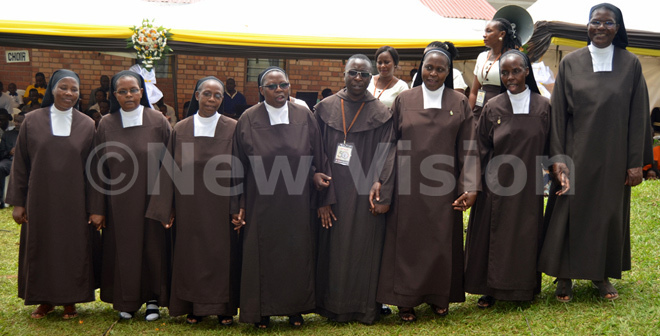 The Carmelite Sisters sing as they celebrate their 50th anniversary

Zziwa further praised the nuns: "Since you arrived here in 1967, you have been working and praying for us. You have enjoyed the hospitality of the local people and also eaten their food.

"But you have also suffered with them during bad times, for example the droughts and civil wars of the late 70s and early 80s.

"In any case, you remained with the people. God has also been faithful to you, which is why you have grown from strength to strength."

The Sisters do not come out of their convent/monastery. They are confined in their monastery, where they devote most of their time praying for the Church, the nation and the world.

Inside the monastery, the Carmelite nuns engage in activities such as designing Church vestments, making hosts and gardening.

The Carmelites are so much confined to the monastery that they are not allowed to go back home to visit their relatives. Any modern Ugandan would find this kind of life awkward.

But, the Carmelites seem to be joyful and satisfied with the ascetic life-style that they lead. Their immense love and zeal for God makes them see as beautiful the situations that the other people would consider to be challenging.

The Carmelite Sisters came to Uganda in 1967. They were invited by the late Archbishop Dr Joseph Nakabaale Kiwanuka, following a solidarity meeting he had had with Bishop Joseph Stimple (RIP) Augsburg.

The first group of Carmelite came from the monastery of Welden (in Germany). They arrived in Uganda on October 17, 1967 and were received by the late Emmanuel Cardinal Nsubuga, who also helped them to establish their monastery, Our Lady Queen of Martyrs Carmel, at Kiyinda-Mityana, where they have stayed since then.

In his message of gratitude to the Sisters, Emmanuel Cardinal Wamala expressed concern about the continuity of contemplative monastic life, which seemed to be uncertain.

He thus appealed to the parents and youth in Uganda to "discover the treasure in vocation to contemplative life."

The Apostolic Nuncio, Archbishop Michael August Blume also spoke well of the Carmelites and their contemplative way of life.