I will not withdraw age limit removal Bill...
Next Story

The event is intended to commemorate 100 years of Pontifical Missionary Union (PMU) and 50 years of the Second Vatican Council Decree on the Church’s Missionary Activity (Ad Gentes Divintus).

Some of the delegates that are attending the missionary congress at Pope Paul Memorial Hotel Rubaga. Photos by Mathias Mazinga

The event is intended to commemorate 100 years of Pontifical Missionary Union (PMU) and 50 years of the Second Vatican Council Decree on the Church’s Missionary Activity (Ad Gentes Divintus).

The first ever Catholic Missionary Congress in Uganda is underway at Pope Paul Memorial Hotel, Rubaga in Kampala. The congress is hosted by the Uganda Episcopal Conference Department of Pontifical Mission Societies (PMS).

The event is intended to commemorate 100 years of Pontifical Missionary Union (PMU) and 50 years of the Second Vatican Council Decree on the Church's Missionary Activity (Ad Gentes Divintus).

Pontifical Missionary Union is one of the four Catholic missionary societies under the direct supervision of the Pope, whose aim is to promote missionary awareness, prayer and cooperation in the universal Catholic Church.

The weeklong congress has brought together 171 delegates from five ecclesiastical provinces in Uganda who include bishops, religious men and women, diocesan pastoral coordinators, education secretaries, head catechists, heads of the laity, women leaders and directors of pontifical mission societies.

The congress will accelerate the promotion of missionary cooperation, enhance the presence of Pontifical Missionary Union in Uganda and put in place strategies for a missionary oriented Church, which is self-sustaining, self-propagating and self-administering."

The facilitators of the congress include international and local experts in Theology. Among them are representatives from the international secretariat of Pontifical Mission Societies in Rome and the Secretary General of the society of St Peter the Apostle,   Rev Fr Fernando Domingues. 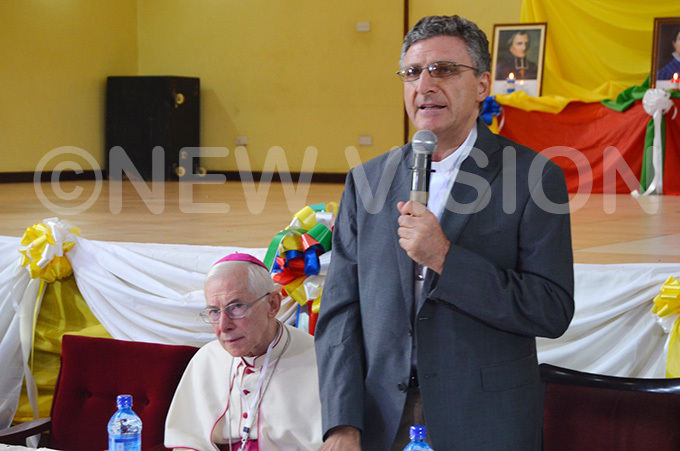 The President of the Uganda Episcopal Commission for Missions Bishop Damian Giulio Guzzetti delivers his remarks.

The congress is running under the theme:  Mission Concerns Us All: A Call to Animation and Cooperation (MK16:15).

Fr Balikuddembe further explained: "The Congress will include technical sessions and case studies through interaction with the participants. The delegates will assess the implementation and impact of the Ad Gentes Divintus in instilling the missionary spirit in the local Church of Uganda today, conducting an in-depth analysis of the work of Pontifical Missionary Union, as well as carrying out a study and evaluation of the history and work of Pontifical Missionary Union in Uganda. Discussions are revolving around the history and Theology of Ad Gentes, leadership in mission, experience of a missionary, and, the missionary activity of the Church in the digital age.

The department of Pontifical Mission Societies (PMS) was established in Uganda in 1983 and since then, it has predominantly been preoccupied with animation and formation of pastoral agents and all the faithful carrying out its work. PMS has four different categories which are: The PMS for the Propagation of the Faith (for adults), PMS for St Peter the Apostle (for the youth), PMS for Missionary Holy Childhood (for children) and, PMS of Missionary Union (for priests, religious and lay ministers). Each society celebrates its spirituality annually.