The misery of Uganda's ex-presidents
Next Story

A wreckage of taxi registration number, UAW 907L which was involved in an accident at Bugolobi Kampala on October 11, 2017 Photos by Ronnie Kijjambu

One person died Wednesday afternoon after a motorcycle he was riding got involved in an accident at Bugoloobi, a city suburb.

Isaac Tamale 30, who was riding a red motorcycle Reg. No. UEA 897P, died on spot around the closed Nakumatt supermarket after he was knocked by a speeding taxi Reg. No. UAW  907L from Mutungo heading to the city center.

Baker Wamala, an eye witness told New Vision  that the accident also involved  another commuter taxi which had six passengers and a Pioneer passenger bus  Reg. No. UAR 677J and the Kakira Sugar factory lorry truck Reg. No. UAU 472L, which rammed into the taxi.

They were rushed to Kiruddu Hospital for treatment.

The other victims; Primrose Nabasa Mugabo, Weni Kaseero and Douglas Abaho sustained minor injuries and were taken to a nearby medical centre for treatment and further checkups. 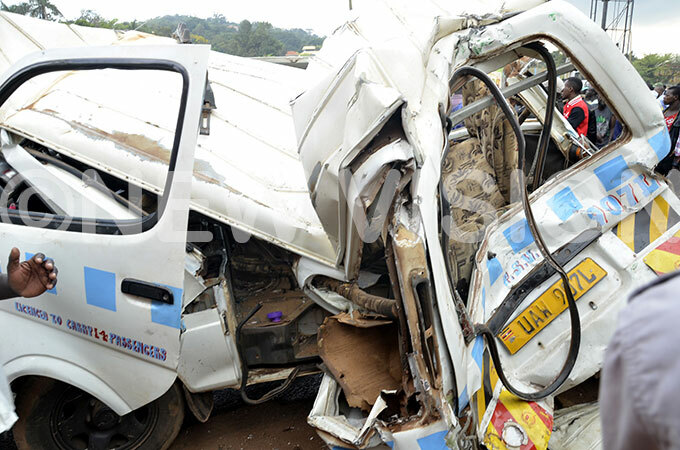 He was knocked as he was joining the road.

"The taxi driver tried to avoid Pioneer bus which was offloading passengers from the road and rammed into Tamale. The truck came from behind, failed to brake hence knocking the taxi," Mugisha narrated.

Nakawa Division Mayor, Eng. Ronald Balimwezo, rushed to the scene of accident with two ambulances which rushed the injured to Kiruddu Hospital.

Charles Sebambulidde, the spokesperson Kampala Metropolitan Traffic told New Vision that the accident was caused by a truck which failed to break and rammed into the taxi, Pioneer bus and motorcycle.

He warned drivers to always check the mechanical conditions of their vehicles before embarking on their journeys.

Why Ricco should go back home

The Second housemate to leave the house is....Lucille