Gov't pinned on compensation funds for Kap...
Next Story

Theatre helped me save for retirement - Senkubuge

Charles James Ssenkubuge, a former member of Bakayimbira Dramactors, retired at 50. David Lukiiza talked to him about life in retirement and how he prepared for it.

Ssenkubuge was the brain behind Bakayimbira Dramactors, one of the oldest drama groups in Uganda.

But when the era of FM radios dawned on Uganda, He joined Radio Simba's morning show, Binsanga Wano, for which he got renowned. He later quit Radio Simba in 2012 and took on a new job at Salt Media as a station manager in 2014 to preach the gospel.

Ssenkubuge, who is also a playwright, has acted in skits airing on different television stations, including Bukedde.

He employs humour in every art piece he pens. Prominent among them are; Kigenya Agenya, Akakomo and Balagawa, which are now television series. Ssenkubuge's career in comedy peaked in January, 2001, when he picked nomination forms, to contest for the presidency.

After two months of holding rallies, which looked more like drama shows, he pulled out of the race on March 6, citing violence and intimidation.

Ssenkubuge was born on December 2, 1962 to the late Phineas Nunu Mugambe and Eva Norah Nakintu of Sanda Busiro Nakawuka in Wakiso district. He is the last born in a family of 20 children.

In 1967, he started school at Sanda Primary School, where he actively participated in debates. He later joined Uganda Air Force Primary School in Entebbe, where he sat for his Primary Leaving Examinations in 1975.

Thereafter, Ssenkubuge joined old Kampala Senior Secondary in 1976 for O' level and later Makerere High School for his A' level in 1982.

He joined Makerere University in 1983 where he pursued a bachelors of arts degree in literature and philosophy. He then worked part-time at Wall Ford Meddles, a British-owned company, in the clearing and forwarding department in 1986.

"I was doing part-time because we had started a drama club called Bakayimbira Dramactors. We started it in 1980 while I was still in secondary school with my friends," he said.

"Eventually, we got so busy that I had to come to reality with the situation that our drama club needed more time, so I resigned from my job to concentrate on my dream."

However, it took Ssenkubuge seven years of juggling between Wall Ford Meddles and Bakayimbira. "I never wanted my drama dream to die," he said.

Ssenkubuge still remembers his first stage performance at the National Theatre in 1981. "The play was called Katete Omumpembe. It really gave me morale to pursue drama because of the high turnup," he said.

"Those days, we did not have a public address system. So, we had to raise our voices to make sure everyone hears, and follows the play." Ssenkubuge had teamed up with Andrew Benon Kibuuka, a close friend of his since primary school, to grow the club.

In 2016, Ssenkubuge made it known to his friends and fans that he had decided to retire. Initially, they were not supportive. "They were shocked! They said I was retiring at a time when the club needed me most," he said.

"During my speech at one of the functions in Kampala, I told my team that I had decided to retire from acting with a play titled Magumba. Many were not supportive because it was not common for people to retire before the usual retirement age."

He says messages from friends and fans kept coming in, asking him to stay on, but he thought, that would be cheating the people he had mentored.

"If I had stayed on, I would have denied the young people I had mentored opportunities to shine. It was the right time for them to shine," he said. Being one of the directors of Bakayimbira, the management gave him a task to accomplish before retiring. 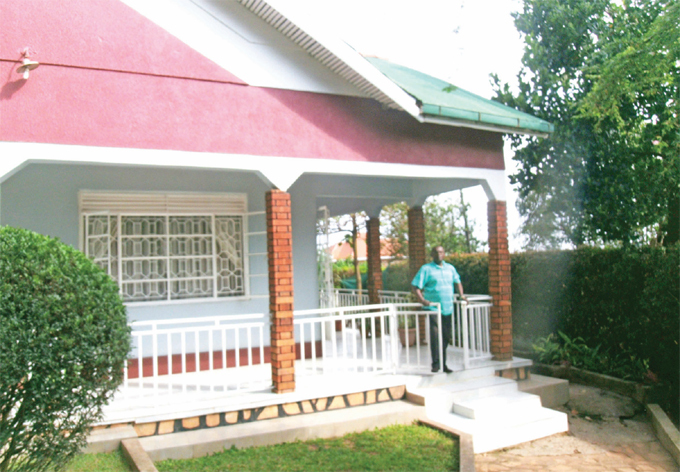 Ssenkubuge bought the land on which he built this house at sh1.5m. Photos by David Lukiza

"I was tasked with writing a new play. After some thought, I penned Bongo Munsi Ya Bongo. It is political satire that reflects the world we live in today," he recalls.

Ssenkubuge says theatre production is like fishing. Every time you cast your net, you get money. However, things might not always be the same. So it is always better to plan for retirement the moment you start earning. "I started saving from theatre productions in 1981.

This is because I knew that one day I would have to leave the stage for other generations. I was never extravagant with my lifestyle," he revealed.

Ssenkubuge says he bought an acre of land in Makindye on which his house sits, at sh1.5m, which he paid in installments. He say he constructed his house with his savings.

Ssenkubuge built a storeyed house which he rents out. He also has a farm in Sanda, Nakawuka in Wakiso district. The farm sits on 25 acres of land that belonged to his late parents.

Ssenkubuge adds that he plans to expand the farm. He is also eyeing cattle keeping. Ssenkubuge turned 50 in 2012 and received his National Social Security Fund savings.

"I was given sh50m, from which I bought a public address system at sh20m. I hired it out to Bakayimbira Dramactors who pay me after every performance. I used the rest of the money for poultry farming," he said.

"When I am not at Salt Media, or directing plays, I spend my time monitoring workers on my farm in Wakiso." He say he is not struggling financially and has the resources to sustain himself over a long period of time.