The Ugandan team won cash prizes ranging from 20,000 to 30,000 Kenyan shillings per win

The Ugandan team won cash prizes ranging from 20,000 to 30,000 Kenyan shillings per win

Wazzir Kakooza, a renowned owner of Vintage cars in Uganda, attended the CBA Africa Concours d'Elegance in Nairobi where he won the Meritorious Award.

Kakooza who participated in the show with his two of his vintage cars a 1980 Corona Mark II and a 1991 Mitsouka Le-Seyde, did not only win the award, but also had his cars compete and win in different categories

His two cars were among the 11 cars and two motorcycle entries from Uganda that participated in this year CBA Africa Concours d'Elegance held on September 24, at Ngong Race Course in Nairobi and a number of them performed well in different categories.

Kakooza shows off his prize

According to Dr John Baptist Niwagaba, the chairperson of the Uganda Vintage and Auto show, Kakooza's 1991 Mitsouka Le-Seyde won second in the Class 6 where Touring cars and wagons from 1801-2000cc were Judged.

"His other car the 1980 Corona Mark II won the second position after Ronald Walusimbi's 1974 Mercedes Benz W114 came in first position in the  Class 7 where touring cars and station wagons from 2001-2500cc were Judged,"Says Niwagaba.

Kakooza notes that participating in CBA Africa Concours d'Elegance in Nairobi has really opened doors for him.

"I got contacts from Kenyans and for me that is not something small," notes Kakooza. 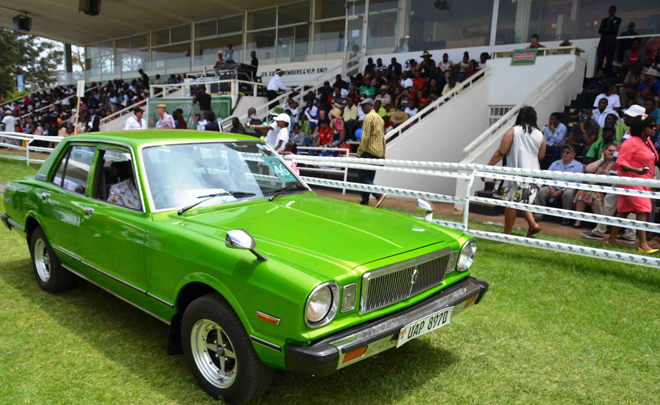 Besides Kakooza, other Ugandans who also participated, scored high in certain categories such as in Class 2 where utility vehicles, vans, pickups made after 1977 were judged, Edgar Katamujuna, 1977 VW Kombi   won third position.

Kutesa hails India for its cooperation with developing countries