'A few corrupt PPDA officials dent its image'
Next Story

Audiologists, Otologists call for national policy on treating the deaf

A hearing aid, which is the cheapest, costs between sh2.5m to sh6m. The cochlear implant is used by those who are completely deaf and it requires surgery costing over sh100m.

A hearing aid, which is the cheapest, costs between sh2.5m to sh6m. The cochlear implant is used by those who are completely deaf and it requires surgery costing over sh100m.

Ear, Nose and Throat (ENT) specialists have called on the Government to provide funding for surgery for the deaf.

Dr. Micheal Awubwa, a lecturer at Makerere University, noted that if the Government funded surgeries for the deaf, people from poor families would be able to get the services.

According to a World Health Organisation (WHO) report 2016, about 330 million people suffer with chronic ear infections or discharging ears worldwide, where 32 million are children.

It further indicates that about five of every 1,000 children are born deaf or hard to hear worldwide, with about 50% cases in Sub-Sahara Africa, where Uganda falls.

According to Awubwa, young people between 12 to 35 years are also at risk of suffering hearing loss, due to exposure to noise in recreation settings like headsets, headphones, and clubs.

He added that about 60% hearing loss among children can be prevented and can be healed if treatment is sought early. 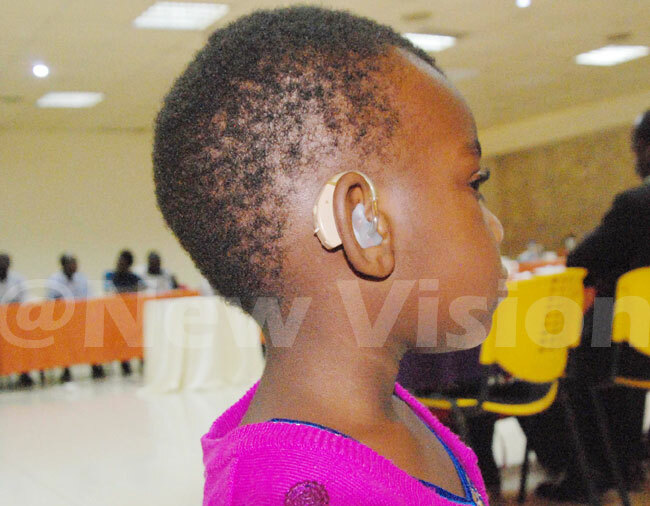 "The cost of developing curriculums for the deaf and other similar activities would be reduced, if the affected people are treated using the hearing aid and a cochlear implant," he explained.

"The hearing devices are very expensive. Doctors recommend surgery if a parent is financially stable. If not, then they have to communicate using sign language," he added.

Dr. Doreen Nakku, the head of the ENT department at Mbarara University of Science and Technology (MUST), said several Ugandan children are at risk of becoming deaf if there are no urgent government interventions, such as checking hearing at birth.

Awubwa attributes the prevalence of hearing loss in Uganda to having few ENT experts in the country.

"We are only 30 ENT experts responsible for over 35 million people in the country We would require about 800 more experts to combat the problem," he said.

He cited lack of research, testing equipment for surgeries, explaining that there are only two hospitals - Naguru and Mulago - that have the hearing treatment equipment.

Cost of treatment
There are several devices used to help minors, youths and adults to restore hearing, which include hearing aid, a cochlear nucleus 5 implant and the latest nucleus 6 Kanso, that are all on the pricy side.

A hearing aid, which is the cheapest, costs between sh2.5m to sh6m with a Bluetooth device that enables a child to learn how to speak through phones and TV sets at home.

The cochlear implant is used by those who are completely deaf and it requires surgery costing over $30, 000 (over sh100m) and can be got on order from Nairobi Express Services the main distributors of cochlear implants in East Africa.

There are only 16 children in the country with the cochlear implants and majority of them had surgery either in United Kingdom or India.

However, cochlear surgeries can be conducted at Mulago Hospital which has registered two successful operations and hearing was restored.

After a useful operation, the child undergoes therapy, speech classes by audiologists and Otologists which costs about sh70, 000 a day until the child is able to speak.

Ogwang noted that he spends over ks2000 daily, every two weeks in a month for his son to have speech therapy among others at ABC Wanyaki way Westland in Nairobi.

He however jubilates since his son can afford to hear, and is learning how to speaking.

Maintenance
If properly taken care of, the hearing aid and cochlear plant can last for life but this comes with maintenance costs for spear parts, batteries among others.

A packet of six power batteries used in a hearing aid costs about sh20, 000 and can last of five months which is fair price.

Spare parts for cochlear implants are much more expensive and yet they are the most effective ones, but cables cost sh500, 000, and sh1.3m for a rechargeable battery.