According to sources,OPM officials inflated the numbers and diverted money apportioned to take care of the Bududa victims.

According to sources,OPM officials inflated the numbers and diverted money apportioned to take care of the Bududa victims.

When the Bududa landslides occurred in 2010, it left about 300 people dead and over 3,000 displaced.

This prompted the Government, through the Office of the Prime Minister's (OPM) Disaster Preparedness desk, to relocate the affected people.

As a search for land to relocate the affected people went on, affected residents from Nametsi village in Bukalasi sub-county were temporarily resettled at Bulucheke camp in Bududa.

At this camp, OPM officials were to register the affected people from the high risk areas and the survivors from Nametsi village, whom government decided to build houses for at Panyadoli Internally Displaced People's camp in Kiryandongo district.

At first, the Government put up temporary shelters where people were relocated before constructing permanent homes for them. 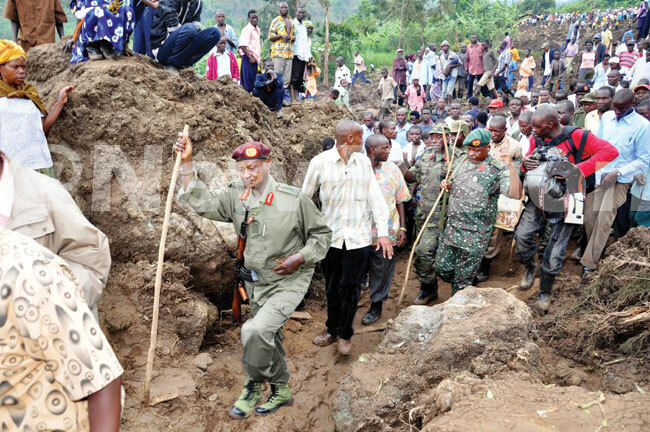 Land search
Another landslide occurred in Bududa in 2012. President Yoweri Museveni, who visited the area, directed the then First Deputy Prime Minister, Gen. Moses Ali, to look for land to resettle the victims.

A sub-committee that Gen. Ali formed, identified options including Luwero, Kiryandongo and Western Uganda. Previous searches had also talked about land in Kayunga, Bulambuli and Buikwe districts. After futile negotiations for land in Kayunga, it was later agreed that the 800 households be resettled on 800 acres of land in Panyandoli, Kiryandongo.

But just before being relocated, a team from OPM, together with district leaders from Bududa and 60 members from Bulucheke camp, who represented the victims, went to Kiryandongo to inspect the land.

A total of 500 people from high risk areas were to be registered first, but OPM officials ended up registering about 1,200 people, according to the Bududa district chairman, Wilson Watira.

"Of the 1,200 registered, 603 were relocated to Kiryandongo and settled in semi-permanent structures for six months as they awaited permanent structures and 2.5 acres of land each, for cultivation. During this time, government gave them food supplies until their crops matured," Watira explained.

Conflicting figures
According to sources that preferred anonymity, officials from OPM inflated the numbers so that money apportioned to take care of the Bududa victims could be diverted.

"The Government allocated sh5b for the relocation of the purported 2,000 victims, but only 603 were taken," the source revealed. These claims are amplified by local leaders and residents.

According to one survivor, Michael Wakoko, the number of the dead was exaggerated to 300 because Nametsi village could not accommodate that number. He estimates that there were about 100 people who died, a number that the district chairman (Watira), also concurs with.

Watira also said of the 603 people taken to Kiryandongo, only 250 people were from Nametsi village. "I don't know where the other people came from."

Julius Weleka, the chairman of the Baduda Internally Displaced Persons at the time of relocation to Kiryandongo in 2010, also had a different figure. He claimed that they were 2,000 people relocated to the camp and not 603.

But sources in Nametsi village said at the time, Weleka was living and working in Kalangala district. "We were shocked to find out that he also made it on the list of people that were relocated to Kiryandongo," the source observed. 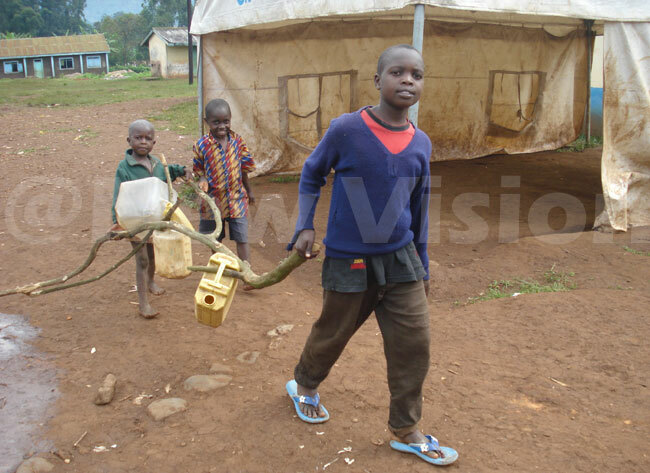 PIC: Children carry jerrycans at the Bulucheke camp as they go to fetch water

Officials in OPM faulted
The Bududa district leadership faulted OPM officials for giving contradicting numbers about the people relocated. Residents suspect this contradiction could have been done for selfish reasons.

Former Minister for General Duties in OPM, Prof. Tarsis Kabwegyere, was on the spotlight for diverting sh8b meant to purchase land for resettling Bududa landslide victims in the Mt Elgon region.

According to the committee on Presidential Affairs, Parliament approved sh8b in the 2013/2104 financial year. However, out of the sh8b, only sh4b was used and no land was bought.

The Auditor General, John Muwanga, in his 2012 report, pinned the commissioner of relief, disaster preparedness and management, John Martin Owor, for claiming that a vehicle registration number UG 0123Z was used to transport victims and their property from Bududa to Kiryandongo, yet it actually transported food to Bududa for survivors.

A review of 23 companies that supplied food also revealed that the companies were overpaid by sh8.6b by Owor.

Muwanga noted that Owor claimed to have purchased 50 cartons of salt from Sunrise Hardware for Bududa victims, but an inquiry from the shop revealed that they deal in only building materials.

Owor further claimed that they purchased tarpaulins, nails, kerosene and lanterns, whereas not.

In 2014, police opened up investigations into the procurement and supply of food and relief items for Bududa victims by OPM staff.

The police probe followed the May 2013 parliamentary Public Accounts Committee (PAC) observations and recommendations on advances to 11 OPM staff.

Returning to Bududa
Several people have since returned to Bududa after suffering what they call deplorable conditions in Kiryandongo.

Jack Khaukhe, a teacher at Masahame primary school in Bukalasi sub-county, lost eight of his family members in the landslides, who included his wife and children.

He was among those that were moved to Kiryandongo in 2010, but says they lived under deplorable conditions that forced him to return to Bududa.

Khaukhe says for the time he lived in Kiryandongo, he slept at a relative's house, Michael Wangha, because he did not have his own accommodation and chose to voluntarily return home in April 2012.

But the State Minister for Disaster Preparedness, Musa Ecweru, recently told New Vision that as of the 2015/2016 financial year, about 6,400 families had been relocated to different areas.

He said they have acquired 2,868 acres of land and 13km of paved access roads in Bulambuli district to cater for the people in high risk areas in Bugisu sub-region.

Why not cover all regions?

Feedback is good for you