President says Kyotera is a backbone of NRM
Next Story

Prime Minister Dr. Ruhakana Rugunda has transverse a newly created district of Rukiga that has been curved from Kabale district canvassing support for NRM flag bearers ahead of today (Thursday elections).

"We lost Rukiga in 9th parliament to FDC until we get energetic young and vibrant boy Ndugu Kabafunzaki who reclaim our area back to NRM. Now that we are NRM I don't want to hear that we have another FDC here," he said.

Rugunda addressed main rallies at Kamwezi play ground and Mparo play ground and mini rally at Muhanga trading centre where he assured people that government is committed to support famers with seeds and food relief who lost their crops to heavy rains that destroyed their crops.

However, Rugunda warned against degradation of environment and directed government agents from parish to district to make sure all encroachers of wetlands vacates them as soon as possible. 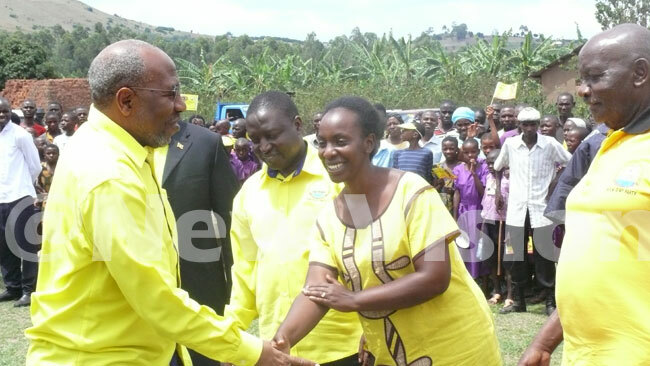 He also advised farmers to make terraces that would interrupt running water in hills that normally destroys houses and gardens.

"You made all hills bear and you no longer use terraces which the major reason for the loss of gardens and houses due to heavy rain. You must respect environment if we are to get out of this problem," he advised.

He said Museveni will come to "thank you for supporting NRM flag-bearers."

Finance state Minister who is also NRM Chairperson for greater Kabale, David Bahati said there will be a need of electing their own NRM chairperson who he said will keep working with whoever is elected until he thinks that district is old enough to stand on its own.

"The fact that Kabale district has given birth to Rubanda and Rukiga district we shall keep together as one until the time we think your old enough to support yourself," he said.

Caroline Kamusiime Muhwezi assured electorate that she would take their interests in parliament once elected MP but not her personal interests.

Dieselgate: timeline of a global scandal