According to Sylvia Akello, the Otuke Woman MP, tackling climate change needs collaborative efforts from the leaders at various levels.

According to Sylvia Akello, the Otuke Woman MP, tackling climate change needs collaborative efforts from the leaders at various levels.

Members of the public have been urged to embrace tree planting and protection of wetlands in a bid to stop the various effects of climate changes.

This, according to Sylvia Akello, the Otuke Woman MP needs collaborative efforts from the leaders at various levels, residents and civil society organisations.

"In February and March, one can rarely see green pastures in Karamoja region, you have witnessed prolonged drought in other areas of the country.

There is need for individuals in different capacities to come up and fight environmental degradation," she stated, adding that local communities have a tendency of threatening politicians that they would vote them out of their positions in case they evict them from wetlands.

During the seventh national Water and Sanitation (WASH) dialogue at Eureka Place Hotel in Ntinda yesterday, Akello, who is also a member of WASH parliamentary forum noted that even the landslides that have ravaged the country in different areas such as Bududda and Kigezi are as a result of climate change.

The dialogue was organised by the Uganda Water and Sanitation NGO Network (UWASNET) under the theme "Integrating climate change adaption in water and sanitation and hygiene service delivery". It attracted various heads of NGOs and government officials, especially from the water ministry. 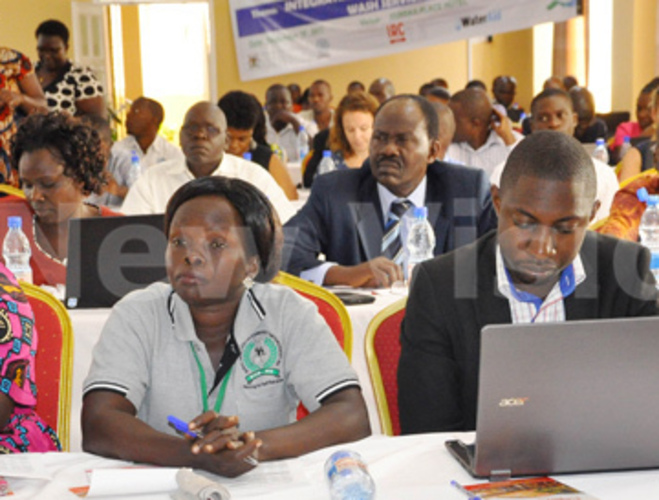 Participants during the forum at Eureka Place Hotel yesterday

She said the locals may not realise the benefit of protecting the wetlands, but insisted all concerned citizens must take part. She pointed out at technocrats whom she said have not taken time to sensitise the public but left the work to be done by the politicians and Civil Society Organisations.

Ahmed Eldaw, the regional co-ordinator for Global Water Partnership East Africa said there is need for the Government to integrate climate change into planning process, developing climate change plan among other ways to fight it's effects.

Eldaw who was the dialogue's guest speaker also said there is need by government agencies to investigate the climate change and its impact on national water and sanitation.

"Also include climate change adaption on measures and WASH planning into the national and sector investment plans. Strengthen the establishment of water resources and WASH efforts," he stated.

Doreen Kabasindi Wandera, the executive director for UWASNET, noted that more innovative means must be adopted in tackling the climate change effects. She said even the religious leaders should come on board.