Mugisha is an agro-ecologist in the middle...
Next Story

The trick in farming at home

Bruhan Sekagya with one of the 26 cows he keeps at his home. Photo by Umar Nsubuga

For the last 19 years, Bruhan Lugoloobi Sekagya, in his 30s, has been practicing dairy farming on a 45x45ft piece of land at his home Ntooke village, Kayunga sub-county, Kayunga district.

Sekagya constructed several wooden and brick structures around his home for cows.

He owns 26 hybrid cows, Sekagya, who holds a diploma in carpentry and joinery from Ahmed Seguya Memorial Institute in Kayunga district and says that he was pushed into raring animals at home to supplement his monthly salary.

Of the 26 cows currently on Sekagya's farm, 15 are female and six of these are lactating.

"I receive an average of 150 litres of milk everyday" he says.

According to Sekagya, he spends around sh3m of this on maintaining the animals and paying his workers, leaving him with sh2m profit from the milk. 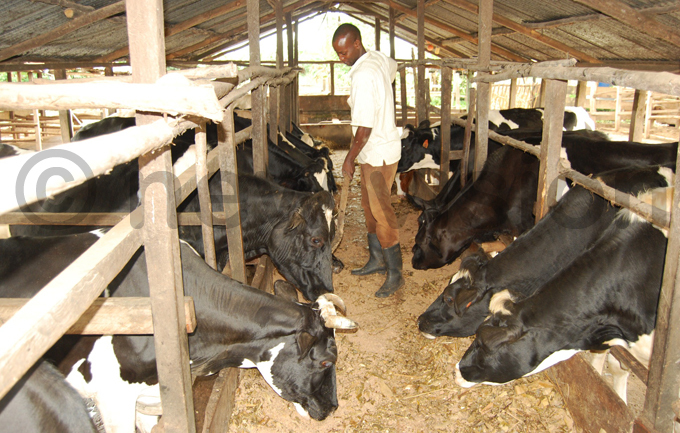 He also gets income from growing coffee, orange and mango seedlings. Every two months, he sells 1000 seedlings.

He earns at least sh10m from his fish ponds every seven months and spends over half of the money on restocking the ponds and paying workers.

For long, Sekagya and his family members have had to endure the chocking smell of animal waste and bites from dangerous insects, like mosquitos, tsetse flies and cockroaches.

Before devising a better way of dealing with the animal waste, the smell around his home was usually too much that it covered the all village.

"The smell welcomed every visitor to my home and our neighbours shunned us," Sekagya said.

To deal with the smell, Sekagya would collect the waste from the animals' houses in one place and would dig up holes in the garden where he dumped and buried it. In turn, the waste acted as manure at his farm that increased his yields. But burying the waste under the earth could not provide a permanent solution to the smell.

Sekagya was forced to look for a better way of disposing off the waste.

In 2003, when Sekagya went to the different parts of the world, he learnt about biogas that utilises animal waste to produce energy. 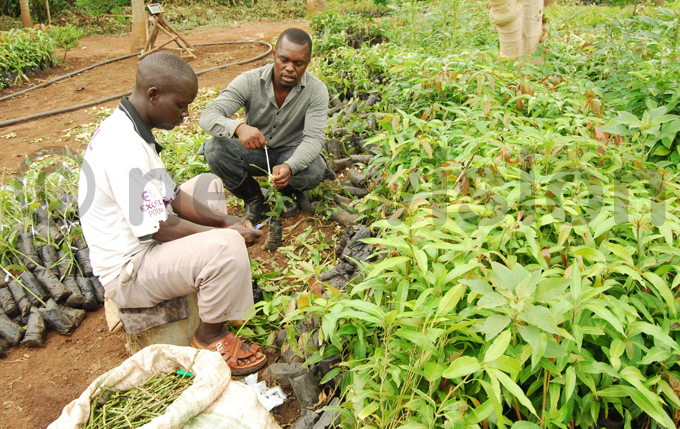 The seedling business is one that Sekagya reaps big from. Photo by Umar Nasubuga

He bought the idea of biogas and using sh2.4m off his savings, he hired the services of an institute to construct him a biogas unit. The unit now consumes most of the animal waste at Sekagya's home and the smell is now history.

His home has now become a model farm and it's flocked by farmers from different parts of the district to learn about biogas and farming carried out at home. Apart from biogas, Sekagya learnt that there are some chemicals that can be used to keep off the bad smell from animals.

He has also found a way of dealing with the tsetse flies which spread sleeping sickness and trypanosomiasis in animals and the other dangerous insects.

Domestic animals also attract jiggers, but Sekagya has stopped worrying about any type of insects. He sprays his animals every week.

"Farmers are required to spray once in 14 days but I spray every after seven days and I have chased away all the dangerous insects," he says.

The other problem of raring animals at home is that people end up failing to find time for themselves. He confesses that he sometimes works throughout the day.

"But that is not a big problem since I am earning a living in return."

Many people in Uganda who rare birds sometimes share houses with them but Stephen Nyanzi a health inspector in Kayunga district says people keeping animals in their houses or close are in danger of contracting diseases from them.

Nyanzi said animals like cows should be kept 100 meters away from the main house while the birds which need heat should at least be 10 metres away. ​

Nandala not f it to run FDC, says Ogwal.

Muntu is not a mole - Nandala camp