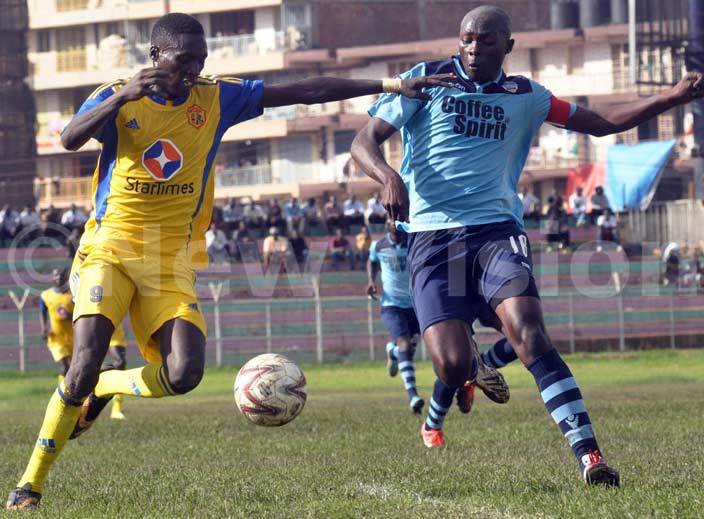 PIC: KCCA playing against The Saints in an earlier game

KCCA FC coach Mike Mutebi has cautioned his players, saying they need to put up an extra performance if they want to defend the league they won last season.

Mutebi made the remarks ahead of KCCA's league opener against Maroons today at StarTimes stadium,Lugogo.

"We must defend the league: That's our ultimate target as a club, and that means being better than we were last season. I believe in the team. I have a well-balanced side in all departments. We just need to find our rhythm and maintain that," stated Mutebi.

Despite the departure of their lead striker, Geoffrey Sserunkuma, Mutebi believes that  Derrick Nsibambi, plus other new strikers such as Samuel Ssekamatte, Patrick Kaddu, Faisam Malango, Abubakar Sadiq Tinjani and Tito Okell,o will create more scoring opportunities for the club.

"Our team has never shied away from creating goal scoring chances. We need enough options in front of goal to bury them. Last season, we scored a total of 56 goals, we must better that this term," he added.

In today's tie, KCCA FC will be  boosted by the return of goalkeeper  Benjamin Ochan, defender Isaac Muleme, midfielder Muzamir Mutyaba and striker Nsibambi who have been away with the Cranes team.

Elsewhere, SC Villa will kick off their campaign with Soana at Masaka Recreation grounds, while Bright Stars, who yesterday unveiled a partnership with Japan's Soltilo Familia Soccer School, will face Vipers at Champion stadium in Mwererwe,Matugga.

New entrants Mbarara City travel to Jinja to take on BUL at Kakindu stadium, while Masavu will face Proline at Fisheries Training Institute in Entebbe.

In Arua, Onduparaka will play Proline at the Greenlight stadium. Meanwhile the league will resume with two games tomorrow. Express will host Kirinya Jinja SS at Wankulukuku stadium, while URA will play UPDF FC at Mandela National Stadium, Namboole.