Nine charged over murdered women in Katabi
Next Story

Nakivubo Stadium will be ready in 2019 - Bakkabulindi

The State Minister for Sports, Charles Bakkabulindi has said that the redevelopment of Nakivubo War Memorial Stadium is on course and assured the public that the facility will be ready for use by 2019.

He said that despite criticism from a cross section of the public, government working under what he termed "public-private partnership" had gone through the required procedures including having the architectural plan approved by Kampala Capital City Authority (KCCA).

The minister defended the developer, Hamis Kiggundu of Ham Towers Limited, for his decision to construct and finish the shops before completing the stadium, saying this was done to enable him (Kiggundu) start recovering the money invested and pay back the loan he obtained from the bank.

Bakabulindi was Friday speaking at a press conference at Nakivubo Stadium where he led Vice President Edward Kiwanuka Ssekandi on a tour of the construction works of the sports complex. In his brief to Ssekandi, Bakkabulindi said that Cabinet and Parliament had discussed and passed the plan to re-develop the stadium and asked the public to stop looking at the project as a "one man's show".

Bakkabulindi said he was happy with the contractor for ensuring that there will be no more flooding at the stadium once completed, after he saw construction where the workers dug seven meters deep to lay a firm foundation to drain the area and divert water into Nakivubo Channel.

He also said he was happy with the inclusion of an underground parking facility, which he said had been misinterpreted by a cross-section of the public as spoiling the stadium.

Kiggundu told Ssekandi that he initially invested $49m to redevelop the facility, which includes installing modern television screens, chairs and floodlights among other facilities but the budget might go higher because of the adjustments in the amenities he had opted to add and altered to add modern facilities. 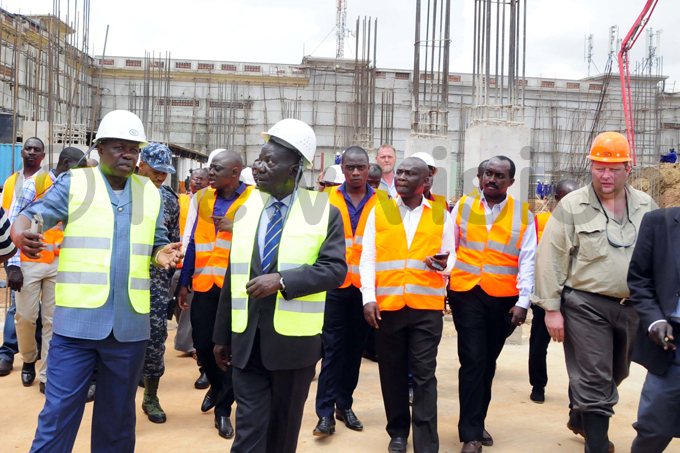 He said he hopes the contractors, Roko Construction Company, will be able to handover the completed stadium within three years.

Kiggundu however said he was heartbroken because of the negative criticism from MPs and other politicians towards the project.

"I have invested a lot of money and my youthful energy in this project, I started from scratch but now I'm able to run this project, which employs between 8,000 to 10,000 youth. It would be justifiable for Parliament, Government and the public to support me. I do not need any financial support from government, all what I need is political support," he said.

Aine Ashaba, the ROKO company project manager said that after three and half months, they had completed 90% of the foundation work and expect to finish the project within three years.

He said it would have facilities like indoor and outdoor games, volley ball and tennis courts, boxing and gym facilities, roof pavilion, health club and others. The stadium will have a sitting capacity of 35,000. Photo by Eddie Ssejjoba

The chairman, board of trustees Charles Egou said the construction of the stadium was following what Cabinet had approved, although the project has been marred by political interference, for what he termed as ‘selfish interests'.

"As a board we promised the country that we were going to construct one of the best stadiums in East Africa, with a modern architectural design, we want to assure you that we are going to deliver as per our promise because of the full government support", he explained.

Ssekandi said that he was conversant with what Nakivubo Stadium used to be since he used to go to the stadium during his school days in the 1960s.

"Since then I have been a great lover of sports and games," he said.

Request for proposal from UNCDF