The pageant was started in 2014 to fight stigma and discrimination amongt young people living with HIV.

PIC: Judges at the Miss and Mr. Y+ pageant. The pageant was started in 2014 to fight stigma among young people living with HIV (Elvis Basudde)

The search for regional representatives in the Miss Y+ and Mr. Y+ (young HIV positive) Beauty Pageant auditions ended Sunday in central region at Bukuma,  in Luwero district. This was the last regional audition that attracted a record turn up of 75 contestants.

In August and July, there were auditions in Arua in West Nile region, Kamwenge in western region, Mbale in eastern Uganda and in Luwero for central region.

The judges were particularly impressed by the enthusiastic, gifted and intelligent contestants during the question and answer session. Their stage presence charmed many. Four contestants were later selected from a pool of contestants from different organisations, such as Mildmay Uganda, TASO, Bailer Uganda, Uganda Cares, Joint Clinical Reserch Centre (UJCRC) and Reachout Mbuya. Others came as individuals. 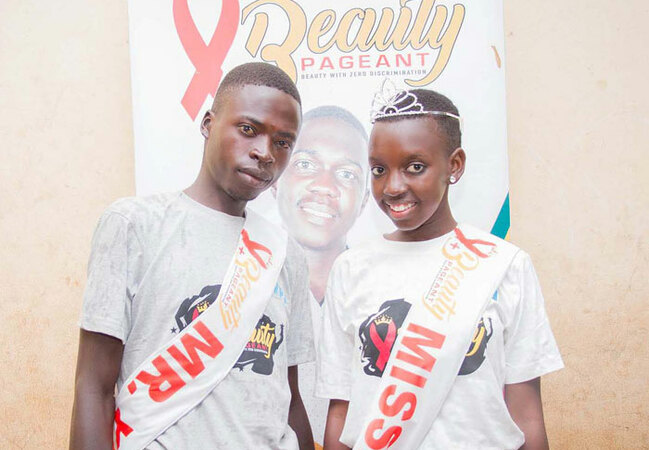 Kyobutungi,15, from Mildmay Uganda, is a Senior Two.  She became emotional and almost shed tears after she was announced as the winner.

She said she was born with HIV and lost one of her parents to AIDS. Kyobutungi said she took part in the pageant to  help her peers come out of stigma, as it has not been easy for her.

"I believe I can transform lives, especially of the young people living with HIV, by showing them that they can be stigma free. I went through a similar thing in the past: I was stigmatised by my fellow students in school," she said.

Mr Y+ Kizito Katumba, 23, comes from the ghettos in Kasana trading centre and gets his medicine from Luwero Health Centre IV. He earns his living as  a by cycle bodaboda rider. He said the reason he took part in this beauty pageant was to sensitise his fellow ghetto people, whom he refers to as " bayaye," on HIV/AIDS.

"I had AIDS and fell critically sick. I tested the grave after being admitted in the hospital for three months. After a near-death experience, I came out to sensitise my fellow bayaye. I do not want anybody to go through what I went through," he said.

Katumba said now that he has won Mr. Y+ beauty pageant central region, heis going to dedicate all his energy and time in sensitising his fellow young people about HIV and encourage them to test for the virus and start early treatment.

" We want ambassadors  who can speak, who have information on issues affecting young people, young people whom we can mentor and can drive the theme of "zero stigma" to greater heights," stressed Jacqueline  Alesi, the executive director of UNYPA. She was one of the judges. 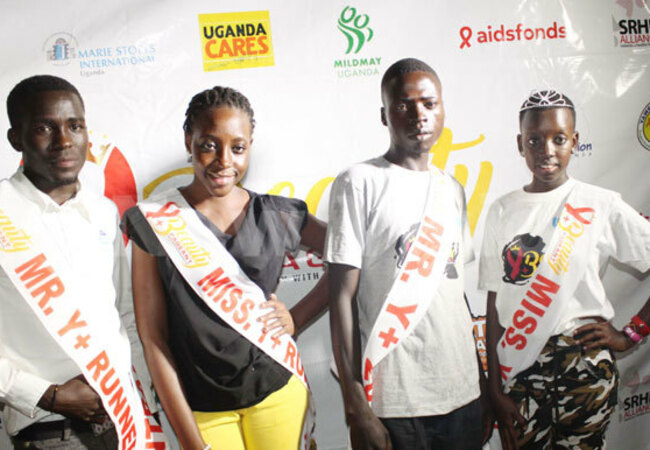 The runners-up were Miss Flavia Alina Kilingomba, 16, and Godfrey Obua, 22, respectively. Nalugoba is pursuing a course in fashion and design and promises to reach out to fellow youth that are HIV positive to encourage them to live a positive and productive life in spite of the fact that they have the HIV virus. Obua is an actor and he is celebrating 10 years of positive living.

Alesi said they launched the Miss Y+ and Mr. Y+ (young HIV positive) Beauty Pageant in 2014 with the purpose to fight stigma and discrimination among young people living with HIV.