BRICS to support to developing countries

PIC: Chinese President Xi Jinping delivers a speech ahead of the signing ceremony of the BRICS business council at the Summit in Xiamen on September 4, 2017.(AFP)

Chinese president Xi Jinping has called for redoubling of efforts to deepen co-operation among BRICS countries.

BRICS is a grouping of emerging economies founded 10 years ago. The bloc's member countries are Brazil, Russia, India, China and South Africa.

Xi made the remarks while opening this year's summit plenary session in China's southeastern coastal city of Xiamen on Monday. He called on BRICS countries to work together to usher in a second "golden decade" of co-operation.

While addressing the leaders of member states and their delegations, Xi said BRICS has traversed a great journey and remains committed to a win-win co-operation to push forward economic, political and cultural co-operation based on the bloc's spirit of openness, inclusiveness and mutual benefit.

He said BRICS has given developing countries a chance to advance their development agenda.

Zuma applauded the New Development Bank (NDB), a multilateral financial institution founded by  BRICS countries in 2014. He urged NDB to me "more welcoming to emerging and developing markets and to Africa in particular".

"We look forward to seeing progress in the funding of infrastructure investment in energy, transport, water and other productive sectors, which currently impedes our competitiveness in the broader global landscape", Zuma said. 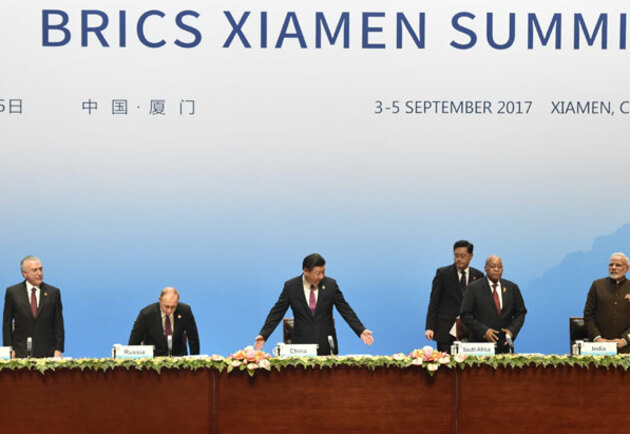 South Africa is the only African country in the bloc.

Zuma called for equitable trade among BRICS countries. South Africa's economy is the smallest in the grouping. Its GDP stands at $325b. China is biggest at $11tr.

The South African leader said his government has increased focus on industrialisation, mining, agriculture, agro-processing and energy, as well as small, medium and micro enterprises.

BRICS countries account for 40% of the world's population and are responsible for 23% of global GDP.

Chinese president Xi Jinping also called for a sharper focus on structural reforms and sustainable development for BRICS economies. He called on member states to champion multilateralism, world peace and globalisation and to defend free trade.

The leaders of Thailand, Guinea, Egypt, Tajikistan and Mexico also graced this year's summit in an arrangement the Chinese foreign affairs ministry termed as BRICS Plus.

Special Report:Why land conflicts are on the rise in Karamoja

Special Report:Why land conflicts are on the rise in Karamoja...