The matchups that will decide Uganda vs Egypt
Next Story

Emmanuel Okwi's goal helps Uganda Cranes to a crucial victory over the Pharaohs of Egypt in a race for a spot in next year's World Cup.

Emmanuel Okwi's goal helps Uganda Cranes to a crucial victory over the Pharaohs of Egypt in a race for a spot in next year's World Cup.

PIC: Okwi (shirt 7) scored the only goal of the game. (All photos taken by Mpalanyi Ssentongo)

KAMPALA - Emmanuel Okwi scored arguably the most important goal of his career as Uganda beat Egypt in a crucial round three 2018 World Cup qualifier at Mandela National Stadium to leapfrog The Pharaohs and settle at the top of Group E.

The winger showed great footwork and composure shortly after the interval to strike home the winner.

The Egyptians stepped up the pressure thereafter, but the home side held on for an important victory, as well as an invaluable three points, on home soil.

This was a game that had been keenly marked as a potential game changer of a group that also features Ghana and Congo Brazzaville, who play on Friday.

From Uganda's point of view, Thursday's clash was a make-or-break tie of sorts. Lose, and the chances of eventual qualification for Russia are massively reduced. But win, and you climb to the summit of the log and stand a fairly good chance of making it through in the end.

Cranes Coach Moses Basena's boys clearly chose the winning script, and executed it in such valiant fashion against one of Africa's finest sides. 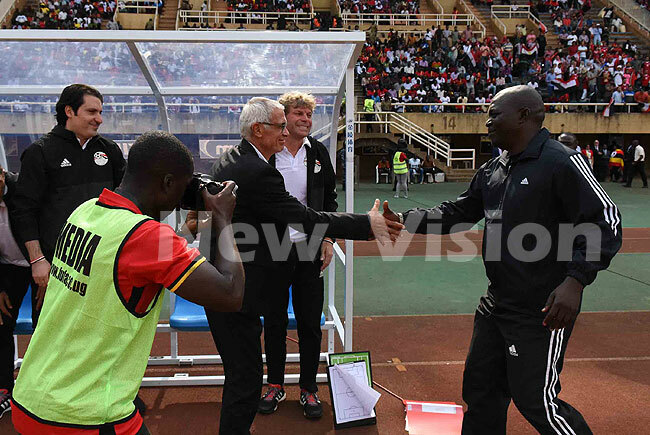 Shaky start but quick into rythym

Coming into this game, one player that would always be the man to watch was Egypt's Mohamed Salah, who plays for English Premier League side Liverpool FC.

The bearded winger's threat was immediately felt when he forced Isaac Isinde into Mauritanian referee Ali Lemghaifry's book in the first minute of the game after the Ugandan defender shoved him mid-flight. 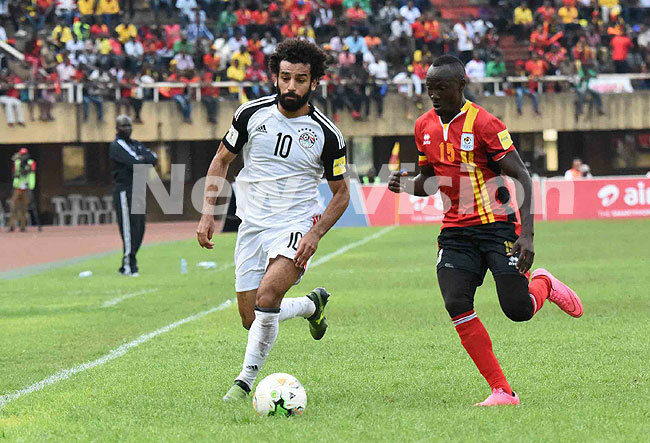 Two minutes later, there was a brief moment of concern for the home side as Farouk Miya stayed down in discomfort after clashing with Egypt's Rabia Ramy on the left flank. But the 19-year-old offensive midfielder soon got back up and galloping to clear any further anxiety. It's the man that he collided with that needed more attention.

The first corner of the day went to Egypt in the seventh minute, but it came to nothing following a powerful headed clearance in the box. Uganda's corner that came three minutes later was not any better.

The real moment of the game came in the 12th minute when impressive right winger Okwi drew veteran Egyptian keeper Essam el-Hadary into a save, with what had appeared an intended cross into the box instead veering goalwards.

A series of fine Ugandan play ensued in Egypt's box that ended in the 44-year-old skipper keeper clashing with his defender and needing attention on his knee.

At this point of the game, the hosts were dominating possession, tapping the ball around with confidence and making use of the wings, ever patrolled by Okwi, Joseph Ochaya and Miya. 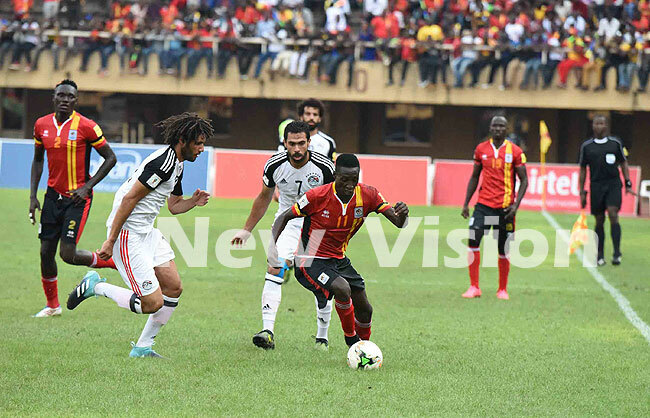 Yet again, there was a moment of home scare just after the half-hour mark as the Ugandan backline was caught offguard, allowing the industrious Salah to scream through, but the already raised flag for offside came as relief for the home side.

On the other end of the pitch, Okwi was giving veteran keeper El-Hadary a busy evening, once again testing him with a well-worked low spinner but the goalstopper, clearly still carrying the effects of his initial clash, scrambled for the save before a lurking Derrick Nsibambi could get to the rebound.

Ten minutes before half-time, the Egyptians thought they had gone in front, but the goal was disallowed for offside after clean work by Salah on the right flank. Meanwhile, Okwi was finding some bit of difficulty escaping the attentions of his lankier minder, Hegazi Ahmed.

With the taller presence in the visitors' defence, not much had been going for Nsibambi. Well, until the 37th minute when Ochaya's well-measured drop-in ball got to him, under pressure, and the KCCA man rose highest to force El-Hadary into another stretch to tip the ball over the bar for a corner.

The visitors again came close to beating Cranes' South Africa-based keeper Denis Onyango but a timely save by Murushid Juuko stopped Bekhit Abdallah's intended intercept from finding a teammate in the area. 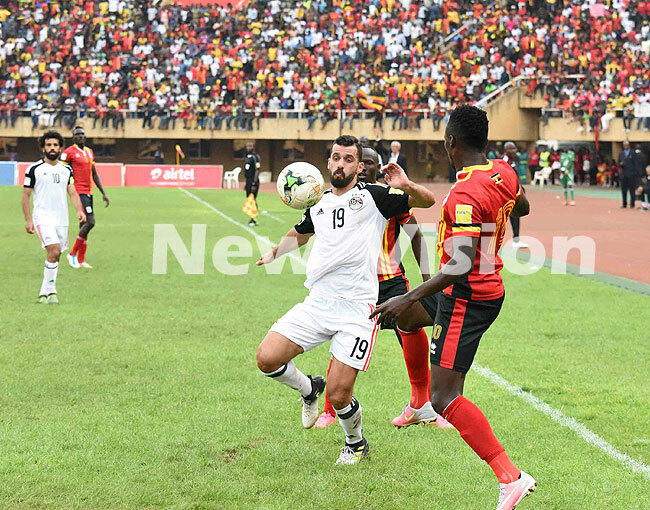 After the opening half that had seen the hosts better their more illustrious opponents in both ball possession (56% v 44%) and in the shots-on-goal department (4 v 1), Héctor Cúper's side returned from the break a much brighter team.

The Argentine refreshed his side with a half-time change, introducing Ahmed Ramadan in place of Hassan Mohmoud.

But he watched his team court with danger, testing the penalty gods early after restart after Ahmed appeared to have bundled Miya in the area after brilliant work by Godfrey Walusimbi. But referee Lemghaifry could not entertain any of the appeals by the hosts. That sparked former Cranes captain Ibrahim Sekagya, called up to Basena's coaching bench, into a fit of rage on the sidelines.

Then Uganda came within just inches of finding the elusive goal in the 49th minute. A quickly taken corner was kept short on the left flank, a swift one-two followed, shot taken but ricocheted off a defender before landing invitingly to Miya, whose fierce effort could only find the side netting.

Two minutes later, with The Pharaohs still under pressure, the turning point of the game arrived. Miya dropped in a ball, which found the head of a Ugandan, before finding the feet of Okwi. The winger was too strong for defender Abouzeid Mohamed. He then dummied his way in deeper to allow himself a better angle before threading home past a host of white shirts.

And the stadium erupted into life! That was six minutes into the second half. 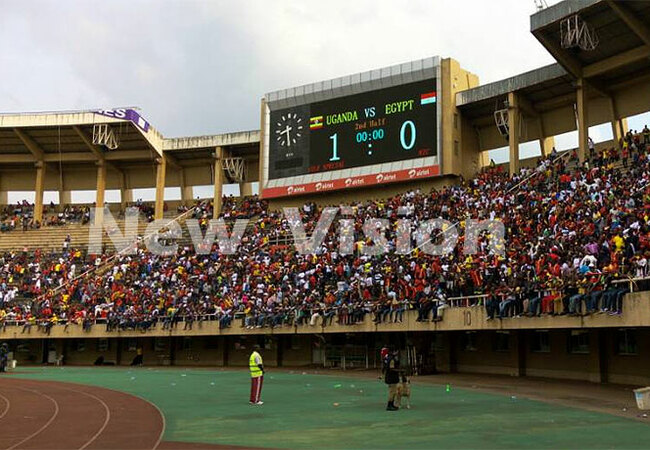 Egypt down but not out

Rather than break them, the goal seemed to have immediately flushed more energy into the experienced visitors. They pushed for a swift equalizer but Basena's side remained resolute.

The Egyptians were in control of the midfield but Salah was not getting the sort of supply that he needed to hurt captain Onyango and co.

Once, Miya came under a heavy challenge from defender Rabia Ramy and this time he needed medical attention. The sight of a stretcher on the pitch rattled the home fans, especially with such a slender lead and with so much time still on the clock.

Egypt's potent in the final third nearly paid off but two fine saves by Mamelodi Sundowns keeper Onyango kept The Cranes' lead intact. First, the lanky goalstopper was tested from a distance by Bekhit Abdallah before Solimon Mohmoud missed a point-blank chance, one that he should have headed home. So close!

Both sides made reforms as the minutes got chalked off. Miya, unable to carry on after his earlier contact, gave way for 23-year-old William Luwagga Kizito with 17 minutes remaining.

Geoffrey Sserunkuuma later replaced goal-scorer Okwi before seven minutes of added time were announced, adding a tinge of anxiety amongst the home crowd. Although Onyango was booked for time-wasting after one of his teammates remained down late on, Uganda held on to bag three points that could potentially see them through to the World Cup for the first time in their history. 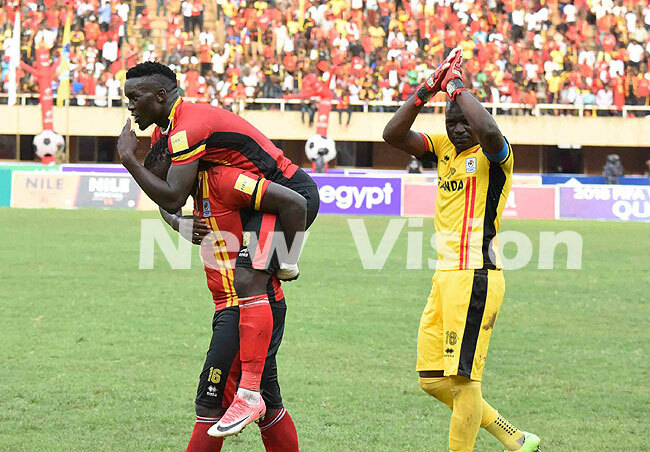 The Uganda Cranes are the only unbeaten side so far in the group and Thursday's victory will also be allowed to sink in with a measure of sweet revenge following Egypt's late win over The Cranes in the Nations Cup finals in Gabon earlier this year. That defeat confirmed Uganda's exit from the tournament.

Can Basena and co muster yet another huge result in Tuesday's return leg in Alexandria?

So far so good for Basena and his coaching team, especially after successfully dealing with the matter of guiding home-based Cranes to the African Nations Championship (CHAN) finals due in Kenya early next year.

Meanwhile, Ghana and Congo face each other on Friday in the other Group E game.

Uganda top the log on seven points, Egypt second on six, Ghana third on one point while Congo is yet to pick up a point. 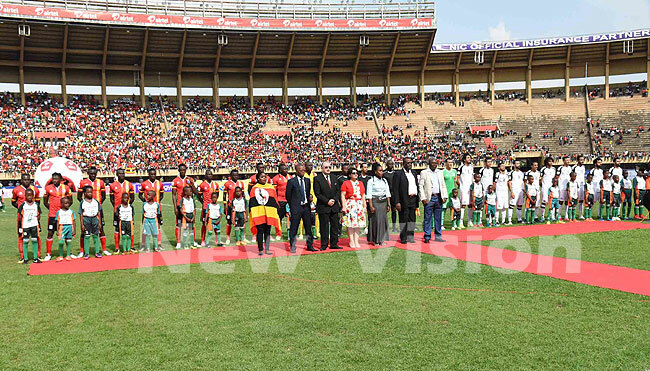 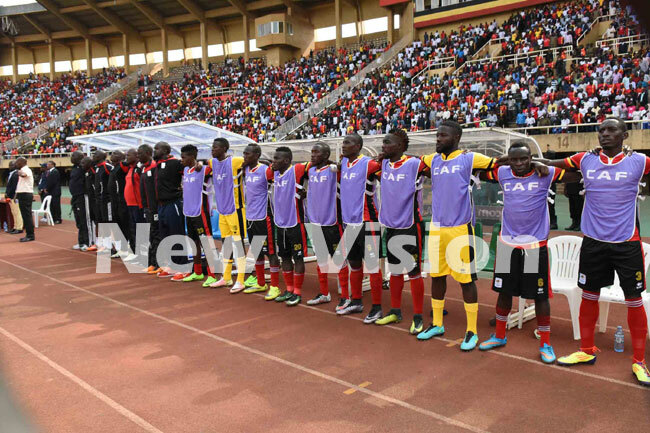 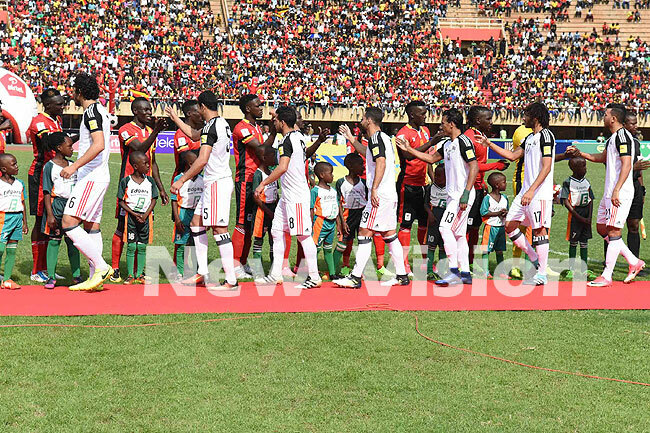 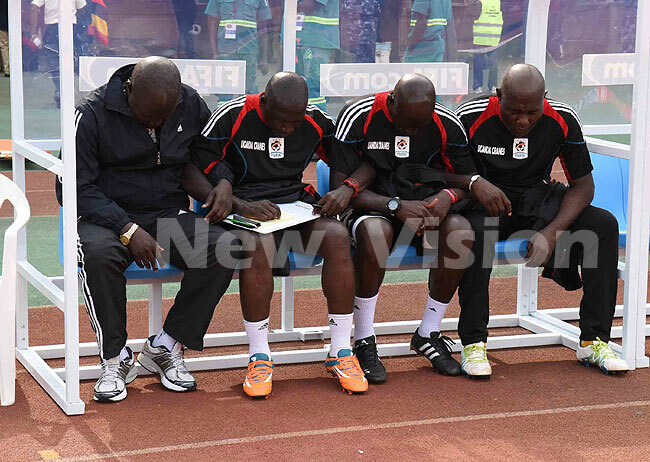 No rallies, no campaigns now - EC