MENU
Wake up to a glass of water
Previous Story

According to the 2016 Uganda Demographic Health Survey report, children born to very young mothers are at increased risk of sickness and death.

According to the 2016 Uganda Demographic Health Survey report, children born to very young mothers are at increased risk of sickness and death.

Nabwire, 13, was admitted at Malango Health Center III in Mayuge district with a high temperature, cough and flu in December last year.

On arrival at the health facility, Nabwire was diagnosed with severe malaria and immediately admitted.

She was given medication and put on drip for further management. In the course of the night her condition worsened as she started bleeding from her private parts.

Unknown to the health workers, the young girl was pregnant and the bleeding was a result of a miscarriage.

With her young age, no one expected her to be carrying a pregnancy, which was about 12 weeks old.

"We were surprised to find her pregnant. Although we always get pregnant teenagers in the health facilities, this was a surprise," says Teddy Tiberimbwaki, a health worker at Malango Health Center.

Along with her aunt, the little girl was later referred to Iganga Hospital for further management.

"But had she been coming for antenatal care, she wouldn't have had the miscarriage," says Tiberimbwaki.

Nabwire's experience is one of the many cases of teenagers who continue getting pregnant in Busoga region and the country at large.

According to Joab Buyinza, the in-charge of Malango Health Center, the situation is worse in Mayuge district.

He explains that about 40% of the mothers who visit the facility are teenagers.

"In Mayuge, the numbers are still very high. Young girls are being impregnated and married off," says Buyinza.

This is no different in Iganga district, where Naisanga got pregnant at the age of 16. She now has a three-month-old baby.

Naisanga has since dropped out of school and is suffering after the man who impregnated her ran away and refused to give her any help during pregnancy and after she gave birth.

"I was left to suffer alone. He deceived me that he will be paying my school fees and helping my grandmother. But he disappeared."

Together with her baby, Naisanga currently stays in Bulamagi village under the care of her aging grandmother who is the sole provider of the family.

She lost all her parents when she was seven years, and for the rest of her life has been under the care of her grandmother.

"I would love to go back to school or at least get some skills to enable me get something where I can get money to help me raise my child," she says.

Another girl, 17-year-old Mutesi, dropped out of school when she got pregnant last year. She has a two-month-old baby. Like Naisanga, the man who impregnated her disappeared and left the young girl suffering.

Mutesi's dream is to become a nurse, but this seems impossible since she dropped out of school and her dad is not ready to give her school fees.

"My father said the money for my school fees has been used to look after the pregnancy and the baby. He told me he is not ready to take me back to school."

Teenage pregnancy in Uganda is on the rise and has become one of the biggest evils plaguing the lives of young girls in the country.

A teenage mother breasfeeds her baby

The Uganda Demographic Health Survey (UDHS) report 2016 shows about 25 per cent (20%) of adolescent women aged 15-19 years were already mothers or pregnant with their first child.

According to the 2016 UDHS report, children born to very young mothers are at increased risk of sickness and death.

Teenage mothers are more likely to experience adverse pregnancy outcomes and are more constrained in their ability to pursue educational opportunities than young women who delay childbearing.

The report indicates that adolescent childbearing is more common in rural than in urban areas (27% versus 19%, respectively).

Moses Kato, the chairperson of Bukatube Male Action Group, explains that the biggest challenge is: men who think marrying young girls and having sex with them would help them not get HIV/AIDS.

"Men here believe that old ladies have HIV and the young ones do not have. That is why they go for them. They also think young girls are submissive and can last in marriage," he adds.

Kato reveals that the community in Busoga believes early marriage is normal because they lack information on the dangers of the vice.

Although there has been reported improvement in education, the challenge of teenage pregnancy remains big and has led to high school dropouts.

Mary Awinyo, a teacher at Budada Primary School in Mayuge district, shows the materials they give pupils to make their own sanitary pads

Poverty is another issue leading to high cases of early marriage in Busoga.

"Majority of the parents are poor and sometimes cannot provide for their children. Men take advantage of this to use the young girls," says Kato.

Ignorance about the dangers of early marriage and teenage pregnancy also contribute to the cases.

Mary Awinyo, a teacher at Budada Primary School in Mayuge district, explains how parents have failed to provide scholastic materials and sanitary materials for the young girls.

"Girls end up dropping out of school when they fail to get these things. And when they drop out, the next thing is pregnancy. Men take advantage of them."

She also says that parents sometimes push girls into marriage to get money in form of bride price.

To help girls stay in school, and those out of school have a meaningful life, the United Nations Population Fund (UNFPA) is currently implementing the Better Life for Girls project in Busoga region.

In partnership with Straight Talk Foundation, needy girls in primary schools are getting menstrual hygiene supplies in Mayuge district, while those who are out of school are receiving life skills.

At Budada Primary School, a total of 70 needy girls are being supported.

"These girls would have dropped out of school if we had not provided them with sanitary pads. They are now psychologically prepared and always ready to study. They no longer shy off from school," says Awinyo.

The school has also established a safe place for girls where sanitary towels are kept. The room is also equipped with soap, a basin, a resting mattress, painkillers, emergency uniform, water and information regarding menstruation.

After seeing that the funding by UNFPA would not be sustainable, the school management committee agreed that the school spends some money to buy pads that can be provided to girls especially on emergency occasions.

Gubi Godfrey, the head teacher of the school, reveals that they are training children to make sanitary pads for themselves.

"We train both boys and girls. Menstruation is not only for the girls but the boys too. When they understand it, it makes the girls comfortable," he says.

Hasfa Naigaga, a Primary Six pupil, says she now enjoys playing and being at school because she is sure she won't be embarrassed when in her periods.

"Boys don't laugh at us and we are not worried of spotting our uniforms. I enjoy being at school. I also help girls to understand menstruation."

Lucy Nabwire, a parent from Iganga town, says teachers and other stakeholders need to put emphasis on abstinence or family planning methods for adolescents.

"If we keep pretending that young girls and boys are not engaging in unprotected sex, we are lying to ourselves. All these pregnancies are a result of unprotected sex."

Nabwire says young girls need to be equipped with the necessary sex education so that they protect themselves.

She challenges government to be strict on defilers and arrest them.

"They should do patrols around these areas and arrest men who have impregnated young girls and all those that have married them."

"We are not going to give marriage certificates without establishing the age of the bride," said Nzimba.

Shools have also been linked to health facilities to help girls get sexual reproductive health services in a quick and more convenient way.

A youth day has been gazetted, when adolescents can go and seek services at selected health facilities.

Teenage mothers often times suffer disillusion after dropping out of school and sometimes abandoned by the men who impregnate them.

This has a lot of negative effects on both the mother and the child. Young mothers rarely take their children for immunization and when they are pregnant, they don't go for antenatal checkupl.

"They only show up when ready to give birth and they disappear without coming back to immunize the babies and to be monitored," she says.

The nurse attributes this to stigma from peers and lack of support from families and spouses.

In Bulamagi sub-county, about 25 young mothers are being trained in life-saving skills. In partnership with UNFPA, BRAC Uganda is training over 2,000 girls in Busoga region. 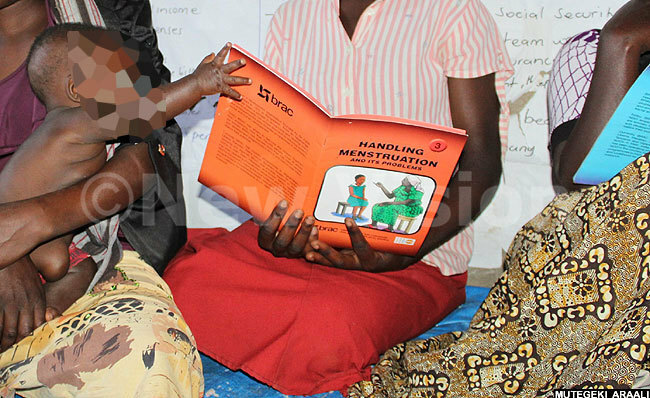 Margret Namukuwe, the assistant project coordinator, says the project targets out-of-school young girls between the age of 10 and 19.

"They are very many, the numbers are overwhelming but we are doing what we can to help these girls have a meaningful life in the future."

She adds that by equipping the mothers, this automatically translates to the wellbeing of the child.

The girls are equipped with skills in financial literacy, HIV/AIDS, family planning, vocational studies like tailoring, hair plaiting, among others.

"We try to bring back their hope. Some have been rejected by their families, and some parents are so abusive to them. So we are making them believe that life can still be useful to them," says Namukuwe.

There is also capacity building for health workers in the provision of adolescent-friendly, age-appropriate sexual reproductive health information and services for adolescent girls.

The Best Life for Girls project is expected to end late next year, having started in October 2016.