Main and last branches of Nakumatt shut down

KAMPALA - The main branch and head office of the struggling 24-hour Nakumatt Supermarket in Uganda has been shut down.

At least 600 employees working for the company have been left jobless with salary arrears.

Uganda Revenue Authority (URA) staff, in an operation, hammered the last nail into the coffin of the few outlets that were still operating over the weekend over tax arrears.

Nakumatt, a Kenyan supermarket chain, started operations in Uganda in June 2009, pioneering the 24-hour concept, which was warmly welcomed by Ugandans.

The company however started facing management challenges and other challenges which included a difficult economy that has brought it to its knees.

A URA official told the media the supermarket has unpaid taxes adding to over sh300m. Patience Tumusiime Rubagumya said if the company could make part payments, they were willing to let them resume operations.

"Office/premises temporarily sealed off by Uganda Revenue Authority for failure to comply with tax obligations," read a notice posted by URA on the last branches. 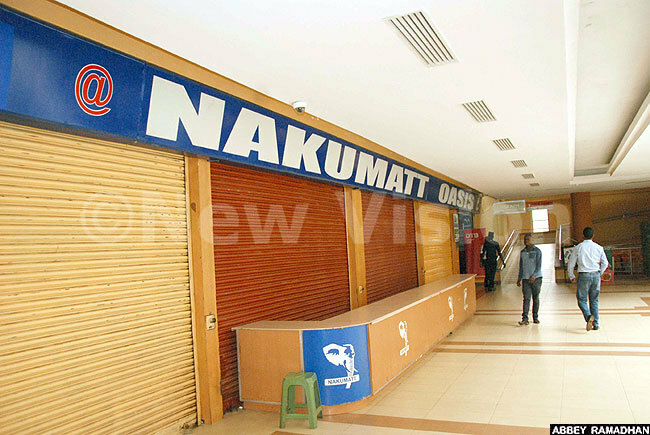 Nakumatt is also hounded by many lawsuits from suppliers and creditors totaling to over sh5.2b.

A lady who normally buys bread at the Bugolobi branch in Kampala expressed shocked on seeing huge padlocks on the door. The Bugolobi one was one of the few limping branches, which was expected to keep the outlet struggling on.

The head office at Kumambogo Gayaza and the main branch Oasis Building have been sealed off as URA goes into negotiations with the top executives of the company.

Nakumatt had a total of nine branches in Uganda.

Nakumatt Holding managing director Atul Shah said they were planning a recovery of the business both in Kenya and Uganda.

Shah said the company had expected a capital injection but it has not come through.