Disease gene 'edited' in human embryos in ...
Next Story

"It was incredibly beautiful. I am moved to tears," says one of the sky-gazers.

"It was incredibly beautiful. I am moved to tears," says one of the sky-gazers.

Sky-gazers stood transfixed across North America Monday as the Sun vanished behind the Moon in a rare total eclipse that swept the continent coast-to-coast for the first time in nearly a century.

Millions of die-hard eclipse chasers and amateur star watchers alike converged in cities along the path of totality, a 70-mile (113-kilometer) wide swath cutting through 14 US states, where the Moon briefly blocked out all light from the Sun.

"It was incredibly beautiful. I am moved to tears," said Heather Riser, a 54-year-old librarian from Virginia, sitting on a blanket in Charleston's grassy Waterfront Park where thousands had gathered to watch.

Festivals, rooftop parties, weddings, camping trips and astronomy meet-ups were held nationwide for what was likely most heavily photographed and documented eclipse in modern times, thanks to the era of social media.

The blackest part of the shadow, known as totality because the Moon blocks all the Sun's light from the Earth, began over Lincoln Beach, Oregon at 1716 GMT.

Crowds whooped and cheered at the first sign of darkness. 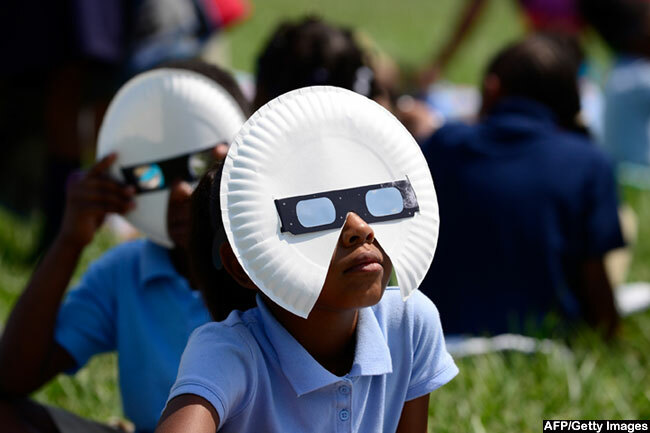 Students at the Jennings School District view the solar eclipse with glasses donated by Mastercard in St Louis, Missouri 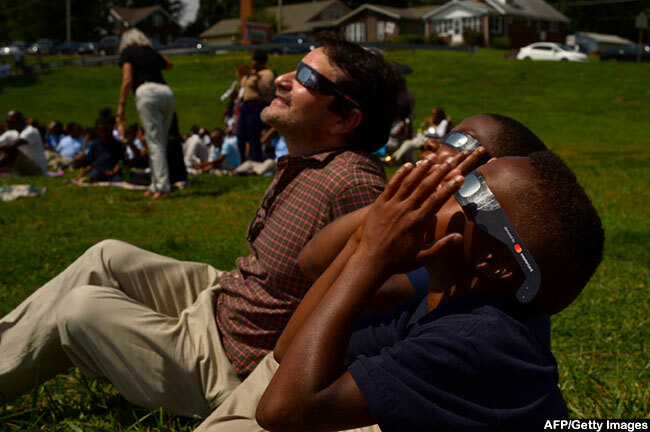 Just inland, more than 100,000 people gathered at Madras, Oregon -- typically a town of 7,000 -- in what experts described as perfect viewing conditions.

"I've wanted to see one of these my whole life, since I've been studying astronomy, since I was a kid," said Christine Sapio, a science professor. "I thought I was prepared for it -- I totally wasn't."

"I was shaking, I was crying. I was just totally taken aback by just how beautiful it was."

In Los Angeles, "oohs and aahs" emanated from the crowd of thousands gathered at the Griffith Observatory in the hills above the city as the partial eclipse began.

Many had hiked to avoid massive traffic jams. Some watchers had fashioned their own pinhole projectors out of cardboard and scotch tape. Others watched while wearing special, dark solar eclipse glasses. 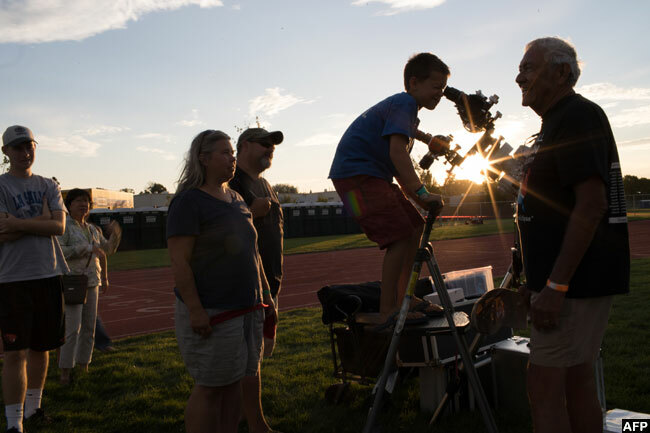 Isaac Ehrenburg, 10, looks through a telescope at the setting sun during pre-eclipse activities at Madras High School in Madras, Oregon

In downtown Charleston, South Carolina, the last point in the path of totality, crowds of tourists -- some in special eclipse T-shirts and star-printed trousers -- staked out prime spots on the bustling city's storied waterfront.

Forecasts of thunderstorms threatened to block the view, but the eclipse managed to peek through the wispy clouds.

Onlookers in Waterfront Park screamed and cheered as the sky went dark in the middle of the afternoon, streetlamps came on, and a rumble of thunder could be heard in the distance.

"The crowd here was very into it," he added, remarking on the diversity and peacefulness of the masses.

"You don't get many chances to experience that." 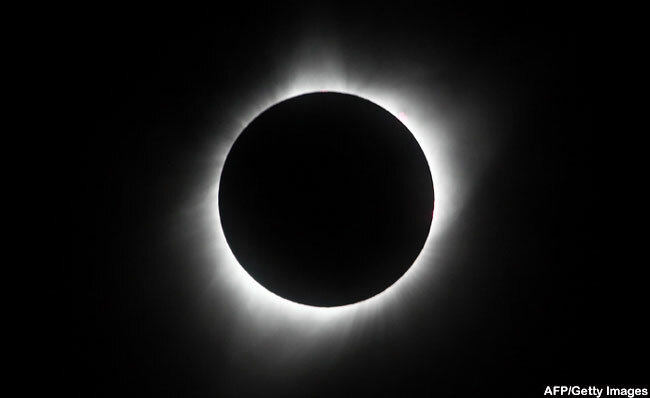 One bar had installed outdoor speakers blasting Bonnie Tyler's mega-hit "Total Eclipse of the Heart" -- which she performed live on a cruise ship sailing through the path of totality.

The unofficial anthem for the celestial show soared to the top of the iTunes charts, outdoing even record-smashing pop song "Despacito."

Cloudy weather and thunderstorms dashed viewers' hopes of seeing the eclipse in some places, including Missouri.

Some of the clearest views were along the West Coast. 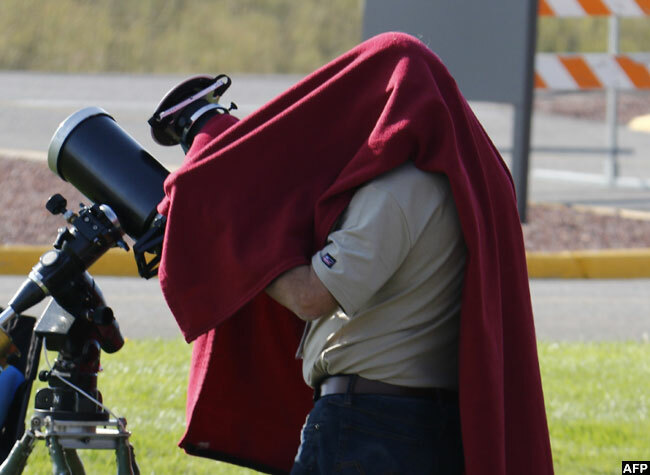 In the US capital, where 81 percent totality occurred, Donald Trump watched the partial eclipse from the White House with his wife Melania and son Barron -- although the president appeared to have missed the memo on eclipse do's and don'ts.

At one point, Trump glanced skyward without protective eyewear -- a big no-no, according to experts. "Don't look," an aide shouted to him. He later donned glasses.

Eclipse watchers also flocked to Washington's National Air and Space Museum, where solar telescopes were set up for the occasion. 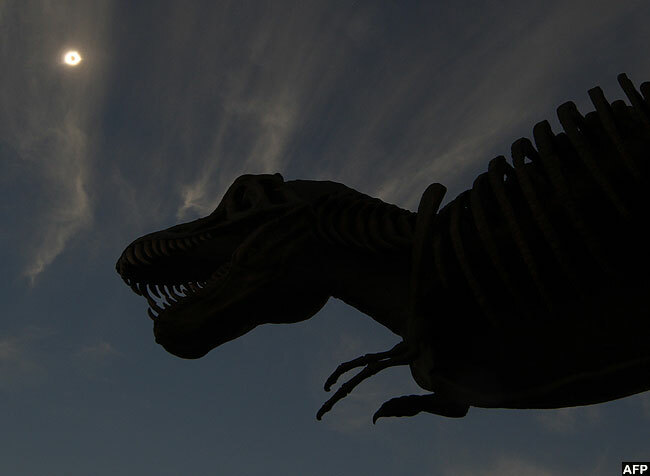 The totality of the Great American Eclipse is seen over a T-Rex statue at Casper, Wyoming 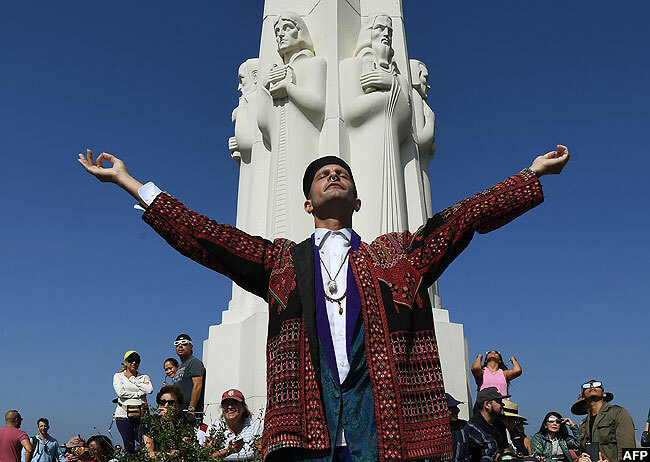 B.J. Dini from the 'Hermitage of the Golden Dawn' movement conducts a ceremony as he views the start of the total solar eclipse at the Griffith Observatory in Los Angeles, California

In Mexico, where there was a partial eclipse, astronomy buffs set up telescopes fitted with special sun filters in parks and squares in various cities.

Eclipse watchers often describe being overcome by emotion as the sky goes black, birds return to their nests and the air chills.

"It is such an incredible, sensory-overload kind of event," eclipse-chaser Fred Espenak, a retired NASA astrophysicist, told AFP of the first total solar eclipse he saw in the United States back in 1970.

Scientists planned to study the eclipse to learn more about the super-hot corona, or outer atmosphere of the Sun.

"It is really exciting to see so many people interested in nature and science and this amazing phenomenon," said Kwayera Davis, an adjunct professor of astronomy at the College of Charleston. 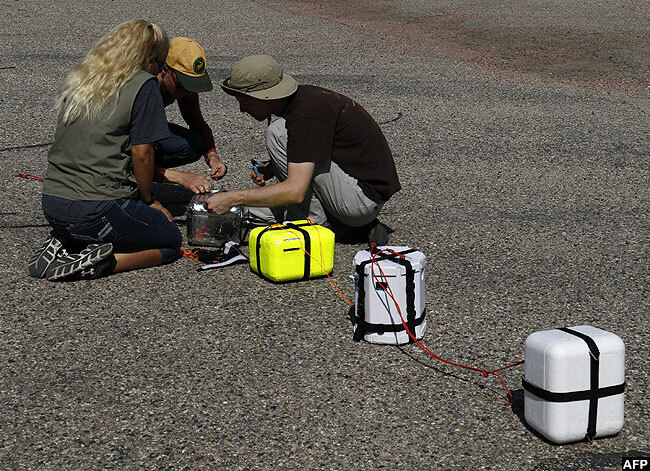 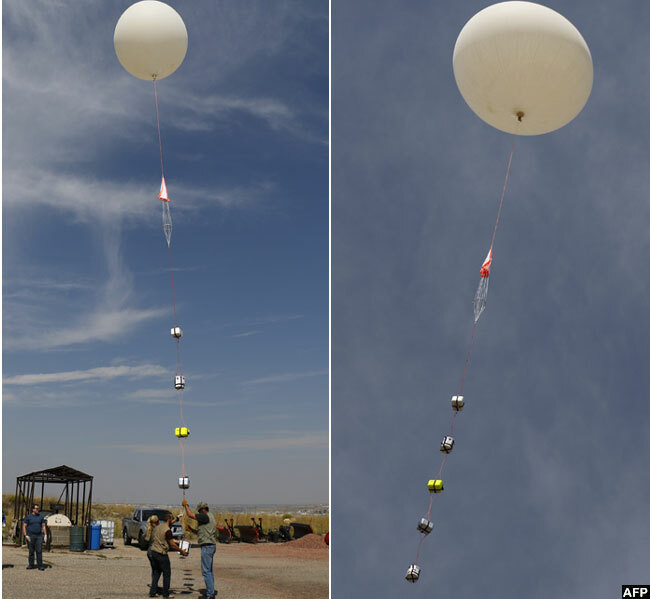 After weeks of turmoil triggered by the race-fueled violence in Charlottesville, Virginia, some commentators welcomed the national feel-good moment afforded by the Great American Eclipse.

"The divided United States of America will unite today, sharing a cosmic event predicted by the methods and tools of science," tweeted the US astrophysicist Neil DeGrasse Tyson -- who earlier advised people to "put down your smartphone and experience this one emotionally, psychologically, physically."

The CEO of Goldman Sachs, Lloyd Blankfein, drew a more somber parallel between the day's spectacle and the country's challenges.

"Wish the moon wasn't the only thing casting a shadow across the country. We got through one, we'll get through the other," he tweeted.