Students flagged off for FEASSA Games
Next Story

"I will be the most desirable prey in the history of chess but nevertheless I will be kicking and fighting to win the contest."

"I will be the most desirable prey in the history of chess but nevertheless I will be kicking and fighting to win the contest."

The world's top chess players were selected to feature in the 2017 Grand Chess Tour (GCT) series that started with the Paris  GCT June 21-25.

Legendary chess player Garry Kasparov is among those in contention and he is batling for top the position at the five-series event that concludes in December with the London Chess Classic.

In the event that the Russian chess star wins the contest, Uganda will be one of the 33 African countries to reap big from his sweat.

Doing a tremendous job in promoting the game of chess across the globe, the chess Grand Master (GM) Kasparov visited Uganda in 2013 to raise awareness regarding the role the game can play as an educational tool.

During his visit, the player inspired many youths including the then Uganda's youngest Candidate Master (CM) and the name behind the "Queen of Katwe," movie; Phiona Mutesi.

He is also remembered to have had an exhibition game with Mutesi earlier that year in the US. 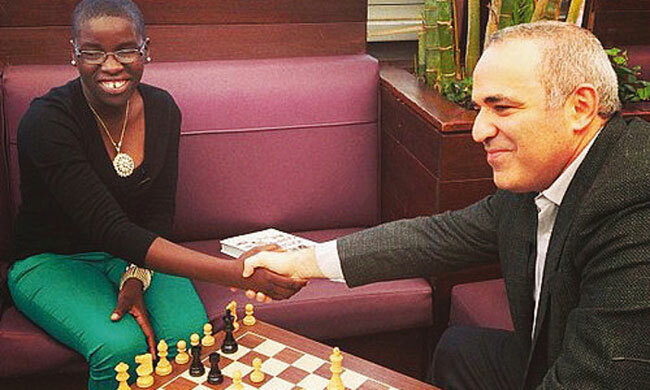 Putting his best bet on winning the Rapid and Blitz tournament in St Louis, Missouri, Kasparov, more motivated by his love of the game than anything, said in his Facebook posts that he would donate any winnings to promote chess in Africa.

"I realize that it's serious. I will be the most desirable prey in the history of chess but nevertheless I will be kicking and fighting to win the contest," he posted.

If the former world's best chess player wins at least one of the five series, he will walk away with$150,000 (sh540m), some of which is expected to go to Africa's FIDE affiliated federations.

But, given the fact that the gray-haired Russian legend will be out to meet with some of the world's top new generation players who have mastered the art of the game after he chose to trade the game for political combat 12 years ago, it remains to be seen whether or not the player will be out to beat his opponents or instead hand over the responsibility to the best candidate.

However basing on his Facebook posting on Sunday, the 54- year old made it clear that the tournament represents not an end to his retirement from chess, but only a five-day break.

"I have no plans to play after this event," he said.

Kasparov is expected to face the now world's chess champion Magnus Carlsen from Norway, and fellow Russian Sergey Karjakin among others.

The 2017 Grand Chess Tour is a series of five chess tournaments held throughout the year and across the globe.

A total of nine players were selected as full 2017 Grand Chess Tour participants with three places awarded to the top finishers in the 2016 GCT, and other  three to the top players by average 2016 rating and the last  three were determined by the GCT advisory board as tour wildcards.

The tour participants will play both classic events and two of the three rapid and blitz events. Unlike last year, every result will count toward a player's final GCT standing.

Nansubuga, Nakabo shine as Kireka make it four in chess...