What meat won't do, beans will
Next Story

What it takes to recover from a stroke

People prone to migraines also have a high risk of suffering stroke.

People prone to migraines also have a high risk of suffering stroke.

Suffering a stroke is something many associate with people of advanced age. But it can happen to anyone regardless of age.

Immaculate Namukasa, 56, a resident of Katande village in Wakiso district, woke up to find that she couldn't move, talk or do anything by herself.

According to Namukasa, she was lying on the floor and had urinated on herself. Her left-hand side was paralysed because she couldn't move or feel it.

Her son, Mike Nsubuga, says his mother's mouth was drooping to the left side of the body. Nsubuga says before his mother suffered the stroke, she had complained of loss of eyesight and a fever.

All Namukasa's children didn't know what their mother was suffering from until they got to the hospital and were told she had suffered a stroke.

Like Namukasa's children, many Ugandans do not know what a stroke is, how it happens or who suffers from it.

Currently, there are no official statistics on stroke. However, Dr. Ibrahim Bukenya, the principal physiotherapist at the Stroke Rehabilitation Centre in Kasangati, says that it is on the increase.

There is no available data to show the extent of the problem in Uganda. But Bukenya says the number of survivors seeking rehabilitation services at the centre and other rehabilitation facilities is growing.

WHO says over the years, there has been global increase in the number of people who suffer strokes, with common risk factors being obesity, diabetes, high blood pressure, high cholesterol in the body, smoking and alcohol abuse.

People prone to migraines also have a high risk of suffering a stroke. Age and genetics are also common predisposing factors for stroke.

Dr. Aisha Akujju, who is based in Gulu, says stroke is an attack which is caused by the interruption of blood flow to the brain.

She says it is an emergency and happens when there is blockage of blood pressure to the brain, or when there is a burst of a blood vessel.

Akujju says in case a person experiences weakness on one side of their face, they should go to the hospital. 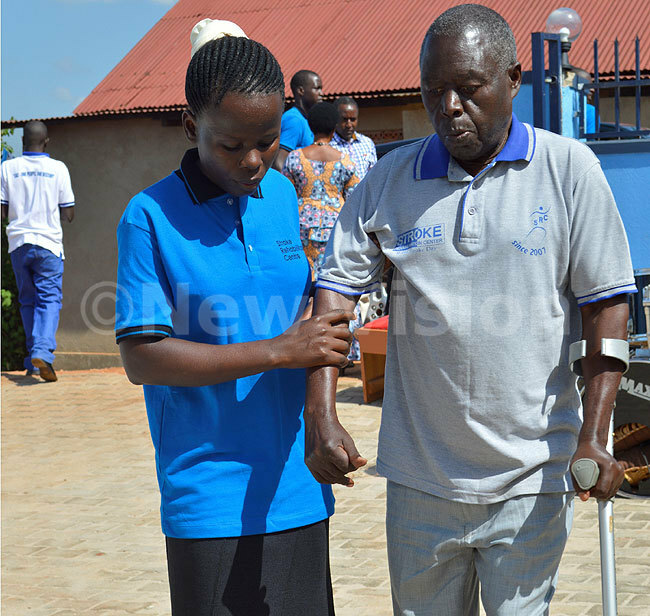 The risks and effects

According to Dr. Bukenya, a stroke can happen to anyone, even children and youth, although it becomes common as people get older.

He says conditions which make a stroke more likely include blood disorders such as severe anaemia and sickle cell disease, obesity among others.

Other risk factors include over consumption of alcohol, abuse of recreational drugs such as cocaine and heroin and lack of physical activities.

Dr. Akujju says many people have had patients with stroke but they don't know what is wrong. They visit different doctors after a long period of their patients suffering and being hidden in the house because they are ashamed of bringing them out to the public.

"Very many think that it is witchcraft, and this is very wrong."

She says lack of awareness about strokes remains one of the biggest challenges in trying to address the problem. "The public needs to be sensitised on how to identify warning signs".

Unlike a heart attack, most strokes are painless.

According to Bukenya, stroke rehabilitation is a comprehensive therapy program that helps stroke survivors to recover lost skills.

"Rehabilitation is an important part of recovery after stroke. It helps a person to re-learn skills they lost when the stroke affected part of their brain and body."

He says stroke affects individuals differently, and the recovery rate also depends on the extent of the damage that a person has suffered.

"That is why it is impossible to tell immediately after a stroke if or when a person will be able to return to the day-to-day life that they lived previously."

Bukenya also says one has to do activities and the activities one is exposed to to restore this independence include self-care skills such as bathing, dressing, grooming, language, toileting, communication skills in speech among others.

"Rehabilitation should start immediately after one's medical condition stabilises and may last from one month up to five years depending on the extent of damage," he adds.

Currently the Stroke Rehabilitation Centre is one of the main rehabilitation centres for stroke survivors and it receives as many as 15 survivors daily.

Mental health experts to testify on Ongwen's state of mind