MENU
With simple irrigation, you can grow crops all year round
Previous Story

Govt to focus on food crops for the region...
Next Story

“As seed producers and traders, we need that information so we can know how much seed should be produced..."

Some of the types of beans that were launched. Photos by Prossy Nandudu

“As seed producers and traders, we need that information so we can know how much seed should be produced..."

Lack of proper statics on the production of food crops like beans will cost the country a lot of foreign incomes. This is because most of the beans are traded informally and these mostly go to neighbouring countries of Kenya, Tanzania DR.Congo and S.Sudan.

The observation was made by Richard Masagazi, the proprietor of Pearl Seeds Company on the side-line of the launch of high Iron and Zinc rich beans at the National Crop Resources Research Institute (NaCRRI) at Namulonge on Wednesday.

"Such volumes should be documented to help seed multipliers and traders of the commodity to know the actual demand and position themselves better," said Richard Masagazi, the proprietor of Pearl Seeds Company.

For such information to be collected, Masagazi suggests that the statistics department of the ministry of agriculture, Uganda Bureau of Statistics and Uganda Revenue Authority, should take the lead and collect this kind of data. 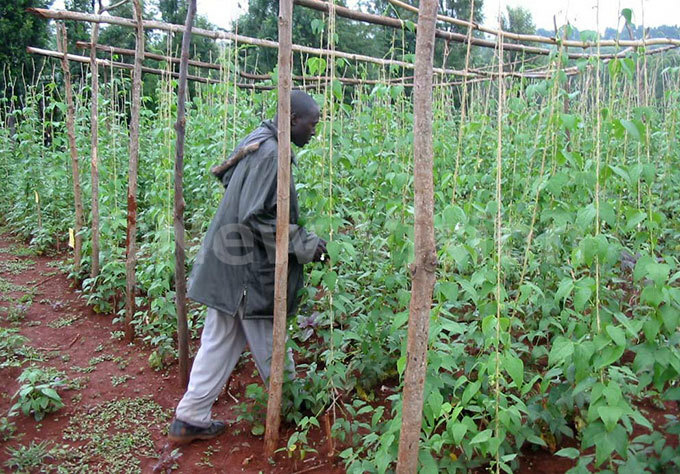 A farmer in Kween district checking his climbing beans

"As seed producers and traders, we need that information so we can know how much seed should be produced, available demand, which markets to help us in planning what kind of investment should be set aside," he said.

While launching the beans, the head of bean program at NaCRRI, Dr.Stanley Nkalubo said the beans include NARO bean 1,2, 3 and 4c and 5c, both bush and climbing beans. Bush beans grow without support while climbing beans need support and these mainly grow in the highland areas.

He said they choose to work on beans because they are widely consumed but what is being consumed has less iron and zinc which are essential for body growth, he explained.

"The beans are early maturing, therefore can escape some of the harsh weather conditions like drought but plans are underway to breed beans that are tolerant to drought,"added Dr.Titus Alicai, the head of the root crops program at NaCRRI.