Even their mother sometimes finds difficulty in telling them apart.

Even their mother sometimes finds difficulty in telling them apart.

On August 20, Sunday Vision will hold a festival for twins dubbed Kampala Twins Festival at Kyadondo Rugby in Kampala. Ahead of that much anticipated day, we will publish stories on twins.

Today, we bring you the story of Peter Wasswa and Paul Kato, a pair of identical twins who both studied mechanical engineering and have chosen to stay together and plan to marry on the same day.

The 24-year-old siblings share a strong bond. They stay together in Mutundwe, a Kampala suburb, and plan to hold their respective introduction and wedding ceremonies on their birthday.

Reason? They consider consider it special and always want to hold such important functions on that day (birthday).

"We have grown up together, doing everything together and that is why we decided to stay together," says the rather outspoken Wasswa. 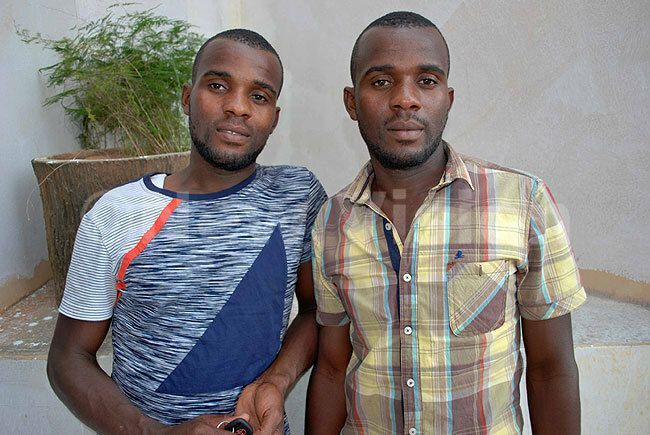 Their wish was to marry women from the same family, preferably sisters. But Wasswa regrets that that plan did not work out as his wife-to-be is the only girl in her family.

Nethertheless, Kato managed to get engaged to a friend of Wasswa's fiancee, who is also her workmate.

Their striking resemblance has made it difficult for people to tell them apart since their childhood except for those who interact with them regularly.

For instance, Kato says their girlfriends have had a rough time telling them apart, especially in the first days but later they got used.

They are so identical that even their mother sometimes gets confused when it is dark or when they appear in similar clothes.

Kato says he always emulates his brother Wasswa whom he describes as humble, respectful and decent.

Aside, Wasswa says Kato always gives him a fallback position. When he does not have money, he comes to his rescue.

Has Big Brother turned into a Nigerian do?

Time to vote out the Nigeriaâ€™s Nkenna

Time to vote out the Nigeriaâ€™s Nkenna