Kenya on a knife edge ahead of high-stakes...
Next Story

The forum is an important mechanism for information sharing and cooperation.

The forum is an important mechanism for information sharing and cooperation.

Uganda last week hosted a meeting of representatives from the different federal states and regions within Somalia to enhance maritime security in the Indian Ocean.

The meeting, which took place at the Best Western Premier Garden Hotel in Entebbe, was convened by the Maritime Security Coordination Committee (MSCC) and the Inter-governmental Authority on Development (IGAD) with representation from regional member states.

MSCC is the Somali instrument that facilitates co-operation and maritime security development between the federal states of Somalia.

The forum is an important mechanism for information sharing and cooperation to optimize the implementation of counter-piracy and maritime security capacity-building programmes. It identifies gaps and improves efficiencies in the maritime sector. The meeting, which involved regional representatives, was attended by executive directors and directors from Jubbaland, South West state, Puntland, Galmudug and Hir-shabelle.

The director of peace and security at IGAD, Ambassador Tewolde G. Redda, said he expects the organization to make progress in achieving its objectives, especially after elections were held in Somalia. He further congratulated the new Federal government of president Mohamed Abdullahi Mohamed (Farmajo).

"We pledge to continue supporting the MSCC throughout 2018 and strengthen the linkages between the regional states and federal through the MSCC mechanisms that are currently operational," said Tewolde.

Dr. Abdirahman Mohamed Abdi Hashi, the minister of fisheries and marine resources and chair of the council of ministers of Somalia, said the economic devastation from the impact of the widely prevalent illegal unreported and unregulated fishing is an issue of great concern to most Somalis.

"On my way to Entebbe, I read a story that the major threat to the Somalia maritime coast is not piracy but the smuggling of people and weapons.

"The recent massacre of women, children and the security forces of Puntland by Al-Shabaab and its affiliated groups is a stark reminder to the delegates of this conference of the importance of strengthening Somalia's maritime security in all areas," said Abdirahman.

He added that in the recent past, the Somali government has seized a Thai fishing vessel with support from the Thai authorities. The vessel was carrying 448 metric tonnes of fish. 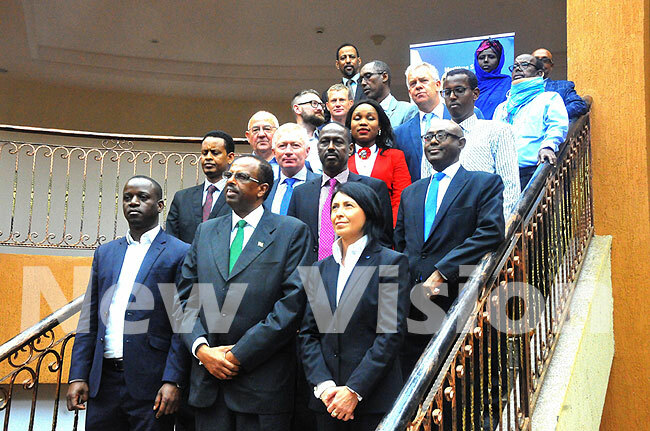 According to Abdi Ali Raghe, the MSCC focal officer, there is an alternative livelihoods programme through vocational development initiatives and advocacy against piracy co-ordinated by IGAD, where Uganda is a member.

The East African Community is also leading national, regional, legal, legislative and infrastructural capabilities for the arrest, transfer, detention and prosecution of pirates.

Uganda will host a regional forensics identification system that will be used both for training and referral ballistics examinations. Benchmarks visits involving 30 officers have been undertaken in Uganda, Kenya and Tanzania.

According to Abdirahman, the new federal government in Somalia has a new initiative of transferring prisoners to several countries in the region, including Uganda, especially those engaged in piracy.

At the end of the meeting, MSCC took note of the progress the Somali stakeholders have made in the past one year and said new donors, including Turkey, UAE, UK, Australia, Norway, Denmark, The Netherlands, USA, Japan, Qatar and Saudi Arabia are coming on board to assist in the development and stabilization of Somalia in the maritime sector.

The MSCC also welcomed the candid discussions and exchange of views among MSCC members as it reviewed and re-prioritized maritime priorities.

The regional states representatives raised a number of concerns about their level of coordination with the organization.