Cheptegei this time showed rare bravery as he chased Farah.

Cheptegei this time showed rare bravery as he chased Farah.

After a disappointing cross-country show, Uganda's Joshua Cheptegtei made up with silver and a $30,000 (sh108m) prize at the World Championships.

Cheptegei, who saw gold slip through his hands at the World Cross Country in Uganda in March was in much better form on Friday.

He strode to silver before an ecstatic crowd in the men's 10,000 meters won by homeboy Mo Farah in the British capital London.

Cheptegei was in much better form than on that hot cross country afternoon in Kampala when he led only to burn out in the final lap
and finish 30th.

Cheptegei this time showed rare bravery as he chased Farah to the finishing line with Tanui, Karoki and Kamwororo struggling behind. 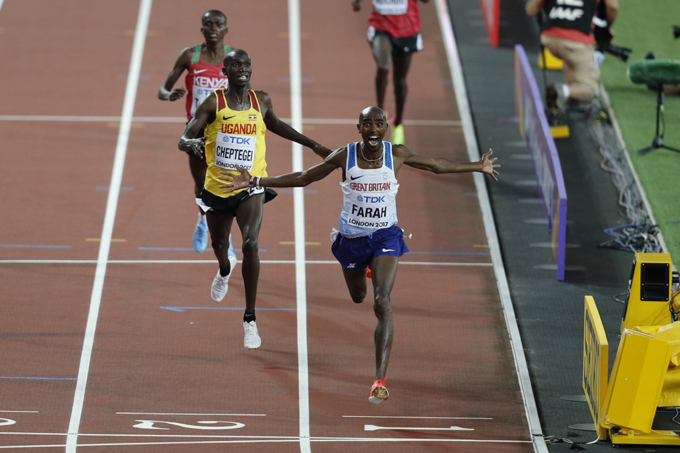 Cheptegei who returns in the 5000m heats on Wednesday just like Farah, could become the first Ugandan to win two medals at the same world championship.

After crossing the finishing line on Friday, Cheptegei, who won gold in the world junior championships in 2014, knelt down and prayed to the almighty.

"Now I feel happy because I have a medal in the senior race. I feel Kampala was just not my day, I was really in shape but it wasn't my
day. In future, I hope it will be good again for me."

He said his preparations in Uganda and Kenya had yielded results.

"The race was a really tough race, you know. I feel like my preparations were enough; my last lap was really poor but I feel like I'm coming good, I just need to do some more training, and I believe in the next edition of these championships it is going to be something different. Cheptegei together with the Kenyans and Ethiopians threw everything at Farah. They alternated in the front pack with the Briton chasing until that decisive point with 800m left when Farah took charge.

"The plan was to run a hard race. The opening lap was not a problem — I thought I was going at 65 (seconds), but I saw it coming at 61 and it was fine.

"I'm not upset about the loss because I am still young. Mo is a great guy and legend, so running with him in the last championship for him is really great."

Returning to the venue where he was first propelled towards stardom at the 2012 Games, the four-time Olympic champion stormed to victory in a time of 26 minutes 49.51 seconds to consolidate his status as Britain's greatest track distance runner.

Friday's gold marks the Farah's sixth title at the World Championships and a third in the 10,000m after victories in Moscow in 2013 and Beijing two years ago.

Farah, who will retire from the track later this month, now turns his attention to Saturday's 5,000m final as he bids to claim one last final gold to cap off what has been a remarkable career.

"It was one of the toughest races of my life," the 34-year-old said afterwards. "The guys gave it to me, it wasn't about Mo, it was about how do we beat Mo?"

Most businesses silent on fraud - report