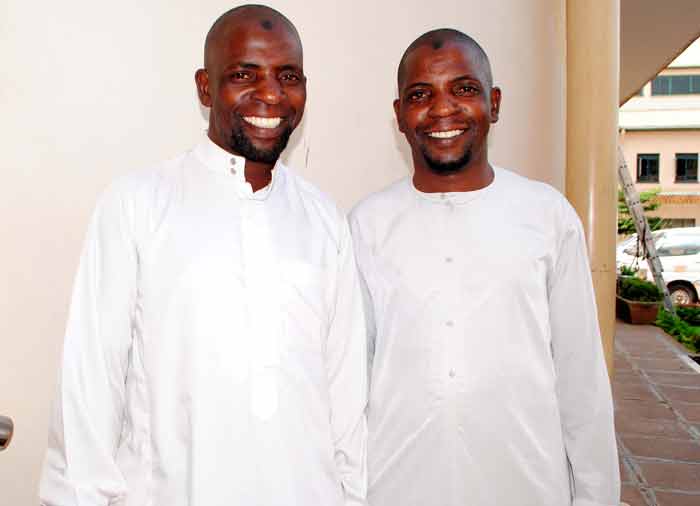 On 20th August, Sunday Vision will hold a twin's festival budded Kampala Twins Festival at Kyadondo Rugby in Kampala. As we prepare for the event, we bring you a story of how the Ssenga's failed to tell apart; Twaha Waswa and Bashir Kato on their introduction ceremonies.

"If we got out of this room and switched clothes can you tell us apart?" is the first question the pair asked when I walked into the room to take their interview. Puzzled by their resemblance, I started looking out for the different features in vain!

The pair has prayer marks on their foreheads, same beard shape; short goatee and both talk in a husky voice. It is such similarity that caused confusion on their introduction ceremonies to the point that their Ssengas (aunties) to their wives failed to tell them apart as they narrate their experience.

"Ssenga had never met us so when the time came to identify and put a flower on my coat, she failed to identify me because I was sitting with Waswa who was my best man," Kato vividly recalls and says after her effort turned futile she whispered asking them to help her identify the groom.

Mwajuma Namutebi, Kato's wife also confessed that when it got dark and after the groom (her husband) and best man changed, it took her time to identify her husband because of the resemblance.

The story was not any different on Waswa's introduction ceremony. This time round the Ssenga; totally got confused and instead held their hands beckoning them to the front seat reserved for the bride, explains Kato amidst laughter.

According to the twins, they have lost count of moments when people have mistaken them for the another. But what perplexes them is how their own mother and wives sometimes fail to tell them apart because they have similar husky voices.

It has taken our mother forever to tell apart our voices. As a result, she has learnt to cope by avoiding calling our names, says Waswa. For instance, when she hears one of us talk from the living room and she happens to be in the bedroom, she avoids calling names and asks, who is there? Waswa says and also cites that on several occasions his bothers wife has heard him talk and thought it is her husband.

"Sometimes when I walk into the living room and talk to the children while she is in the kitchen or bedroom she thinks it is her husband talking and asks; Oh Daddy you are back?

Even the children cannot tell us apart.

"It is until he gets closer that they realize it is not him," he recounts.

Namutebi concurs with her husband and explains that sometimes the children run to hug Waswa thinking it is their father who has returned from work.