Dr. Jawara Lumumba, a prominent global promoter of ethical work culture has said it is very important for every workplace to recognize its best performers, adding that by so doing, organizations are encouraging others to work very hard.

Employee recognition is the timely, informal or formal acknowledgement of a person's or team's behaviour, efforts or business result that supports the organization's goals, and values, and which has clearly been beyond normal expectations.

Speaking during the first ever awarding ceremony to organizations that have tried to exhibit high ethical work practices at a dinner held at Hotel Africana on Friday, Lumumba noted that by recognizing best performers either individually or as a team shows that their work is highly valued.

"Best performers act as role models and by recognizing their efforts, you are encouraging other employees to work very hard, this leads to the growth of the organization as well as individual growth," he added.

Recognizing best performers brings about greater employee satisfaction and enjoyment of work, the individual or team spend more time focusing on the job and less time complaining, comes with high loyalty and satisfaction from customers.

Teamwork between employees enhanced, retention of quality employees increases, therefore lower employee turnover, and also there are lower negative effects such as absenteeism and stress.

On the other hand, Lumumba who has travelled in over 100 countries addressing different people on ethical-work related issues said it is also important for leaders of organizations to often remind employees about the organization's vision and values so that everybody understands what they are and work towards achieving them. 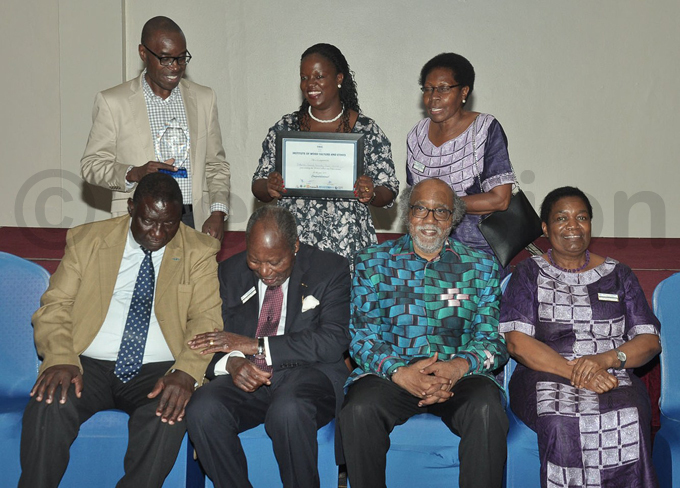 Lumumba poses with the NSSF team and some of the judges. Photo by Lisa Anenocan

"The vision and values of the organization should not only remain on paper. Having a vision on paper does not make things happen. It is supposed to be shared continuously so that it stays present and familiar to employees to make its execution possible," he said

The event was organized by the Institute of Work Culture and Ethics (IWCE), a local Non-governmental organization founded to spearhead a renewal of work ethics in the country.

During the event organisations, both from the private and public sector, then development sector that the public believed were trying to exhibit ethical work practices were awarded placards and certificates.

The nominations into the process were done by the public; any member of the public could nominate any organization of their choice, and a total of 29 organisations were nominated.

A team of judges were appointed to vet the nominations and identify model institutions in each of the categories.

The executive director of IWCE, Sam Bwaya said some of the attributes considered in choosing the outstanding model organizations include; having open, regular and effective communication channels and freedom of expression by employees, a clean and safe environment among others.

More elderly to get gov't support